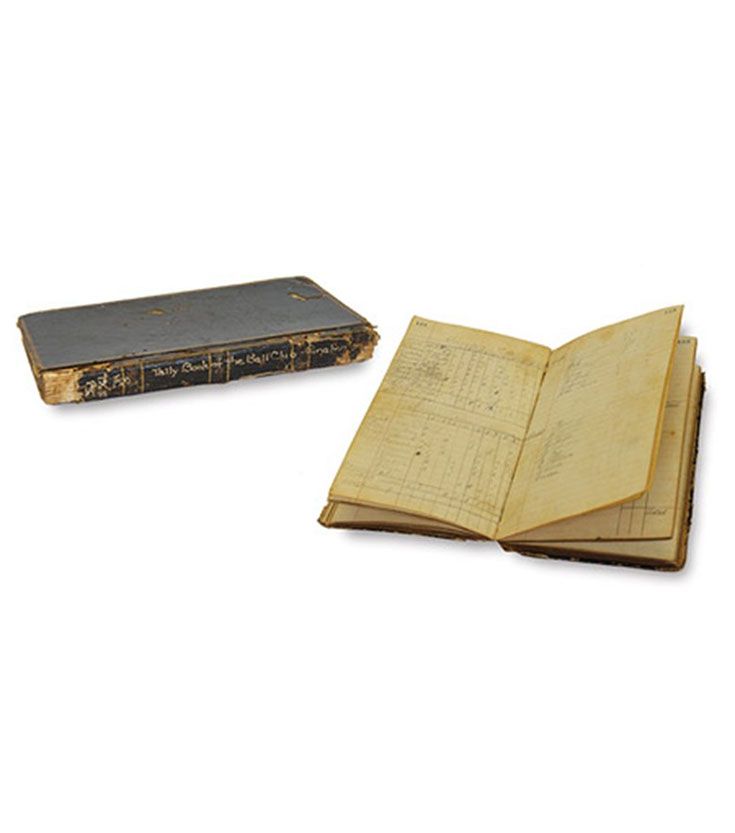 In 1906, Arthur C. Alexander (1883), son of former Punahou President William DeWitt Alexander (1849) wrote to the editors of the Oahuan after discovering this baseball tally book in his father’s attic. The first entry was dated Oct. 14, 1869 and the record extends as late as 1878.

“At that time there were no good baseball nines (teams) for the ball players at Punahou to contest with,” writes Alexander. “To keep up the sport, a rather unique and ingenious scheme was devised. Two nines were chosen from among the boys and these played a few innings each day, either before school opened at 9 a.m. or during the long recess from 12 to 1 p.m. This little book contains a record of the daily scores made by these nines. At the end of each week the daily scores were added together to make a grand total. Two new nines were then chosen and a new series of games was begun.”

Boys played on a makeshift field near the building known as the Octagon and today’s Pauahi Hall. Alexander notes that, “Mitts, masks and body protectors were then unknown, in fact, I believe the boys of that day would have scorned to use them. The pitching was underhand with a straight arm, the delivery of the ball being below the hip. Curve pitching was then unheard of.”

According to Dan Cisco’s book “Hawai‘i Sports: History, Facts, and Statistics,” early prototypes of baseball were introduced in Hawai‘i in the 1840s, and boys at Punahou (then Oahu College) played variations such as one-old-cat, two-old-cat, and aipuni, which had two batters. Sandbags were used as bases and the boys made their own bats and balls. The bats were made of hau and kukui branches from Manoa Valley.

In 1849, Hawai‘i became the new home of Alexander Cartwright, who is considered the father of modern baseball after having drawn up the rules that established the game we know today while living in New York. Cartwright’s eldest son, DeWitt, and two other sons born in Hawai‘i, Bruce and Alexander, would eventually attend Punahou.

An impressive historical figure aside from baseball, Cartwright founded the Honolulu Fire Department and was its chief for more than ten years. A friend of the Hawaiian royal family, he helped establish Queen’s Hospital, the Hawai‘i Library System and the Pacific Club. As advisor to King David Kalakaua and Queen Emma he encouraged the growth of baseball in the Islands until his death on July 12, 1892. Many baseball personalities, including Babe Ruth, have visited the granite monument that marks his final resting-place at O‘ahu Cemetery.

Baseball had been growing in popularity at Punahou School since the 1860s and there is some debate about whether the sport was introduced to Hawai‘i by Punahou or by Cartwright. The reality is probably a combination of the two. In 1852, Cartwright paced out Hawai‘i’s first baseball field at the Makiki Reserve, now known as Cartwright Field, on Ke‘eaumoku and Kinau streets. Being a short distance from Punahou’s campus, it’s difficult to imagine that the games taking place there wouldn’t have attracted the interest of Punahou boys. Taking into consideration the fact that three of Cartwright’s own sons attended Oahu College, the connection is nearly indisputable. One of the two team captains noted in the Baseball Tally Book in 1873 is Alexander “Allie” Cartwright III.

William Richards Castle (1868) remembered games of aipuni and wickets at Punahou in the 1840s and 1850s. Castle also attended Oberlin College, where he was “initiated into the mysteries of baseball” and upon his return to Hawai‘i in 1866, he proposed to introduce the rules of baseball as it was being played out East. The Punahou Baseball Club was soon formed, which Castle said “was for a long time the model for baseball throughout the Kingdom of Hawai‘i.”

He also wrote that, “A good many years after 1866, in traveling through the Kau district on Hawai‘i, I was interested and surprised to come across a baseball game playing in Waiohinu. I watched it for a while. All the residents for miles around were on hand to see the game. I asked an old fellow what it was and he replied, ‘He Kinipopo hou Keia, mai Punahou mai,’ which greatly comforted my soul, for I saw that the good work of introducing the real game of baseball had availed, and to Punahou belongs the honor of introducing baseball into Hawai‘i.” 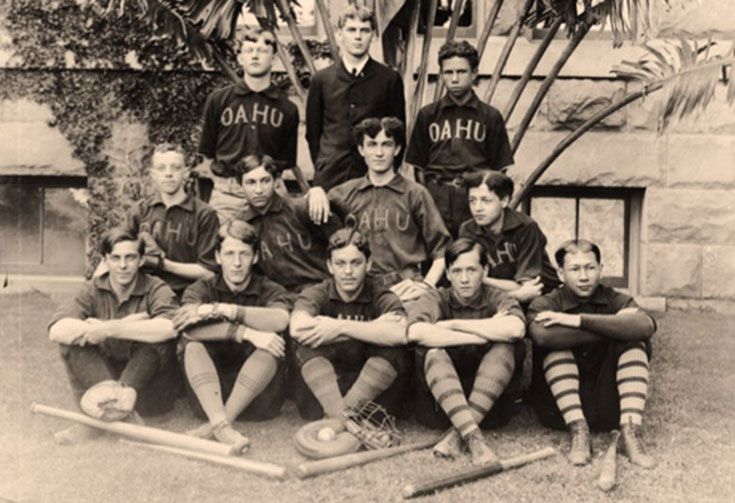 Castle does mention Cartwright as someone with whom he had frequent business dealings. “While in his office one day several years after my return he surprised me by saying he was an old ball player but added that he hardly recognized the game ‘as played now.’ However, his interest seemed as keen and alive as ever and I remember seeing him at Punahou several times, watching the play as it had been recently introduced.”

The first mention of baseball in Hawai‘i newspapers was an 1860 article in the Polynesian, which reported that, “Quite an interesting game of ball came off yesterday afternoon on the Esplenade between the Punahou boys and the Town boys.”

Punahou’s team played early matches against the Atkinson School, the Royal School and the Fort Street School. In the early 1870s, the arrival of a teacher and former ball player from Amherst, Mr. Chickering, amazed boys and men alike with his dexterity with the bat and ball (Alexander notes that the tally book scores for 1871 “show a marked improvement in playing ability.”) At one Punahou match, Chickering struck so hard that he broke the bat, sending one half of it flying to second base and the ball clear over the wall.

The tally book records two games played in 1875 that were composed of all-female squads, and in 1878 the score of a match played in Makiki between Punahou and the Royal School was entered, with Punahou winning by 36 runs to 6.

By the late 1880s, baseball had become quite popular in Honolulu and club teams were popping up everywhere. The first baseball league was formed in 1884, with four teams that played at what would eventually be renamed Cartwright Field. With the organization of the Interscholastic League of Hawai‘i in 1909, baseball became one of the sports in which schools could officially compete with one another, initiating an impressive run of Punahou ILH and state championship titles.

The Friend, March 1924, “The Introduction of Baseball,” by William R. Castle