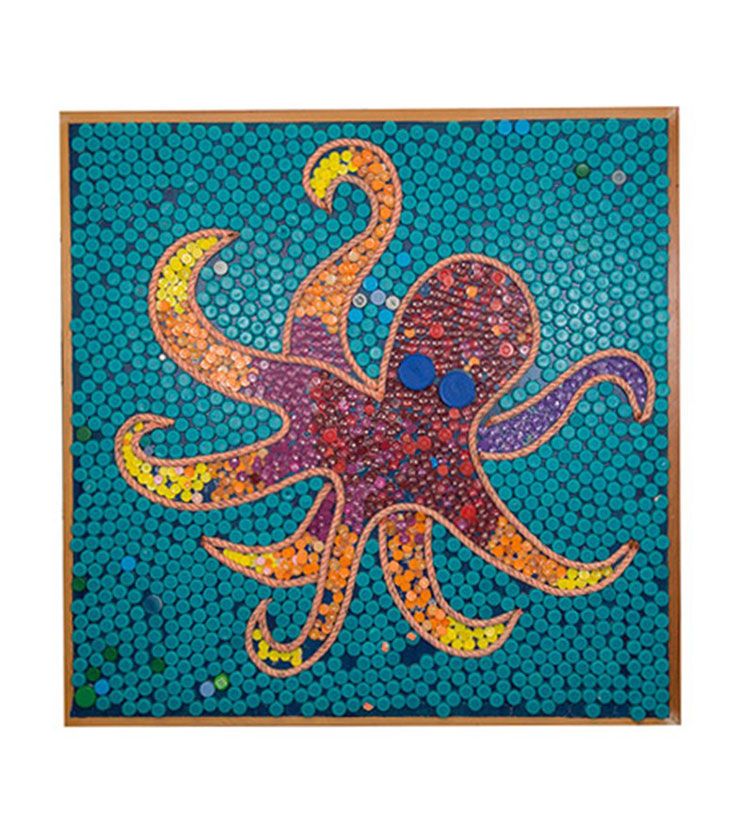 This he‘e or octopus made out of recycled bottle caps was part of a project initiated by the Luke Center for Public Service in preparation for its 2012 Sustainability Fair. It was the result of collaboration with Susan Scott, the author of the “Marine Watch” column for the Honolulu Star-Advertiser about ocean issues, and an artist of recycled marine debris in her spare time. At the Sustainability Fair, students got to fill in different shapes of marine life with the bottle caps as part of a hands-on recycled arts experience. Later, the caps were glued in permanently to the he‘e, serving as an inspiration to other teachers for rainy day art projects and also to other organizations doing education about marine ecology and recycling waste.

“The he‘e symbolizes a lot of things for Luke Center,” says Luke Center Director Carri Morgan. “It represents creativity, doing something that’s hands-on and fun for students across grades K – 12. Our youngest students loved doing it and our older students appreciated the fact that they were raising awareness.” The object is one example of the myriad ways in which service learning has become synonymous with a Punahou education in the past decade, thanks in large part to the efforts of the Luke Center for Public Service.

The center’s origins date back to the early 2000s, when faculty and students were challenged by President Jim Scott ’70 to build a culture of public service at Punahou. Initially, the Haas Center for Public Service at Stanford University was used as a reference, following the visit of its service-learning program director Kent Koth in 2001 as the Chapel’s first Spirit and Service speaker. His visit, along with President Scott’s call to action, laid the foundation for Luke Center’s realization.

Luke Center is perched above Ka Punahou’s waters, nestled between Thurston Memorial Chapel and the chaplains’ offices – a location that intentionally links the center to the campus’ spiritual core. With the support of the K. J. Luke family, individual donors and local foundations, the center opened its doors in April 2004. Since then, its staff has worked with students, faculty and community organizations to promote social responsibility, the final pillar of Punahou’s mission statement.

The center’s work has always revolved around student leadership, embodied in the Luke Leaders program, which enables Academy students to deepen their sense of social responsibility through service learning. In a community mapping process, the initial group of 12 Luke Leaders identified three overarching themes that they would address: Hunger and Homelessness, Advancing Literacy and Environmental Sustainability.

Over time, these themes developed into school wide initiatives and annual events. For example, Luke Center conducts a Food Drive in conjunction with the Chapel’s Hunger and Homelessness theme each year. During the drive, students, faculty and staff collect thousands of pounds of dry goods for the Hawaii Foodbank. The Book Drive collects books of all genres that are then donated to public libraries around the state. From 2007 – 2014, Luke Center hosted a Sustainability Fair each spring to promote awareness of environmental issues and encourage students to lead greener lives.

The center’s staff also encourages students to pursue their individual passions, providing space and support for student-led projects that have often led to visible changes on and off campus. For example, the first group of Luke Leaders met with administrators to implement the recycling bin system at Punahou, placing the familiar buff and blue recycling containers at strategic points around campus to divert waste from Hawai‘i’s landfills.

Through collaboration with faculty, service-based curricular opportunities have formed across campus. Thanks to the center’s thick network of relationships with community groups, a particular teacher’s interest can easily be tied to the appropriate service activity, often giving rise to ongoing projects such as regular student visits to the residents of Central Union Church Adult Day Care or to patients at Shriner’s Hospital.

Over the years students have been invited to participate in service activities through the Luke Leader and Luke Friend programs. Luke Leaders meet with the Luke Center staff on a regular basis to plan ongoing service projects. Students form interest groups to conduct brainstorming sessions, field surveys and take action on their chosen issues. They also participate in service activities on and off campus during the school year. Luke Friends support school wide service themes by helping to raise awareness, sort food and books, and help prepare for campus events.

The center’s 10-year anniversary, celebrated in 2014, brought a number of former Luke Leaders back to campus to honor the growing tradition of service learning at Punahou.
Back