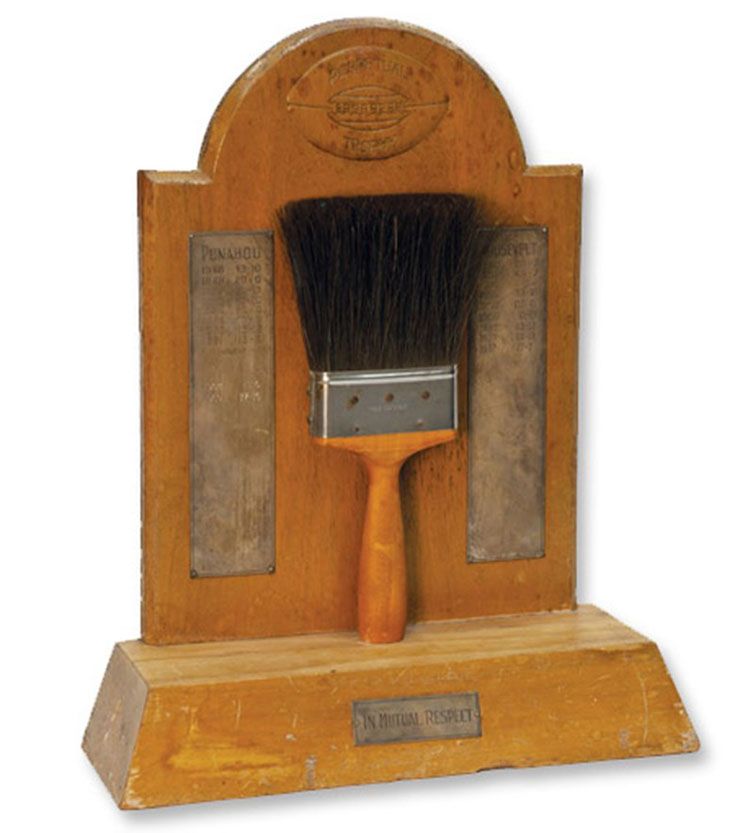 In the world of college football heated rivalries are represented by memorable trophies. Indiana and Purdue play for the Old Oaken Bucket. The Stanford Axe goes to the winner of the University of California Berkeley and Stanford University contest. Either Colorado State University or the University of Wyoming takes home the Bronze Boot each year.

Geographic proximity fuels many of these rivalries much as it fueled the rivalry of Punahou School and President Theodore Roosevelt High School: two schools located literally just down the street from each other.

Roosevelt’s entry into the Interscholastic League of Honolulu planted the seeds of the rivalry. While Punahou had been a league member from the ILH’s 1909 launch, Roosevelt was founded in 1930 and would not field a football team until the fall of 1932, the year in which it moved to its current Nehoa Street location.

Given their novice status, sports fans and reporters speculated openly about the Rough Riders’ readiness for prep school competition. Facing its first test against its Makiki neighbor, there was a lot on the line for Roosevelt.

A young Lex Brodie – yes the Lex Brodie of tire fame – responded to this pressure by deciding that Punahou’s buff ’n blue Pauahi Hall dome might look better painted in Roosevelt’s green and gold school colors (out of deference for Leileihua High School, Roosevelt’s colors were changed to today’s red and gold in 1939). Carrying a gallon of green paint and some brushes, the Roosevelt senior walked up the Pauahi steps with classmates Rufus Hagood and Gibby Rietow. Following close on their heels was Hagood’s good ol’ poi dog.

Finding the front door unlocked, there was only one more obstacle between the trio and their goal: a locked door to the dome ladder. As the tallest, Brodie wedged himself through the transom, then led the others to the trap door. Then they were there, right on the ledge of the Punahou dome.

Zeroing in on their objective, they swiftly painted the blue pie sections green before shimmying down to the ground via a conveniently sited plum tree. Washing the paint from their hands, they laughed and reveled in their accomplishment before going their separate ways. 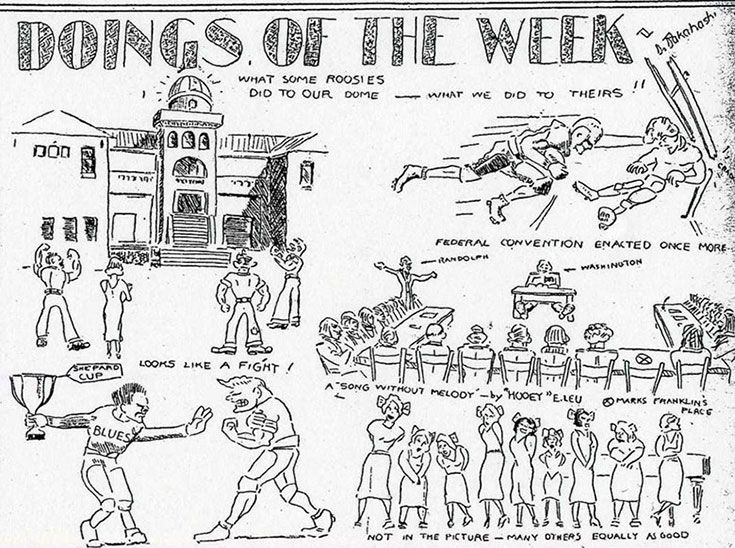 As he rode the streetcar to school the next morning, Brodie savored the sight of the glossy green paint on Pauahi’s dome. But his pleasure would be short lived. Summoned during the second period to Principal Crawford’s office, Brodie arrived to discover that Hagood and Rietow were already there. A scowling Crawford then approached and, upon parting Brodie’s hair, rhetorically asked, “How’d this green paint get in here?”

How were the miscreants fingered so fast?

The answer was easy: Rufus Hagood’s dog. It seems that, when Rufus’ younger brother Bobby ’40 arrived for school at Punahou that morning, the campus was in an uproar over the dome painting. Nearing Pauahi Hall, Bobby was surprised to find his family mutt sitting patiently by the door still waiting for his master’s return.

Bobby wondered aloud why the family dog was there and the boys were busted. Miraculously, they got away with a reprimand. But the real punishment lay ahead.

Roosevelt would fall to the Punahou eleven in what was, for Punahou fans, a delicious defeat on Alexander Field. Ka Punahou editorialized on November 8 about the hard-fought victory:

“An eye for an aye, a tooth for a tooth” – the ancient proverb came dangerously near forcing Punahou and Roosevelt into open warfare last week when we gaped up at Pauahi dome to discover that it had been painted green and yellow – Roosevelt Hi’s colors – right under our very noses. We rose up in anger and humiliation. It was an idea unheard of. We resolved to punish rightfully the adventures (sic) who would dare to conceive such a plan. We did. The wind was taken right out of their sails when we defeated them 32 – 6 in the game Friday. Roosevelt, in our opinion, could hardly do other than sneak home, thoroughly ashamed of themselves.
But the editorial noted that Punahou also bore some shame:

Even while Roosevelt was supplying paint to restore the natural buff and blue to the dome, a bunch of alumni arose in wrath and slashed paint over the Roosevelt buildings and campus. They evidently considered that the efficient way to show their devotion to the alma mater was by applying of much buff and blue coloring matter; perhaps they didn’t trust to our ability to smash Roosevelt through our football team. … Roosevelt might have returned the compliment … They didn’t, however, proving they were good sports and were willing to fight it out on the field … If they can be friendly, so can we, so let’s call it quits. 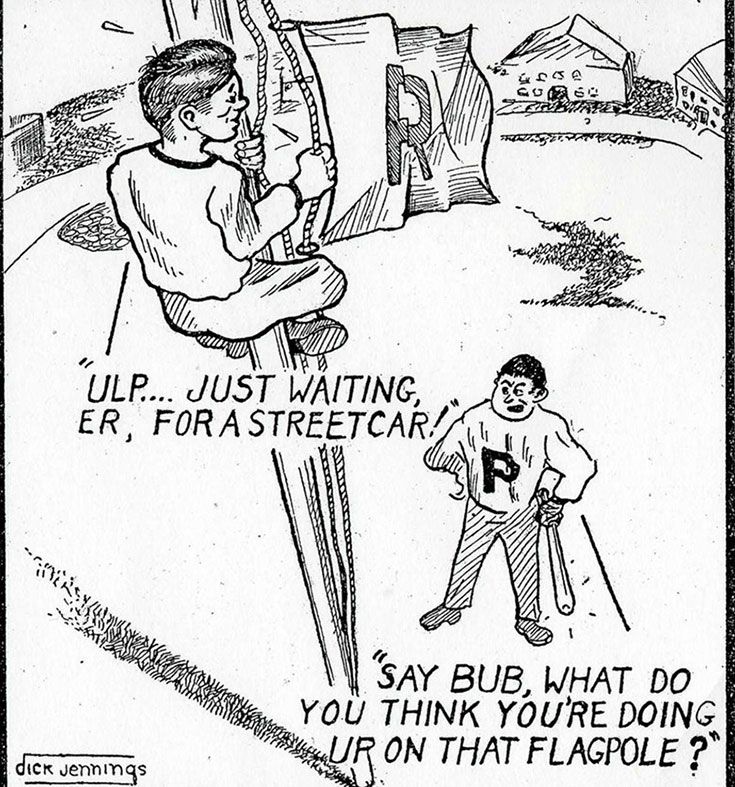 The trouble had started when Punahou students arrived at school on Friday and found the Pauahi steps painted with Roosevelt slogans in green paint. That noon 10 cars of Punahou students with a “Sock the Rosies” sign paraded past Roosevelt. Roosevelt students then pursued the provocateurs back to Punahou and matters escalated from there. Rocks were thrown, cars were damaged, and a Roosevelt student went to the hospital. Fought by both the students and alumni of each school, the skirmishes continued until late into the night.

Reaction to the brawl was swift both in the local press and from school authorities. Punahou’s President Oscar Shepard (1929 – 1944) declared, “We want friendly rivalry, and we deprecate any attempts to put our rivalry upon any other basis.” The words must have hit home because, when Punahou beat Roosevelt 44 – 0 in the 1935 game, “Ka Punahou’s” greatest complaint was that the cheering section “conceitedly started singing ‘You Can’t Beat Us’” during the last few minutes of the game.

Work continued to bridge the divide. A 1937 joint dance led to 47 absent students the following Monday. This caused Ka Punahou to speculate that a new malady, “Rooseveltitus,” was affecting the students. In 1939 Roosevelt students gave exhortations for the welfare fund and later danced and sang for the gathered Punahou student assembly. Punahou songleaders Suzanne Biven ’40, Lydia Sutherland ’41, Rosemarie Price ’41 and Lila Larsen ’40 shared a pre-game lunch with Roosevelt songleaders Anna Kufferath, Phyllis Chillingworth, Dot Van Nuys and Dot Fisher. Afterwards they decorated their cars in school colors side-by-side before parading to the stadium.

Despite these efforts the hijinx continued. A flock of buff and blue balloons greeted Roosevelt students in 1939 when they entered Carter Auditorium. More perplexing, though, was the subsequent appearance of the Roosevelt flag on Punahou’s flagpole. With the ropes cut, it flew merrily over the campus for a week until a professional pole climber took it down.

By 1948 what had started as a schoolboy prank had morphed into serious vandalism. Writing in The Honolulu Star-Bulletin on October 28, 1948, Peggy Hickok reported that:

Roosevelt’s flag has been flying high at Punahou school all week until the heavy winds blew it down Wednesday. Roosevelt students … also did a bang up job of splotching the Punahou school’s senior academy principal’s office window, the chaplain’s office, the patio of Bingham hall, Bishop hall … with messes of hard to remove red and yellow paint. … The paint on Punahou’s war memorial plaque was the greatest insult to the historical campus. Last year Punahou students burned “PUN” on the Roosevelt lawn and three years before that threw bottles of turpentine and paint on the Roosevelt auditorium. 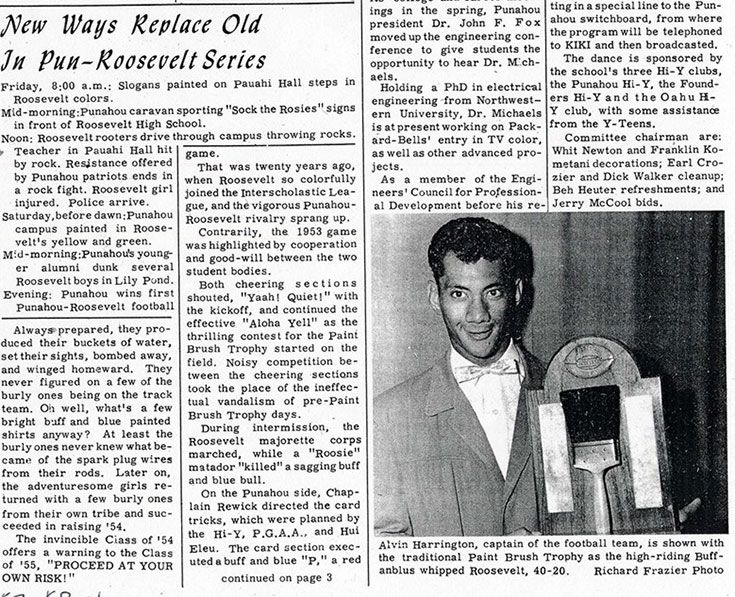 It was time to put an end to the mischief. Speaking in his Punahou School Oral History, Dave Eldredge ’49 recalled what happened during his senior year:

I was lucky enough to serve on a committee with our student body president, who was Buzzy Thompson ’49. Charlie Ane ’49 was also on the committee, one or two other girls, one faculty member, the principals of both schools as well as students from Roosevelt. We had a meeting at Punahou School to see what we could do about curtailing all of this vandalism. Out of this meeting came the idea of this Paint Brush Trophy. … And what was more appropriate than a paintbrush because that was what we were doing, running around and painting each other’s campus.

The trophy would travel between the schools and would reside with the latest winner. With any luck battles would henceforth be fought on the playing field rather than on the school campuses.

Did it work? Sort of. Yellow dye still appeared in swimming pools and letters in burned grass. But the trophy helped to dull the allure of the paintbrush and, year over year, reports of vandalism gradually declined. Indeed, coverage of and interest in the game itself also declined, meriting no Ka Punahou coverage in 1968 and a mere 86 words in 1969.

Then, in 1970, Roosevelt joined the O‘ahu Interscholastic Association. The paintbrush rivalry was a thing of the past.

In an interesting postscript to the paintbrush saga, Eldredge described saving the iconic trophy from the trash can while workmen were cleaning out Armstrong Hall in the 1980s:

I said, “No way.” … I felt that this is a trophy that I was personally involved in. I’m going to pick it up. I’m going to take it home. I’m gong to keep it … As one of the gifts of my graduating class … we completely refurbished the Paint Brush Trophy and returned it to Punahou in memory of the old Paint Brush games between Roosevelt and Punahou.

Today, the Paint Brush trophy is maintained as part of the Punahou School Archives collection.