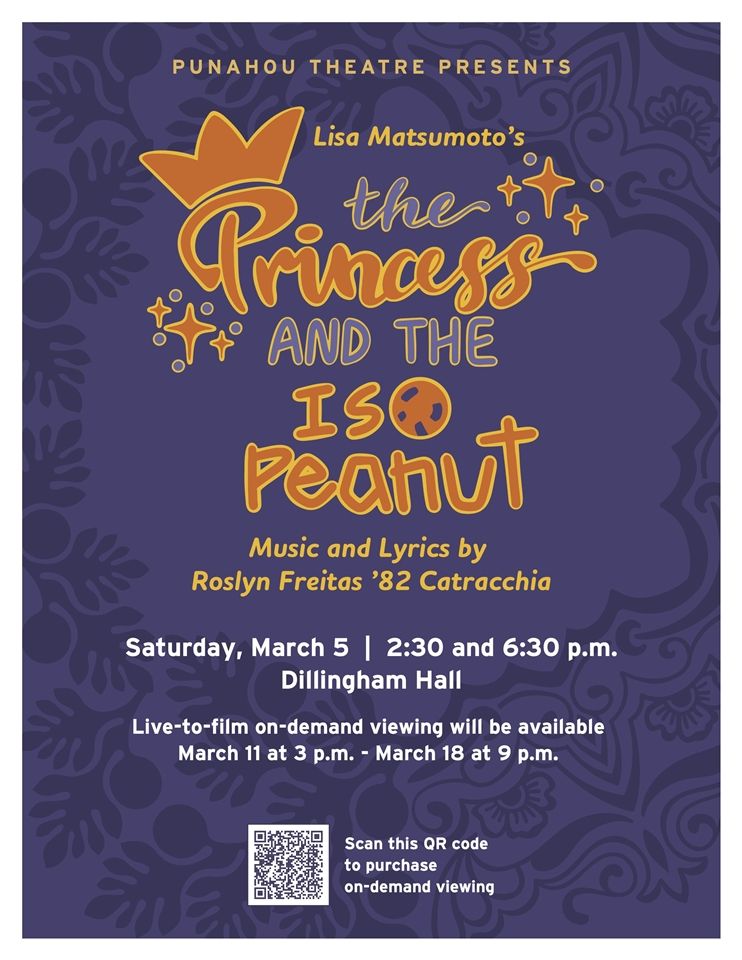 Punahou Theatre Presents “The Princess and the Iso Peanut”

Performed on Dillingham stage, a cast and crew of over 50 Punahou students are ready to entertain you with their talents in design, tech, acting, and singing. The musical is an adaptation of the familiar fairy tale “The Princess and the Pea” with a multicultural twist, telling the tale of a traditional fairy tale princess who falls in love with a Hawaiian local Japanese prince.
On-demand viewing will be available March 11 at 3 p.m. –  March 18 at 9 p.m.


About the Show
The Princess and the Iso Peanut made its debut in the Summer of 1999,  produced by Diamond Head Theatre, in association with ‘Ōhi‘a Productions, playing to sold-out audiences on O‘ahu, Hawai‘i. Due to its success and popular demand it returned for a revival production in the Summer of 2000, for another sold-out run, playing to over 22,000 audience members collectively in two productions.
The musical is an adaptation of the familiar fairy tale “The Princess and the Pea” with a  multi-cultural twist, telling the tale of a traditional fairy tale princess who falls in love with a Hawaiian local Japanese prince. Cultures collide when the formal, traditional, storybook kingdom of Allyria encounters the contemporary, gregarious Hawaiian-Japanese local Yamamo to kingdom. Throw in a boisterous, fun-loving band of pirates and the outrageous adventure begins.
Although the show’s primary goal is to entertain, it aims to inspire us to seek our true passion in the quest of a life lived with fulfillment and happiness. The story illustrates how status and material wealth alone cannot buy happiness and that parents must not dictate, but instead gently guide their children  to help them find their own path in the world. Using humor, the story also hopes to bring diverse cultures together, demonstrating how although we may all have our own traditions and customs which differ from others, beneath it all, we all share  the same hopes and fears, and in many ways are not  much  different from one another after all. The show hopes to encourage each of us to celebrate and embrace our own cultural heritage, quirks and all, while respecting and appreciating the diversity of other cultures so we may find tolerance, acceptance, peace and harmony. Like many fairy tales, the story also proves  that love does in fact conquer all, and in this case, breaking through cultural barriers.
Finally, the show celebrates Hawai‘i’s spirit of aloha, sharing the “island-style” way we live, love and laugh together, including our ability to laugh at ourselves. The musical contains Hawaiian local slang, dialects and nuances, however, it aspires to be enjoyed by all. With the hope of introducing Hawai‘i’s wonderfully rich culture to promote understanding and appreciation for ALL cultures and people.