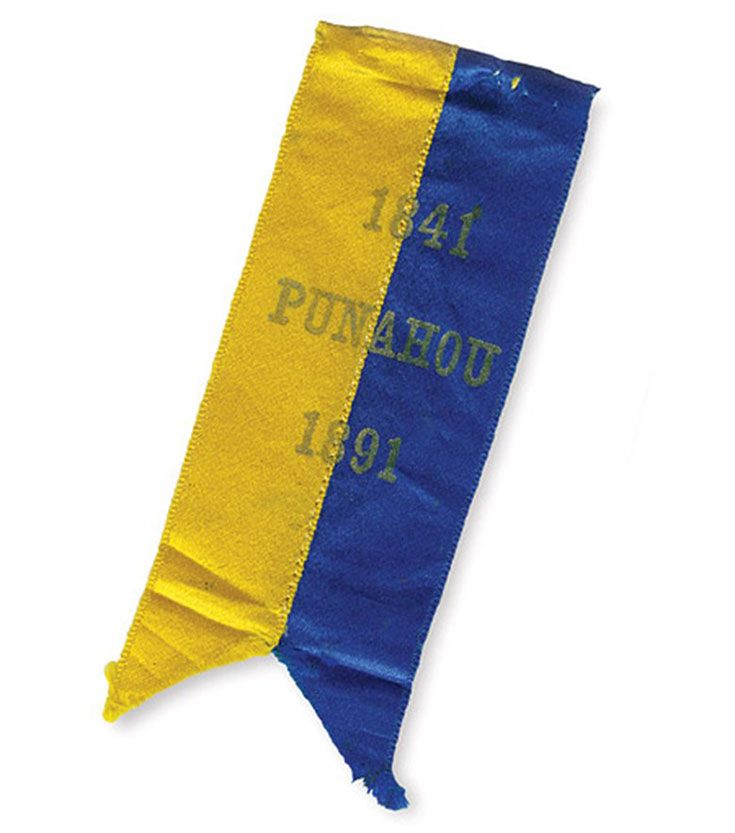 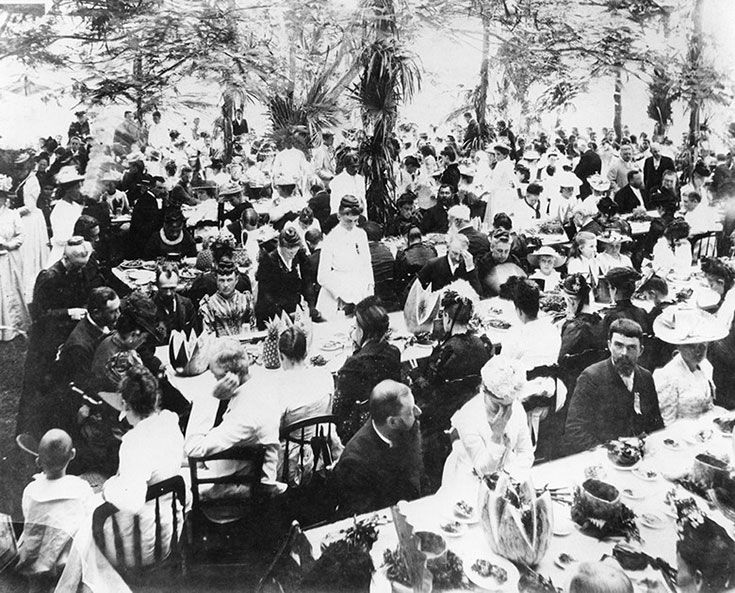 According to the Report of Committee, made on Dec. 16, 1890 by A. F. Judd and W. R. Castle To the Trustees of Oahu College, this ribbon was worn by alumni attending the School’s 50th anniversary jubilee celebrations, which were celebrated on June 25 and 26, 1891.

“The committee recommend[s] that the badge of the College colors (blue and yellow) be provided, to be worn on that day by every one who has attended school at Punahou, the Trustees and Officers.”

Alumni shared in the festivities from around the world. Many wrote to the College sharing memories regarding the school’s earliest days. Others came in person. Traveling from Virginia’s Hampton Institute, Brigadier General Samuel Chapman Armstrong (who attended Punahou from 1844 – 1859) addressed a packed Kawaiaha‘o Church crowd the evening of June 25. He noted that he “was born at Wailuku, but was born again at Punahou.” His school days were “simple things, of severe discipline, of particular experience—too rich and rare to lose” but were well valued for, in a nod to his eventual profession, “the battle of life is often won at school.”

Other events included athletic contests, public receptions, and the reading of the Jubilee Poem, “Ten Times One,” by Emma Smith (who attended Punahou from 1853 – 1863) Dillingham. All Jubilee activities were well attended but none as well as the highly anticipated finale: a luau and collation.

Held on campus makai of the tamarind tree in front of the former Bingham Hall (1883 – 1959), the feast was laid in the College dining room and verandahs of the lower floor and attended by graduates and undergraduates of the school, their families and guests. Among these were Her Majesty, Queen Lili‘uokalani, who brought her suite and members of the Cabinet. The Royal Hawaiian Band provided music.

At 12 o’clock a company of more than a thousand guests partook of a generous banquet, which had been spread on the tables under the lanai. This consisted in part of fish, flesh, fowl and poi, cooked in Hawaiian style, and in part of foreign viands, such as salads, cake, sandwiches, coffee and ice cream. The lu‘au was followed by a series of speeches. It concluded when a group of students, joined by willing attendees, shouted the college yell: “Oahu oa, Oahu oa, Punahou, Punahou, Mau a Mau!” Punahou forever, mau a mau!
Back