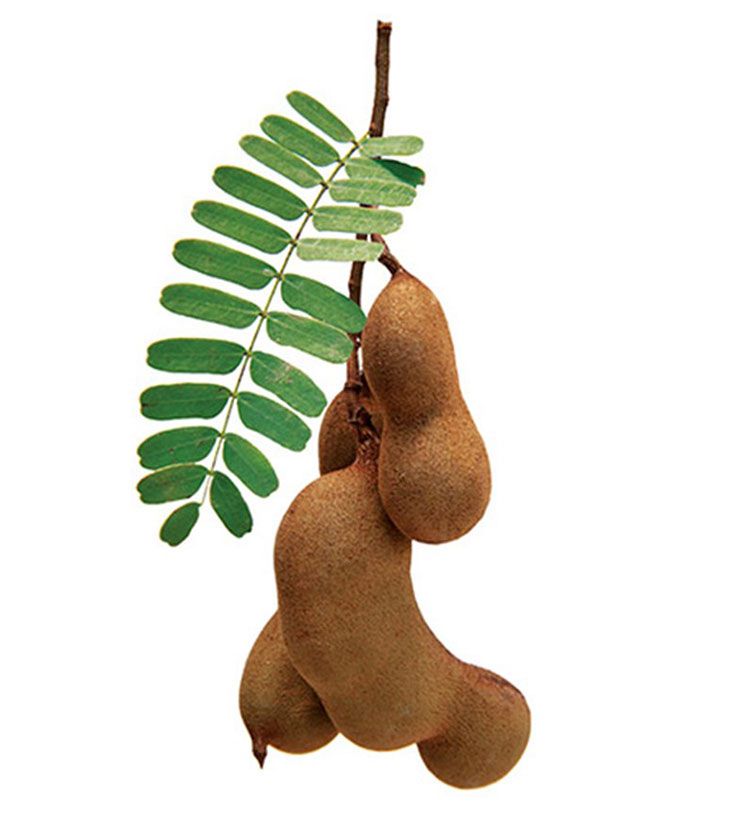 Planted in 1842 during Punahou’s first school year, the tamarind tree (Tamarindus indica) is the oldest living object on the Punahou School campus. In those days, morning and evening student work supplied the school with corn and vegetables for the table. James Alexander (who attended Punahou from 1842 – 1853) noted that, “Sometimes the labor was irksome, and boylike some of them would exclaim of the institution, ‘Punahou-hoe-hoe.’” 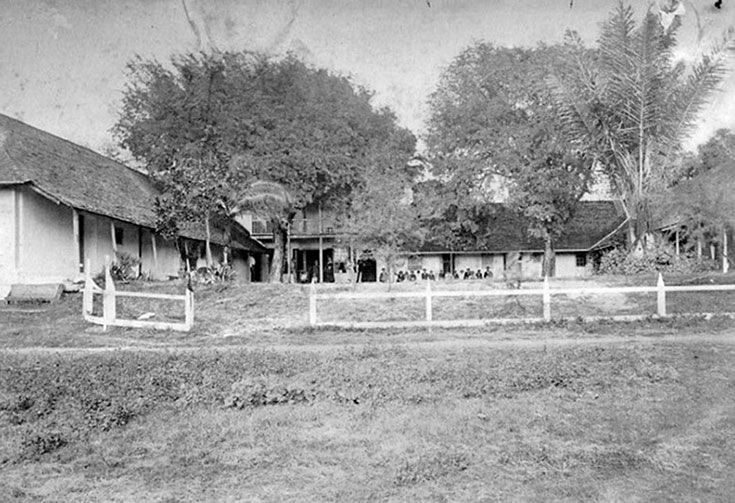 The campus on which the students worked was called “an enclosed plantation” by Mrs. Emily Hoyt Ballard Dole, wife of Punahou’s first president from 1841 – 1855, Daniel Dole.

Here they saw the wind rippling the light green of sugar cane which covered about ten acres of the land, and the darker green of low broad taro patches at the left with pleasant walks between them, bordered by banana trees bearing heavy bunches of fruit. … The only shade trees, a few hau, stood at the back. … Punahou’s spring, after forming quite a large pond, divided into several streams which flowed through the grounds.

One of the early labors included the planting of the tamarind tree. While the names of all but Anderson Forbes (who attended Punahou from 1842 – 1847) have been lost to the sands of time, it is known that the boys planted the tree in the north corner of the original “E” Building’s Ewa Court. An 1865 picture suggests that two tamarinds were originally planted, the other being in the Waikiki courtyard. If this second tree still stood, its branches would overshadow the Sony-Morita Language Laboratory in Cooke Library.

At the time of planting the tree was a seedling, about a year old. It descended from trees first brought to Hawai‘i in 1797 that were planted by Don Francisco de Paula Marin in Pauoa Valley. The species quickly became a favorite of early settlers and was planted on many old homesteads. 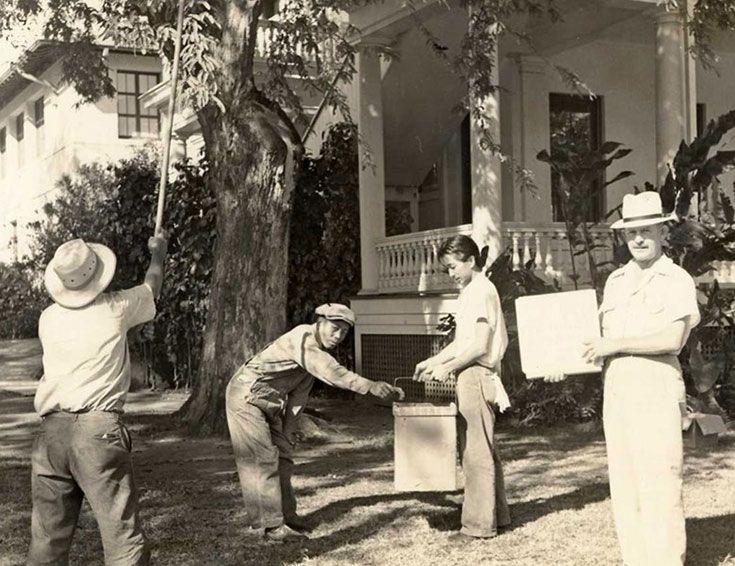 Tamarind trees are slow growing and long lived, with a 200-year life span. Although their origin is obscure, they are widely found in Africa and southern Asia’s drier arid regions, especially in places prone to drought. It is thus not surprising that the tree would so comfortably make its home on the arid Punahou campus and would, by 1858, grow into a tree that Henry Alexander (attended Punahou from 1849-1861) would describe as “a splendid tamarind tree” for the shade it provided on the veranda of the E Building.

Other early memories, such as this shared by Mary Dillingham (1888) Frear, revolve around the tree’s fruit:

The old boys and girls remember not only the tamarind tree of our childhood which still stands in classic pose next to Bingham hall, but also its fruit. Privilege was given some of us to study aloud in twos under the beneficent tree that gave not only shade but a repast delightfully tart in young mouths! After a dull search for the best translation of a Greek passage, how refreshing to smack the rewarding acidity of the fallen, though not forbidden, fruit.

The Reverend Frank B. Withington (1909) credited the tree for inspiring him when he “needed it most” and changing “the whole direction of his life.” Speaking as the tamarind pod he remembered the challenge of his college entrance English exam:

You were stumped, and then you were asked to write a theme on “Your School Grounds.” You looked out through my branches and saw one of the most beautiful school campuses in the world and you described it just as it was and passed the exam. Do you know that the beauty you saw that day started with me.

By the end of its first century, the tamarind was regarded as an integral part of the Punahou campus, a companion as valued as a fellow student or genial faculty member. It was thus not surprising when its birthday was a focus of the Punahou Centennial Celebration. 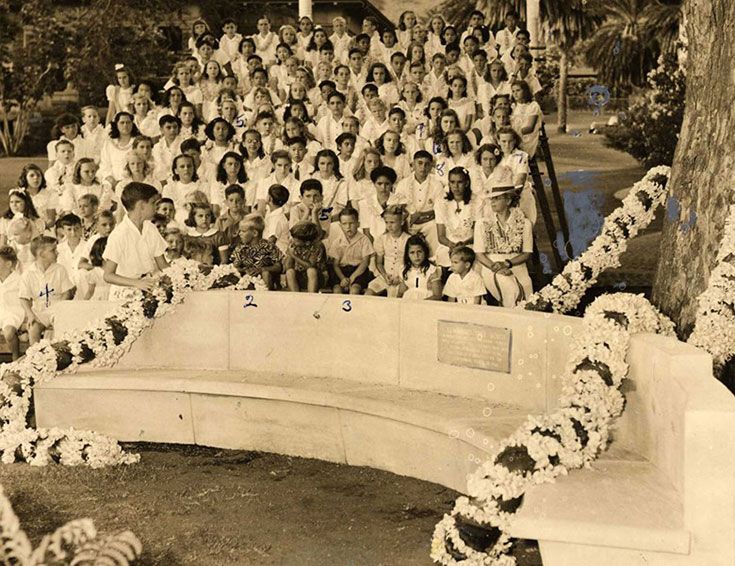 The committee began its work a year in advance of the Centennial, when the tamarind’s seeds were harvested and planted. The plan was to sell one hundred seedlings for $5 each; the funds raised were to endow a Tamarind Tree Scholarship Fund.

“Centennial Week” dawned on June 22, 1941 and with it a whirlwind schedule of church services, luncheons, speeches and pageants. The school, the city, and even the entire territory settled in for what was to be a wonderful celebration.

There was a presentation of a Roy King-designed massive concrete bench – a gift of the class of 1941 – by Shirley Leebrick, class vice president. Placed within the shade of the much-loved tree it bore the following inscription:

TAMARIND TREE BENCH
In memory of the unknown students who planted this friendly tree here during Punahou’s first year. This bench is erected by the centennial class in 1941.
Punahou President Dr. O. F. Shephard (Punahou President from 1929-1944) accepted the bench while remarking that it will “provide rest for tired feet and brains.” Thirty-four young Punahou students, symbolizing the original class, then draped it with a 25-foot lei while 100 older students sang songs appropriate for the occasion.

The elementary children then brought out the year-old tamarind seedlings and placed them on the former Bingham Hall (1883 – 1959) lanai for sale while tamarind punch was served. 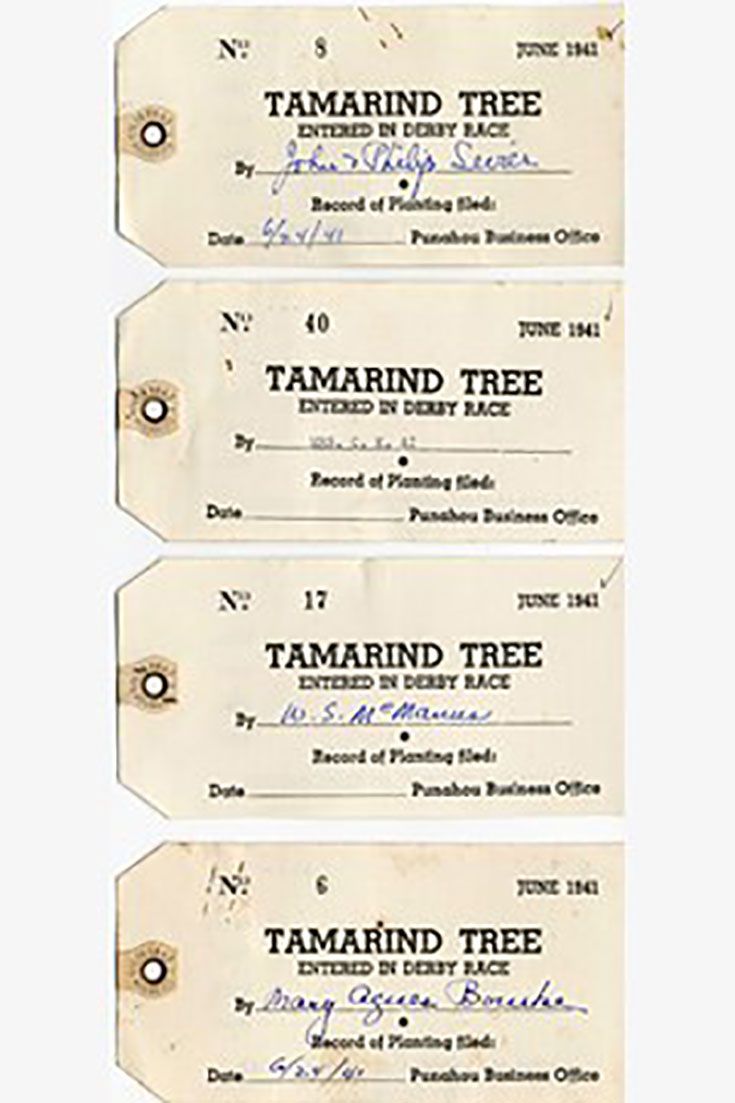 Those who bought the trees also bought the opportunity to compete in the “Tamarind Derby Race.” Entry was guaranteed for each registered seedling planted on the island of Oahu before July 31. Annual tree inspections would be held for five years and prizes awarded to both the purchaser and the school’s Living Endowment fund for the best trees. A final inspection would be held in 1951 with $2,500 paid to Living Endowment in the name of the owner the winning tree.

But no derby winners would ever be named. With the bombing of Pearl Harbor on December 7, 1941 more pressing matters came to occupy the minds of Hawai‘i’s people.

The derby was called off. On September 1, 1942 Dr. Shepard wrote to all derby entrants:

At the Centennial Celebration you kindly purchased a tamarind tree which was registered for the Tamarind Derby. One of the conditions of the competition was that a written report be filed at the Punahou School office between May 1 and June 30, 1942, stating that the tree was ready for inspection. Since no one filed such report and since war conditions hinder or interfere so much with inspections, it has been decided to call off the race.

While we regret this necessity, we are pleased to announce that the Steward of the Race [Walter F. Dillingham] is contributing funds in addition to the $265.00 realized from the sale of trees to purchase $1,500.00 in War Bonds to be credited to the Scholarship Fund of Punahou School. We hope that this provision will be satisfactory to all who entered the Race. 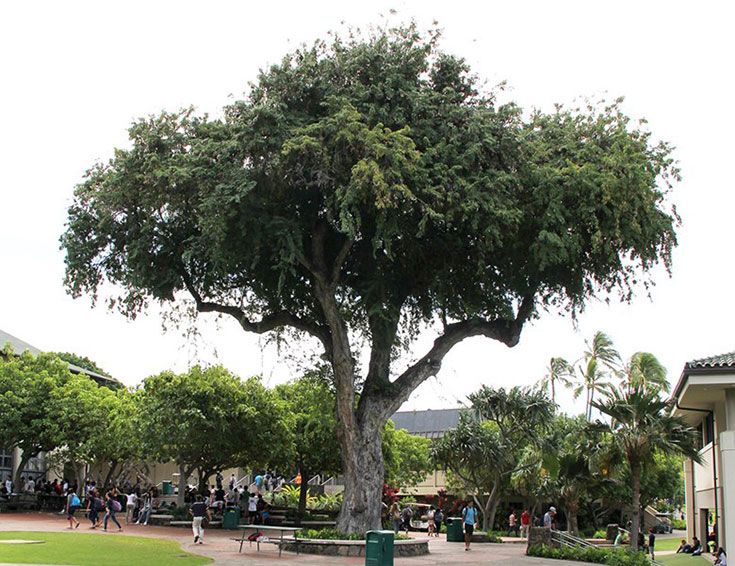 Miller, Carey D., Katherine Bazore and Ruth C. Robbins. Some Fruits of Hawaii: Their Composition, Nutritive Value and Use in Tested Recipes. Honolulu: University Press of the Pacific, 2002: 84.

ODE TO A TAMARIND TREE
Mary Dillingham (1988) Frear
Said Cereus to Tamarind
How proud you are and tall;
Thanks to the boys who planted you,
And the elders who gave me the wall.
I’ve watched you through a hundred years,
Unhurried, dignified
And grand. To be your neighbor
Has given me true pride.
These gentle hands! The seeing eyes
That pierced the coming years!
In gratitude my thorns exult
That they gave her no fears.
All down the century each year
Has offered matchless beauty
To prove the rich rewards were earned
By doing more than duty.
Her praise was all for him who brought
The thorny cactus hither;
Old Captain Brewer who, round Cape Horn
Sailed hither and sailed tither.
Our Tamarind, our Cereus!
Naught shall our homage sever.
Long may they live! Joy they will give
Forever and forever!