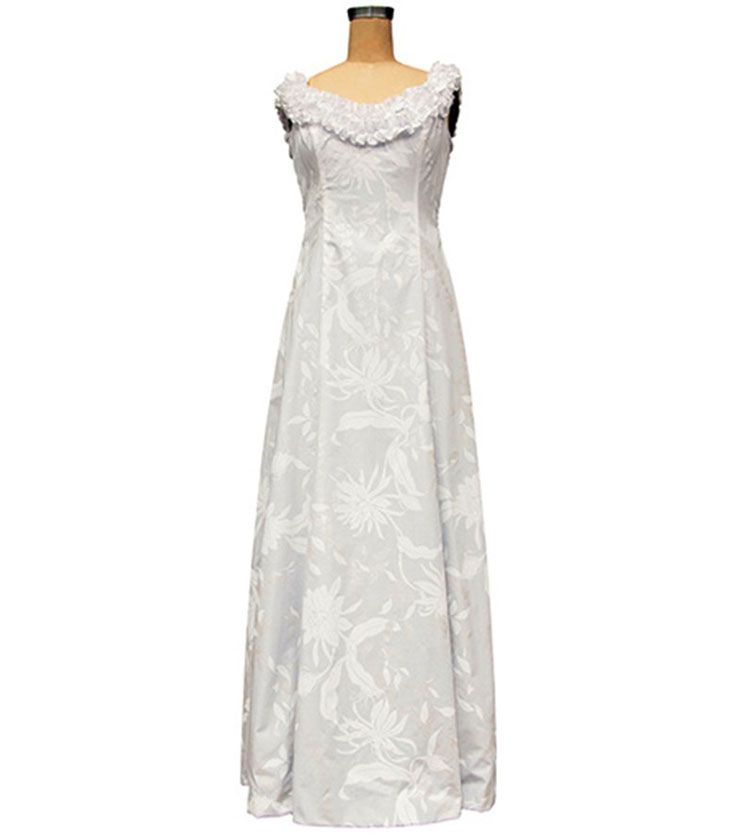 Every May and June in the islands, while other high school seniors march toward their diplomas in ceremonious caps and gowns, Punahou’s senior girls celebrate graduation in a more feminine and Hawaiian style: the holoku.

“It’s something special for our senior girls that marks the occasion,” says Academy Dean and College Counselor Marguerite Ashford ’71 who fondly remembers her holoku with its high neck and long, tight sleeves. “And it brings the girls together as they play an active role choosing the pattern and fabric that’s customized just for Punahou.”

She notes that it can be challenging finding a style that’s cool and comfortable and looks good on all body types. The process begins in the summer when the women’s graduation attire committee selects several fabrics and designs. The entire class then votes in early fall, after a fashion show where girls model the various choices.

An 1888 account describes the school’s lone graduating girl, who was also the class valedictorian, walking down the aisle in a white dress of “nun’s veiling with many flounces” and accessorized with “high twelve-button black shoes with cloth tops and long white kid gloves.” In 1929, girls wore white afternoon dresses with pale pink carnation lei.

It wasn’t until 1963 that girls donned holoku, though the move was not without controversy.

Noting that the dresses were “regal looking” and would add “a great deal of atmosphere to the traditionally Hawaiian graduation,” Ka Punahou reported that many felt the formal white holoku would be relatively useless after graduation and others thought the semi-fitted dress would be unbecoming on certain girls, making them look no better than a graduating class of registered nurses.

After the administration voted “not to disapprove,” the issue was left in the hands of the seniors. With 78% of senior girls participating, more than 82% percent voted for the change. In a final nod towards safety, the faculty stipulated that no high-heeled shoes could be worn with the floor-length gowns.

Holoku first originated in the islands in 1820 as an adaptation of the American day gown. First worn by Hawaiian queens, other Hawaiian women soon embraced the comfortable, everyday dress without a waistline or train. By the time Punahou’s girls chose them for graduation, holoku were long formal gowns reserved for ritual events and associated with Hawaiian culture and ethnicity.

Like most fashions, the tradition at Punahou has evolved over time. In her 26 years at the school, Ashford says the graduation holoku has transitioned into a fully-lined dress eliminating the need for slips. The class of 1994's commencement marked the beginning of sleeveless gowns, a style that has continued to be a favorite of the girls year after year.

And whereas Ashford wore tabis – that comfortable sock-like footwear that originated from Japanese fishing shoes – today's senior girls walk, run and skip their way across the commencement stage in sandals

But whatever the form or accessory, the holoku remains an enduring symbol of Punahou graduation and a shared experience linking generations of Punahou alumna, even within families. Ashford remembers her older cousins wearing holoku, and her daughter who graduated in 2007 still has hers.

She adds, “In my day, a number of girls were married in their holoku [though I] don’t think that happens anymore.”