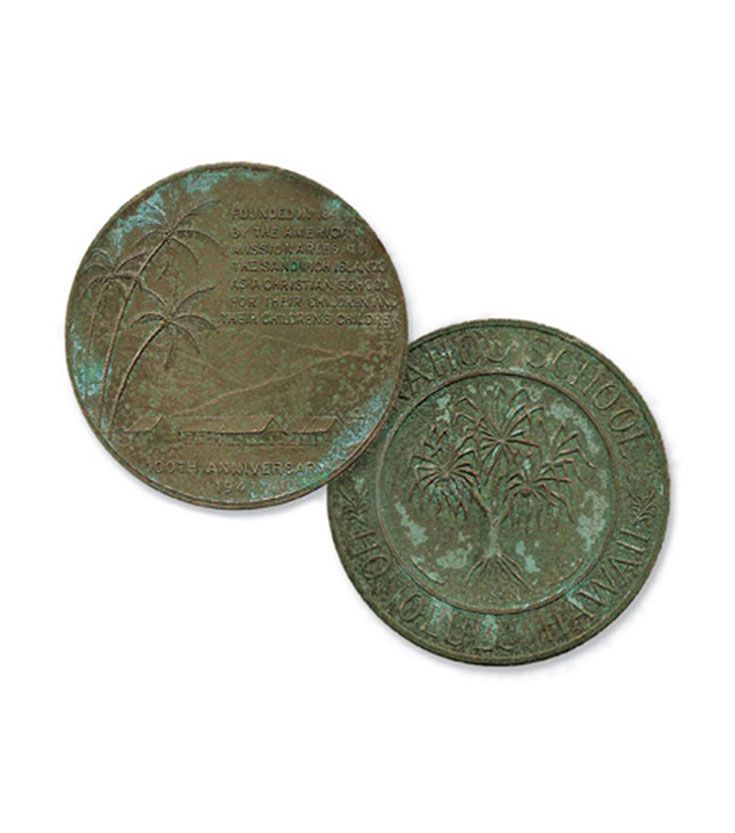 This medal, created for Punahou’s centennial anniversary, was given to former Punahou parent Sara Fuller Hoddick. The School seal is featured on the front, and the inscription on the back reads: “Founded in 1841 by the American missionaries to the Sandwich Islands as a Christian school for their children and their children's children.”

The 1941 centennial celebrations were still fresh in people’s minds when Pearl Harbor was bombed and the U.S. Army Corps of Engineers occupied campus. After a few frantic months, an agreement was reached with the University of Hawai‘i for the rental of its Teacher’s College facilities, which would house most Punahou students for the duration of the war. Hoddick was instrumental in this transition, and received the Punahou medal in gratitude from the School. Her daughter, Fredericka, attended Punahou for the fall semester in 1941 but moved to the East Coast after the bombing. She in turn gave the medal to her daughter, SaraKatherine Goldsmith ’76, who recounts that: “My grandfather was actually working in Pearl Harbor the Sunday of the bombing and did not come back home until the following Tuesday night.”

Goldsmith and her brother, Gordon ’78, both graduated from Punahou and she maintains close ties to the School, despite living in Washington state: not only did her son Benjamin attend Punahou’s Summer School for years, but she has never missed a Class Reunion.