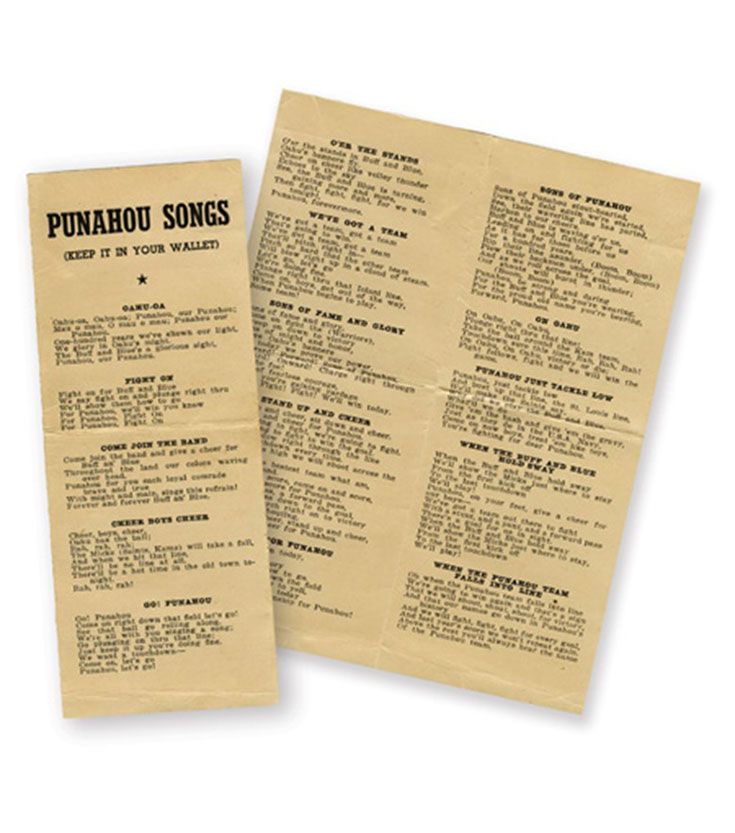 “Fight On,” “Come Join the Band,” “Cheer Boys Cheer,” “Go! Punahou,” “When the Buff and Blue Hold Sway.” Know any of these songs? How about the classic “O‘ahu a?” Well, if you were a Punahou student in the mid-20th century, chances are you knew the lyrics to these songs and many more. And if you happened to forget a line or two, you could take out your trusty “Punahou Songs and Yells” book and check. The book, which was first printed in 1924 and later edited by A.G. Greenwell (1931), had the words to myriad songs and cheers and was a compendium of pep. This 1948 pocket version belonged to Jack Brysson Greenwell Jr. ’54, whose father was a cousin of A.G. Greenwell. Along with Punahou’s graceful songleaders and charismatic cheerleaders, the songs were part of the popular pep traditions that formed around that bastion of school spirit: the football game.

Mary Bell Fox ’54 Blackstone, daughter of school president John F. Fox (1944 – 1968), remembers fondly: “Everybody went to the games. It wasn’t if you were going but with whom you were going and how you were getting there. And the spirit, you could never duplicate. It was so fierce, so important.”

On game days, Blackstone says she and her female friends would replace the leather straps of their sandals with a yellow strap on one ankle and a blue strap on the other. “We had big indents on our legs at the end of the day,” she says.

At the games, which took place at the old Honolulu Stadium in Mo‘ili‘ili (known affectionately as the “Termite Palace”), she waved pompons from the stands and snacked on “see moi” (crack seed) and “corn curls” (cheese puffs). Her favorite song was “Cheer Boys Cheer”:

Cheer, boys, cheer,
O‘ahu has the ball;
Rah, rah, rah!
The Micks (Saints, Kams) will take a fall,
And when we hit that line,
There’ll be no line at all.
There’ll be a hot time in the old town tonight,
Rah, rah, rah!
The enthusiastic crowd took its cue from the songleaders, whom Blackstone says, “everybody revered.”

The four songleaders – all girls – wore saddle oxfords and collared royal blue dresses that fell midway to the calf with pleats that twirled open when the girls spun around, exposing the yellow lining underneath – as well as some leg. The signature piece of the uniform was a thick, fragrant yellow ginger lei.

Dating back to 1916, songleaders taught and led the crowd in collective singing. Initially, participants were chosen informally. But by 1925, regular elections were held, and competition was stiff. Says Blackstone, “The popular girls were usually chosen. It didn’t matter if they were good or not when they tried out, but after the summer, they were all good.”

A 1942 “Ka Punahou” article about tryouts reported: “Sixteen ‘beauties’ have turned out for song leader… They must step lively, have a bright smile, and all around ‘zip.’”

Blackstone also remembers the cheerleading squad of her day, which was comprised of two girls and two boys elected by the student body. The girls wore similar outfits to the songleaders, but all in white. The boys wore white shirts, white pants and white shoes.

Whereas songleaders focused on songs, cheerleaders concentrated on cheers or “yells,” like the popular “Strawberry Shortcake.” Both squads enlivened the crowd with choreographed dance routines to music played by the school band.

A 1944 news clipping in the Punahou Archives describes the scene at a game against Roosevelt:

The student body really outdid themselves in fighting spirit to the point of Indian war whoops and stamping on the bleachers. Simultaneously they stood as songs of the gridiron were sung. With deep conviction and enthusiastic energy, every word resounded across the field. Never were the stands silent, and each yell and song was louder and more potent. The girls with no thought of grace or dignity let down their hair and shrieked loud praise for each and every member of the grid squad. Pompons waved indignantly as Roosevelt gained yardage; and the students were like phantom players ever pushing the Punahou spirit onward.
In 1979, the two groups merged into a Pep Team called the Song and Cheerleaders, which was selected by a panel of judges rather than by popular vote, a policy instigated by Academy Principal Winston Healy. As reported in “Ka Punahou,” Healy explained the new process would resemble one more fitting of a sports team and would eliminate popularity as a major factor “since the candidates will be judged on their teamwork, commitment to cheerleading and attitude, as well as on attractiveness and skill.”

As for the songs and yells book, the last one on file at the school archives is from 1964. But Blackstone remembers its usefulness: “It was a real boon to a lot of us. We could sing along. There was no doubting our enthusiasm.”

And it must have helped. Punahou won the Interscholastic League of Honolulu football championships her senior year – the first time in 29 years.