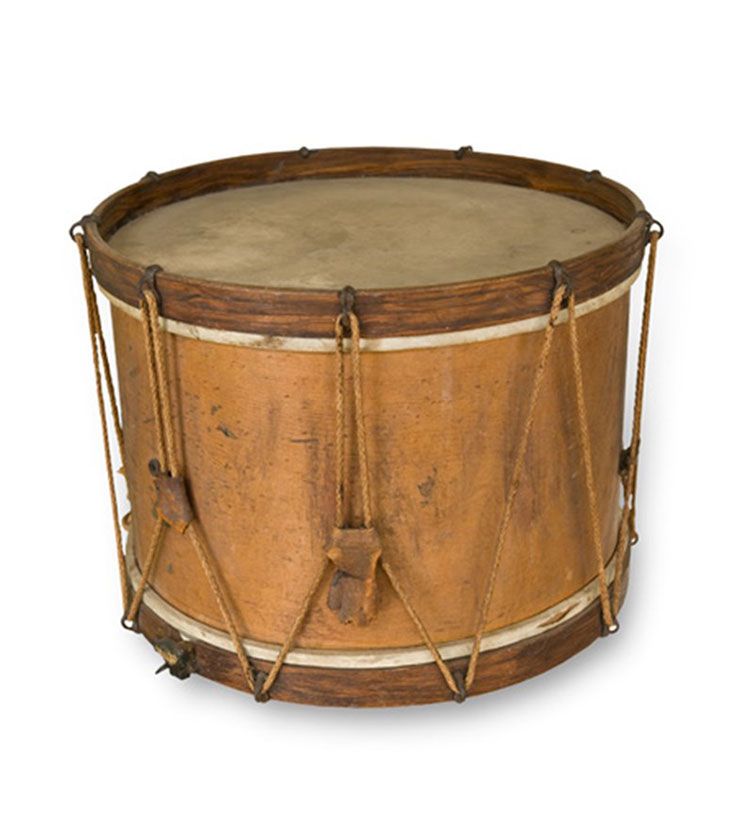 “It was a sin to lose step, you know,” recalls Rosamond Swanzy (1914) Morgan about marching at Punahou School. More than 70 years later, Morgan confessed to having “scant” memories of her time at the first Charles R. Bishop Hall at the turn of the 20th century. But in an interview conducted for the United States Bicentennial Oral Histories Project in 1976, Morgan remembered with clarity the daily marching into old Bishop Hall, where “the line was very carefully arranged so that you got into a certain place and then marched up to the assembly room upstairs to the beat of a drum.”

Laura Pratt (1921) Bowers also remembered the drum and military-style marching into Bishop Hall with some trepidation. A self-proclaimed tomboy and a late arrival to schooling at almost 9 years of age, Bowers recalled her dismay at being “at the very tail end [of the line] because I was three years older than my classmates.” 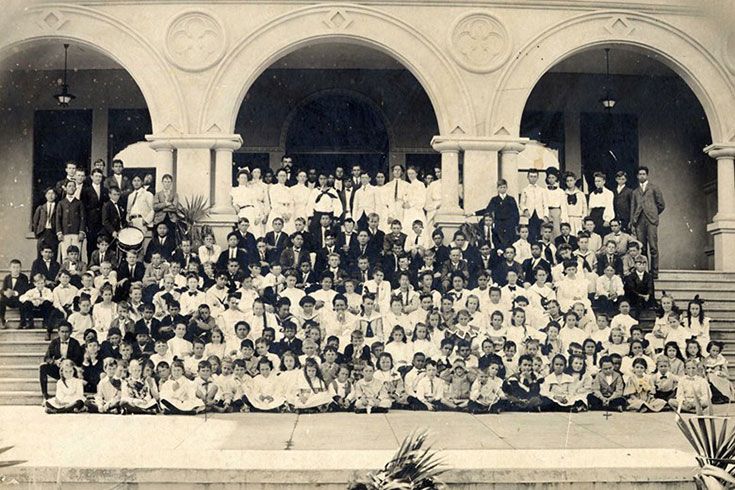 Both women remembered forming two straight lines at the sound of the 9 a.m. bell. Students, ranging from ages 5 to 19, lined up by age and height. Each pupil was responsible for keeping time to the beat of the drum and marching on to their devotional exercises where “a little business of services … prayers and announcements and so on” were held. This routine occurred without fail every morning; it was “something [they] always did and expected to do.”

From Morgan’s perspective, Punahou during the late 19th and early 20th century was characterized by rigor and a need for order. She ends her interview by stating that her “memory of Punahou teaching was rigid – just as the whole march into the building in the beginning … [was] a completely set thing.” And, indeed, this rigor is best captured in the image of a beating bass drum, always wielded by a young male scholar.

Such rigidity would seem quite foreign to a Punahou student today, with their modular scheduling, healthy extracurricular offerings, and student-driven learning. With the exception of events like Convocation and the Flaming “P,” the entire student body is rarely seen together, and yet at the turn of the last century, students were a “small family” and a scholar didn’t quite know whether one “person was a classmate of [theirs] or a class above or below.” It makes one wonder what a Punahou education meant in the late 19th century and what role a drum might have played in schooling children of that time.

In order to answer that question, we might look aboard the S.S. Wilmington, the steamer that docked at Honolulu Harbor on July 23, 1878. On board this particular vessel was Punahou’s newest president, Reverend William Ladd Jones (president from 1878 – 1883). A large man with an impressive black beard, Jones struck an imposing figure who could “at any time and for any length of time … leave the schoolroom, and there would not be a sound, not a whisper, while he was gone.” Hailing from Minot, Maine, with a degree in teaching from Bowdoin College and a graduate of Bangor Theological Seminary, Jones brought his crisp perspective about education to Punahou, which at the time was known as Oahu College.

His imposing figure aside, the reverend’s new policies would be met without opposition anyway. The semester before, the president and entire faculty resigned. The Pacific Commercial Advertiser noted this event as follows:

The [Examining] Committee feel called upon to express their regret that the president, Mr. A. Pratt, and his corps of assistants, feel themselves obliged to retire now from their responsible yet most useful position in our community; and the Committee congratulate the Trustees and the community that there has been so long maintained in this Kingdom a school of this high character, and are hopeful of its further and continued success under the new management.
Balancing Jones’ strict disciplinarian nature were his wife, Anne, the matron; his daughter, Carrie, the new drawing instructor; his three sons: Hal, William, and Myron; and a cadre of well-liked, predominantly female teachers.

Along with his entire family, Jones brought several innovations to Punahou’s early campus: most audibly, the tradition of the drum. Upon first glance, what sounds like a practice stemming from a need for military discipline and order might have had other inspirations from the family pastime. Every Jones was a musician. As Alexander and Dodge write:

Mr. Jones played the violin, Will the cornet, and Myron the church organ. They had good voices, too. Mr. Jones with his powerful bass led the singing class, a general exercise for the whole school.
In fact, Hal Jones, the reverend’s youngest son, was the School’s original drummer boy. Among the ragtag team of marchers were an assortment of Lymans, including the industrious twins, Francis (1883) and Frederick (1884); D. Howard Hitchcock, who would go on to become one of Hawai‘i’s most celebrated painters; his sister Almeda Hitchcock (1883) Moore, Hawai‘i’s first female lawyer; “O” in Life winner Mary Charlotte (1892) Alexander; and a few Loves of future bakery fame, among others.

One student wrote of how all the young scholars came together during the summer of 1879 and “each [pupil] contributed 50 cents to buy a larger drum that was better for marking time.” This bigger drum, bought with the students’ own pocket money, shows a dedication to the new ritual. The new drum, identical to a Civil War rope field drum, evoked military campaigning and discipline with its leather “ears,” wooden shell and strong metal hooks. And indeed, Jones and his young scholars might have seen their task as waging a war against disorder. This could explain the examining committee’s high praise for the “pleasure the military muster of all the scholars for roll call and entry into school rooms” during Jones’ first year. Perhaps these punctual habits were an early effort to control “Hawaiian time.”

Other innovations came later. Many Oahu College students went on to enjoy Jones’ geology class, complete with “live study field trips,” as well as a bookkeeping course that allowed students to practice making real-world ledgers. One student proudly wrote home, admitting that for his group’s imagined Punahou Sugar Company account, he had calculated by “the balance sheet that we have made a $12,000 profit,” an impressive sum when considering Punahou’s weekly $1 tuition rate at the time.

One of Jones’ final accomplishments would be opening the Punahou Preparatory School on January 15, 1883[1], at the site of the Armstrong Estate on Beretania Street (where St. Andrew’s Cathedral sits today). There, amidst a rubber tree and fern grotto, the first 50 students of Punahou’s first elementary school often heard the “sound of hula music and drumming on the other side of the high fence in Lili‘uokalani’s Washington Place.”

The year of its founding, first-year students would learn arithmetic, geography and grammar, along with penmanship, declamations, drawing, “vocal music” and other courses. It becomes apparent that music pervaded the schoolhouse when reading the local newspaper’s account of the school’s 45th anniversary ceremony. Held at the Preparatory School, the “drum corps of small boys did themselves great credit by the support they gave to the proficiency and perfectness of the[ir] drill.” One cannot help but think this the foundation of Punahou’s great drum line tradition, which can be appreciated today in the School’s nationally recognized Marching Band.

For the next few decades, the beat of the drum each morning added to the music from Washington Place, until 1902, when the Preparatory School was permanently moved to the Oahu College campus where it occupied the newly constructed Charles R. Bishop Hall. Courses evolved, and by the time the young Morgan and Bowers girls reached its hallways, first-graders enjoyed the delightful, yet somewhat vague, curriculum of “reading, memory, language and stories,” among other courses.

Before the move, however, a picture was taken of one of the last classes to attend the Beretania Street location. It was the beginning of Mary Persis Winne’s tenure (1898 – 1941) at Punahou, and she stands in the background smiling beneath a short palm. The photo appears to be a class portrait, documenting the young scholars, a small dog held on a leash, and off to the side, the drummer boy of Punahou Preparatory School, proudly displaying the school’s bass drum.

[1]This was the same year that Sun Yat Sen enrolled at Oahu College (now Punahou School). There were 32 other students. He was one of three Chinese students in the coeducational class, which included Prince Kuhio.