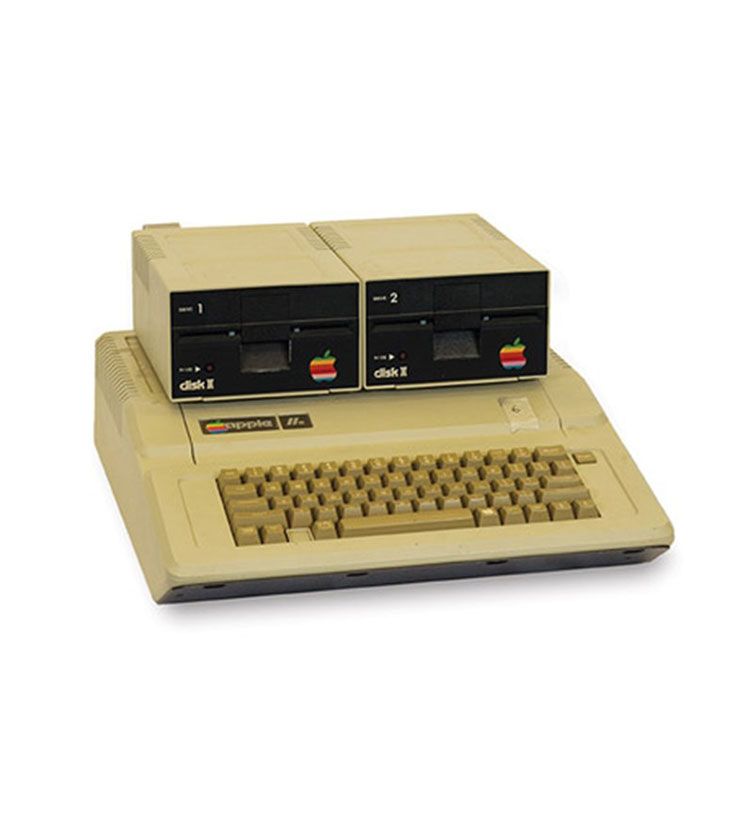 Object submitted by Wendi Kamiya
Story by Catherine Black ’94
This Apple IIe computer was one of the first widespread educational computers used at Punahou. Norm Cox, former Junior School supervisor and Educational Technology Coordinator, helped oversee their implementation and remembers the model well: “It had an extra circuit card that would give you 40 characters across the screen instead of 28 and about 150K of memory. It made a grinding sound when the diskette was put in one of the two disk drives: one drive was for the operating system, the other one was for the application.”

From the first Hewlett Packard computer, leased in the late 1960s, to the more than 6,000 devices that form part of our campus network today, Punahou’s precipitous journey into the world of computer technology mirrors that of the world at large. What was originally the object of curious experimentation in the Academy Math Department has become the backbone of a nationally recognized technology program that enables students and teachers to harness the power of the digital age in service of authentic learning and preparation for life and work beyond our walls.

Punahou’s first contact with computers dates back nearly 50 years, when in 1968 Academy math faculty Wells Lawrence took advantage of a teaching sabbatical to attend a National Science Foundation summer program on computers at the University of Oregon. Inspired by what he saw, he also took a course on the subject at Tulane University and visited the John Kennedy High School in New Orleans, which had a computer course. Shortly after returning to Punahou, he convinced the Math Department to lease a Hewlett Packard and some auxiliary equipment, making possible two early computer training classes.

But the School’s first real technological windfall came in 1981 with a $53,000 gift from former Trustee Richard Kelley ’51, which allowed the School to purchase 12 Apples. Kelley’s gift emphasized developing computer literacy at a young age, and by 1982, 26 “microcomputers” (desktop stations) were being used for computer training at Punahou, starting in grades 5 and 6. This initiative was accompanied by a series of teacher training workshops so that faculty would not be “left out.” As one veteran Academy English teacher was quoted in Ka Punahou: “This is the wave of the future. Get aboard or get swamped.”

A schoolwide computer education committee chaired by then-Instructional Services Director Sig Ramler coordinated workshops and seminars on the new technology, noting that, “With the advent of the microcomputer, there is a revolution in the application. Now, the computer touches virtually every age and subject matter, and Punahou recognizes that it has a responsibility to acquaint and introduce both its students and its faculty to an important way of learning and teaching.”

In the summer of 1982, Junior School supervisors Elaine Blitman and Barbara Jamile undertook a curriculum project for computer instruction in kindergarten through grade 4 using the Logo educational programming language, designed for elementary children. Their work was applied in classrooms the following school year.

At around the same time, Wang Laboratories in Massachusetts offered to donate a significant amount computer equipment for classrooms and offices if the School community could raise about half of its value by the end of the 1982 – 1983 academic year. The equipment would be used for various administrative purposes, from bringing the production of Punahou’s publications in-house to record-keeping for the 21,000-plus alumni, parents and friends that the School was tracking manually at that time. A call was put out to the Punahou community for donations and Wang Laboratories donated a VS90 central processor that would make possible an integrated “Wangnet” system throughout campus. Additional workstations were assigned to producing Ka Punahou, the Punahou Bulletin, the Development and Alumni Offices, and Junior School and Academy administrative offices.

The School’s first computer training space, the Richard and Linda Kelley Computer Center, opened in 1984 in Bishop Hall. That year, Punahou served as a demonstration school for Japanese educators developing computer software for Japanese schools. The group of visitors from Japan came to observe the Logo programming project initiated by Blitman and Jamile, and presented Punahou with a bilingual Hitachi computer, which was put to use by middle school Japanese language classes.

Cox says that Castle was the first building to connect all of its classrooms on an Ethernet network, around 1990. “At the time,” he remembers, students were still taking the morning roll call to the administrative office on foot. “I said, ‘why not send it through the network?’”

Cox also remembers how the appearance of a thrilling new global network known as the internet prompted the School to develop a “cockroach system” that tapped into the school’s telephone switchboard as an early way to experiment with connectivity. “We knew this would be important for education,” he says. At the time, Punahou was working with other members of the Hawai‘i Association of Independent Schools to investigate Internet connectivity on campuses around the state. Because Punahou didn’t yet have a wired computer network in place, a temporary solution was devised by tapping into the School’s phone lines. This early network connected the Cooke Library Computer Center, MacNeil 204 science lab, Castle Hall, the Wo telecommunications room, Luke Lecture Hall and some computers in Sullivan Administration Building through a slow, shared modem link via the University of Hawai‘i.

“The first person I ever emailed off campus was Jim Scott, when he was in Oregon,” remembers Cox. Junior School kids also had the opportunity to email questions to incoming president Jim Scott before he arrived, thanks to this “cockroach system.”

Cox says that when Scott did arrive, “he was blown away by the fact that we didn’t have a network and became a big driver for that.” Thanks to another series of generous gift from the Kelley family, the School was able to invest in the hardware and infrastructure needed to effectively prepare it for the 21st century by developing a functioning internal computer network and investing in the professional development of its faculty and staff in instructional technology.

A Technology Steering Committee developed a set of specific proposals, such as training Technology Resource Teachers, research and development, and curricular innovation based on technology. The Roy and Estelle Kelley Educational Technology Center was also created in Cooke Library.

1997 was a big year for technology at Punahou. The current fiber-optic network was installed across campus, allowing for quick access to the rapidly expanding World Wide Web, and the Punahou.edu website was also established. A set of Toshiba laptops were purchased, to be shared on a rotating basis between Academy and Junior School classrooms, raising the total number of computers on campus to more than 700.

As more buildings were connected to the Internet, faculty and administrators began communicating with parents and exploring guidelines for acceptable uses of this vast new resource. Several pilot projects were initiated to test its applications in the classroom, including research partnerships with off-island schools, virtual field trips, and even consulting experts like Nobel Prize winner Dr. Arno Penzias via email for a seventh-grade problem-solving project.

Always attentive to the value of technology as an opportunity for authentic and creative learning, the School administration encouraged faculty to explore uses that would expand student thinking and provide relevant, real-world experience. Academy “websters” created and maintained the early Punahou.edu website, under the guidance of Cox. These students also maintained the School’s ePunahou “intranet,” providing the campus with access to system support, email, monthly calendars and class syllabi. A community service-oriented design team called Netforce was created by then-Curriculum Technology Specialist Aaron Dengler to provide computer tutoring and support for students and teachers.

In 2000, Cox, now the School’s Educational Technology Coordinator, reported that “Many Punahou alumni are regular visitors to Punahou’s website. Almost 4,000 have listed their email address so that their Punahou classmates and friends who may have lost touch can look them up and make contact once again. Over 1,000 alumni are subscribers to the email list which is occasionally a source of information, questions and conversation for and by alumni.”

That year, the Punahou Library web portal was launched, with links to online research, curriculum resources and the library system’s entire catalog for the Junior School and Academy.

At the same time, the School administration decided to test a one-to-one laptop program in Heather Roxburgh ’63 Byrne’s fourth-grade classroom. A new fleet of colorful Mac iBook clamshells allowed Byrne to incorporate wireless portable technology into any facet of her teaching day, rather than depend on the rotating Toshiba laptop schedule. It also allowed students to take their computers home.

Thanks to another generous gift from Ron Higgins pledged over $3 million to upgrade Punahou’s computer capabilities, the one-to-one laptop program was implemented in the 2001 – 2002 academic year for every fourth grade student, accompanying them all the way through graduation. Byrne left her classroom to help the rest of her grade-level colleagues integrate the one-to-one laptop program into their curricula.

In 2006, universal wireless access was made available on campus and in 2008 Punahou was named a 2008–2009 Apple Distinguished School, a designation that recognizes U.S. schools that are using Apple technology to implement a 21st-century learning environment. Punahou School was among 33 schools nationwide – and the first from Hawai‘i – to receive the award that year. It has retained that title every year since then.

In 2010, iPads were introduced in the classroom and by 2014, there were over 6,000 computers on campus, the vast majority of them Mac laptops. Technology has been widely and diversely implemented across all grade levels and subjects, with three Technology Resource Teachers assigned to the Junior School and six Curriculum Resource Teachers in the Academy, assisting faculty expand their technological toolkits. In addition to desktop and laptop computers, hardware include Promethean and SMART boards, 3-D printers, iPads and a dizzying array of applications. Students today develop collaborative projects with peers around the world; connect to the Hokule‘a via Google Hangout; create their own movies, music, podcasts and digital art; design and manufacture 3-D objects; program robots; and write their own computer programs. Considering that just over three decades ago the School was curiously examining its first leased Hewlett Packard, it’s been a dizzying leap into the 21st century.