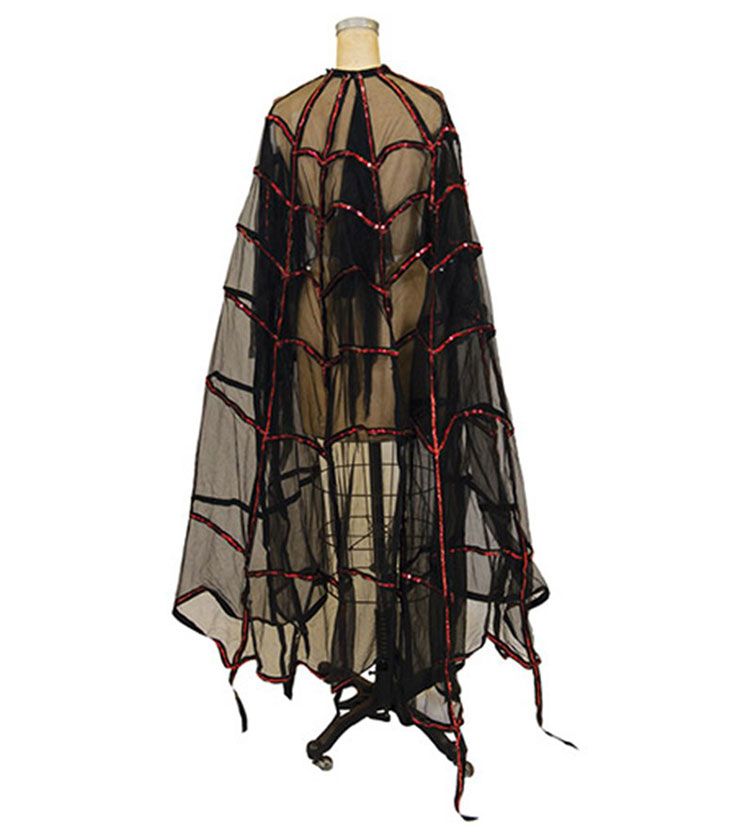 Objected submitted by Kristin Ing ’90 Aune
Text by Punahou Communications staff, Suzanne Sato ’67 and Sheryl Dare ’66
﻿
This handmade cape was created for the 1986 Punahou Dance School Triennial production of “The Sleeping Beauty.” The cape was sewn by Nancy Mednick in the Punahou Costume Shop, and was worn by Tammy Maeda ’89 Freedman as the fairy godmother Maleficent.

The Triennial production has been a long-standing tradition of Punahou Dance School since the mid-1950s, and today involves over 500 students (wearing over 750 costumes). In Spring 2016, 30 years after the original Punahou production of “The Sleeping Beauty” and forming part of the School’s 175th anniversary year celebrations, the Dance School presents a reimagining of this classic fairy.

“This cape represents the hard work and artistry that has gone into the performing arts at Punahou, as well as the legacy that we carry on today,” notes Kristin Ing ’90 Aune, daughter of Dance School Director Charlys Mirikitani ’63 Ing.

More and more courses in the performing arts have joined Punahou’s curricular and co-curricular education, with 28 Academy music and theatre credit courses in the 2015 – 2016 academic year, and state-of-the-art facilities for the Junior School’s integrated arts curriculum. While dance courses are not offered for credit, they are an central part of the co-curricular life of the School, with hundreds of Punahou students taking after-school and summer classes each year and Dance School faculty often contributing their knowledge to help choreograph School musical theatre productions.

Dance made a relatively late entrance in Punahou’s performing arts, compared to music and theatre, no doubt because of the social and cultural attitudes that reigned in the School’s early years. One day in 1864, Mrs. Cyrus Mills, matron of the Punahou boarding department and wife of the school president, discovered several young female students dancing in their rooms. She reported the transgression to her husband, who scolded the girls for violating the school’s prohibition on dancing. By the turn of the century, however, attitudes had changed and younger children were encouraged to participate in group dancing as a way to encourage healthy bodies and minds. Photos from a 1907 May Day program depict a number of students performing as minstrels, flower girls, milkmaids, storybook characters and young “Spanish dancers.”

Several notable teachers have defined dance instruction at Punahou in the century since then. In 1924, Mrs. Helen Campbell, newly-hired director of physical education for girls, established the Punahou Girls Athletic Association (PGAA) which offered opportunities for athletics and dance. According to the book “Punahou 1841 – 1941,” she influenced “a long period of development which made the girls’ physical education program one of the best features of Punahou life.”

Campbell, who was also trained in choral work, mounted a 1926 production of “Dream of India” that offered a memorable display of student talents. With a cast of 90 girls, “Dream of India” launched a tradition of spring dance recitals at Punahou that continue today. One student inspired by the Isadora Duncan-influenced dance training she received in P.E. classes was Jean Erdman ’33 Campbell, who went on to study with Martha Graham and became a seminal figure in American modern dance. 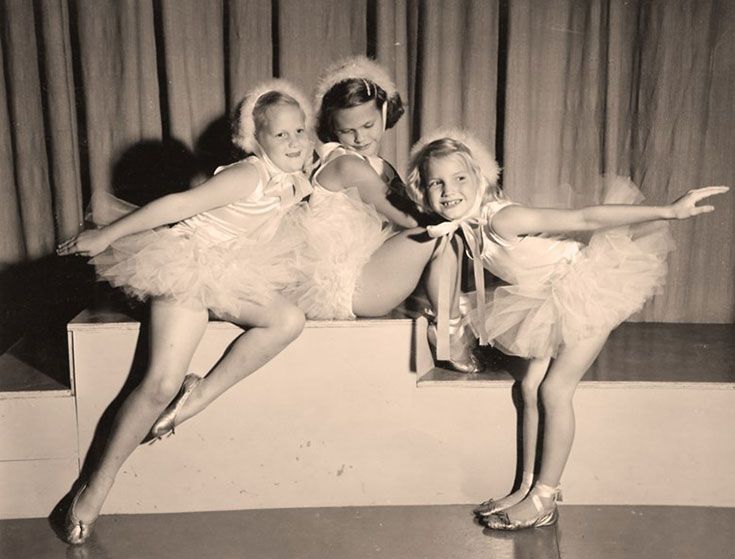 Mrs. Josephine Flanders first came to Punahou in 1950 to choreograph the “Nutcracker Suite.” In 1952, she established the Punahou Dance School even before the University of Hawai‘i launched its dance department. For 36 years, the indefatigable Flanders ran the school, taught ballet classes, choreographed 25 Variety Shows (introducing generations of teenage boys to stage dance) and whipped up triennial dance extravaganzas at Dillingham Hall. Flanders’ influence also extended beyond Punahou, defining stage dance for Waikiki and community theatre venues and launching the careers of countless popular entertainers.

Perhaps nowhere else on campus has the sheer force of one personality so dominated a discipline. Flanders originally taught dance in a classroom with desks pushed to the side. Beginning with an initial enrollment of about 50, the Dance School quickly expanded to hundreds of students eager to learn tap dancing, hula, acrobatics, musical comedy, or jazz dance under Mrs. Flanders. Recognizing her 25 years of service, then Punahou President Rod McPhee commented, “The name of Jo Flanders is synonymous with dancing in Honolulu.”

Hawaiian dance has long been central to the cultural life of Punahou. As early as 1931, traditional May Day activities included a Lei Day portion and a Holoku Pageant, initially staged near the Lily Pond. The Eldredge family has had a profound influence on Hawaiian dance at the school. In 1965, Dave Eldredge ’49, a middle school science teacher, redirected the focus of the annual Holoku Pageant toward an authentic portrayal of Hawaiian music and dance. Today, hundreds of students K – 12 perform in three May Day programs and the Academy Holoku Pageant. Under the direction of Hattie Eldredge ’66 Phillips and, today, her daughters Leilehua Phillips ’95 Utu and Lauli‘a Phillips ’99 Ah-Wong, the performances showcase the Hawaiian cultural experience for students and audiences alike.

Students have also actively promoted the development of dance activities at Punahou. In 1968, Bonnie Oda ’69 Homsey and Lesley Ronson ’69 initiated the Punahou Dance Theatre as a creative outlet for performance and choreography. Al Harrington ’54 served as the initial club advisor. The extracurricular, student-led group thrived for two decades before ending in the early ’90s. In 2004, the Dance Team was established to perform at Punahou basketball games and other school events. This vigorous, athletic team allows Academy students to experiment with more popular dance forms and to choreograph original work.

Ms. Marian Jay began working with the Dance Theater and Variety Shows in 1979 and became director of the Dance School in 1982. An early advocate for curricular recognition of dance’s educational value, Jay was described by Punahou President Rod McPhee as “an energetic and creative performer, choreographer and teacher, an integral part of Variety Shows, recitals, Dance Theater and musicals.” By 1990, the Dance School boasted a 7-member faculty and an enrollment that topped 500. Students could choose among classes that ranged from traditional ballet to tap dancing, hula, acrobatics, musical comedy, modern and jazz.

Charlys Mirikitani ’63 Ing began as a ballet instructor in the Dance School in 1978 and was appointed director of the Dance Program in 1990, the first Punahou graduate to hold that position. The current seven-member faculty, including several teachers trained at Punahou, offers a schedule that includes street dance and multiple levels of ballet, tap, jazz and musical theatre. The After School program is based on a three-year cycle. During the first year, classes focus on dance technique. The second year includes learning choreography designed to showcase each class level, ending in an informal concert on stage with simple costumes. In the third year, students participate in a “triennial” recital, with an original story, elaborate costumes, and professionally designed sets and lighting. Since it was introduced 30 years ago, the Dance Triennial is a fully produced and scripted dance extravaganza that features up to 500 students. Dance faculty also choreograph Academy musicals and the annual senior Variety Show.

In 2008, the new, three-studio Josephine Flanders Dance Pavilion was opened to better support the dance program at Punahou, building on the success of the Connors Dance Pavilion that had existed since 1963 on Piper’s Pali.

Over the years, tens of thousands of students have studied dance at Punahou. Whether they pursue a career in dance or become engaged audience members, the experience of dance can have a lifelong impact. “In the process of doing this impossible task of learning to dance, students learn something about themselves, about self-esteem, structure, and discipline. It changes their ability to handle new information in school studies, as well as to plan their free time. When you work in the arts in a disciplined manner, it changes your approach to life,” says Ing.
Back