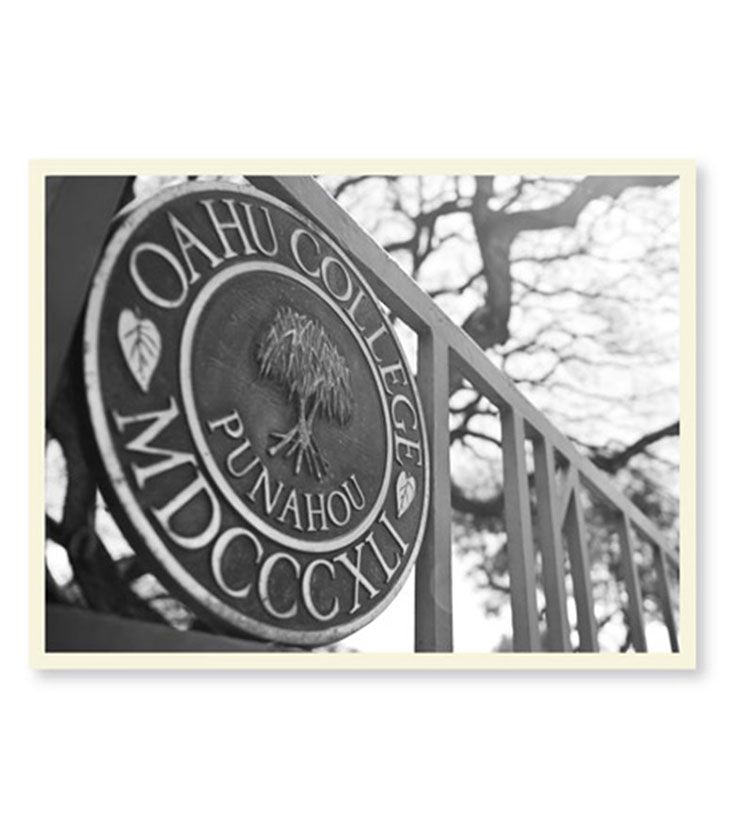 Few among the thousands of people who pass through Punahou’s impressive gates each day know that their design and construction was by students, in an effort to upgrade what had been a “cow path through a stone wall.” The gates were the gift of the classes of 1931 and 1932 and made possible by the skill and resources of the James B. Castle School of Manual Arts. Mechanical drawing students, including Elinor Howe (1932) contributed to their design, which metal shop students under the supervision of John Hind (1932) wrought into reality. The names of all the students who worked on the project are inscribed on the back of the bronze seal. Bishop estate provided the lichen-covered rock for the pillars. Interestingly, the gates bear the seals of both Oahu College and Punahou School, given that their dedication in 1934 coincided with the decision to return to the School’s original name.

As early as the School’s 50th anniversary in 1891, Samuel C. Armstrong noted that, “The training of the hand has been the neglected factor in our civilization.” Although a shop had been opened in a small cottage in 1918, it was the death of James. B. Castle (1873) that same year that generated renewed energy around the idea of a school for manual arts. Castle had dreamed of creating an institution where children could be trained in agriculture and the mechanical arts and funds from his will made possible the opening, in 1921, of Punahou’s J.B. Castle School of Manual Arts. Until 1944, it operated semi-autonomously from the rest of the School, “to teach the dignity and fascination of labor.” And teach it did, thanks in large measure to John Mahoney, an instructor from California who taught machine shop, mechanical drawing and agricultural courses at Punahou’s 90-acre short-lived farm school campus in Kaimuki.

Located behind today’s Cooke Hall, the manual arts shop produced an impressive list of student-led projects that improved the campus in a lasting way: the original Alexander Field bleachers; furniture and a solar water heater (the largest in the world at that time) for Wilcox Hall; Dillingham Hall’s stage switchboard (the most advanced in the territory at the time of its construction) and its 45-by-62-foot cyclorama; a 30-car garage; a campus telephone system; an entire kayak fleet that was subsequently entered in a regatta; the first hydroplane ever constructed in the Islands, and a glider aircraft. The glider made a 35-minute flight from a Marine base air station and won the first glider pilot’s license issued in the Territory of Hawai‘i, signed by Orville Wright himself.

During WWII, the shop possessed the only available source of industrial machinery needed to produce certain materials and became central to Hawai‘i’s war efforts. Inventive projects produced during that time included a washing machine designed to run by attachment to a jeep; a sterilization kit for the cleaning of tools; and the Magnetic Broom – a powerful electro-magnet that removed scrap steel and iron from WWII runways throughout the Pacific theater. Alexander Field was temporarily converted into a junkyard for the storage of scrap and machine parts for war use.

When the war ended, the shop was restored to Punahou and because of plentiful surplus material made available by the Navy, it became one of the best-equipped high school shops in the Territory. When the School’s newly appointed president, John Fox, chose to emphasize a more academically (rather than vocationally) oriented school curriculum and a larger, more modern shop was constructed in the basement of Castle Hall, while the original building was modified for use by the Art Department. Plans for the new Athletic Complex required the destruction of the J.B. Castle building and the demolition was carried out in 1979.