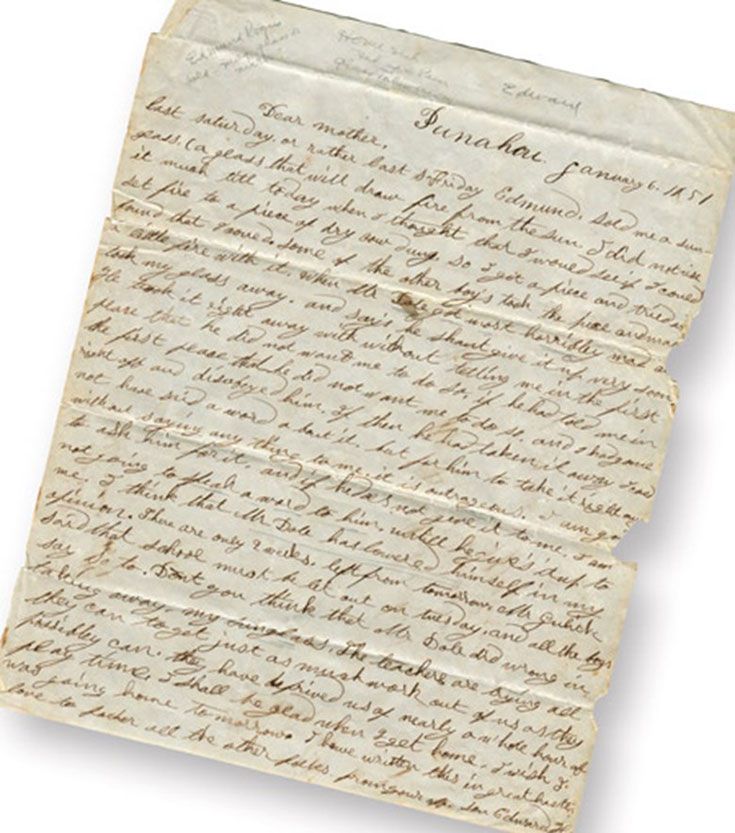 ﻿A special thanks to Dan ’63 and Ann Gladding for their generous donation of this letter to the Punahou Archives. Edward Griffin Hitchcock was Gladding’s great, great granduncle.

﻿This letter was written in 1851 by a furious 14-year-old Edward Griffin Hitchcock (1853), a member of the first group of students to attend Punahou School. The hastily penned missive was addressed to his mother, Rebecca Howard, who arrived in Hawai‘i with husband Harvey Rexford Hitchock as part of the fifth company of American missionaries in 1832. The Hitchcocks would found the first mission on the island of Moloka?i. In addition to Edward, the couple sent two other sons to Punahou: David Howard Hitchcock (1849) (father of the celebrated local painter) and H. Rexford Hitchock (1860), who published a Hawaiian language dictionary as principal of Lahainaluna School on Maui and later served in the kingdom’s House of Representatives.

Edward’s fury was caused by having his sunglass (magnifying glass) taken away by the Rev. Daniel Dole – Punahou’s first principal – who caught the boy setting fire to piles of dry cow dung. In its first decades, the School functioned as a self-supporting farm where the boarding students labored in the early morning and after classes “until it was dark enough to see two stars.” Hence, the early nickname “Punahou-hoe-hoe.” Dole’s “outrageous” act was likely motivated by the fact that the School’s earliest structures were quite humble: adobe walls and flammable thatched roofs predominated, the latter a hazard in the vicinity of burning manure piles.

Rev. Daniel Dole was central in establishing Punahou’s rigorous academic and social standards. He was loved and respected in the community for his hard work, keen intellect and progressive values; he was instrumental in opening the School to non-missionary children, for example. His wife gave birth at Punahou to her second son, but Sanford Ballard Dole’s (1864) modest entry into the world belied his future as the president of the Republic of Hawai‘i and first governor of the newly annexed territory.
Back