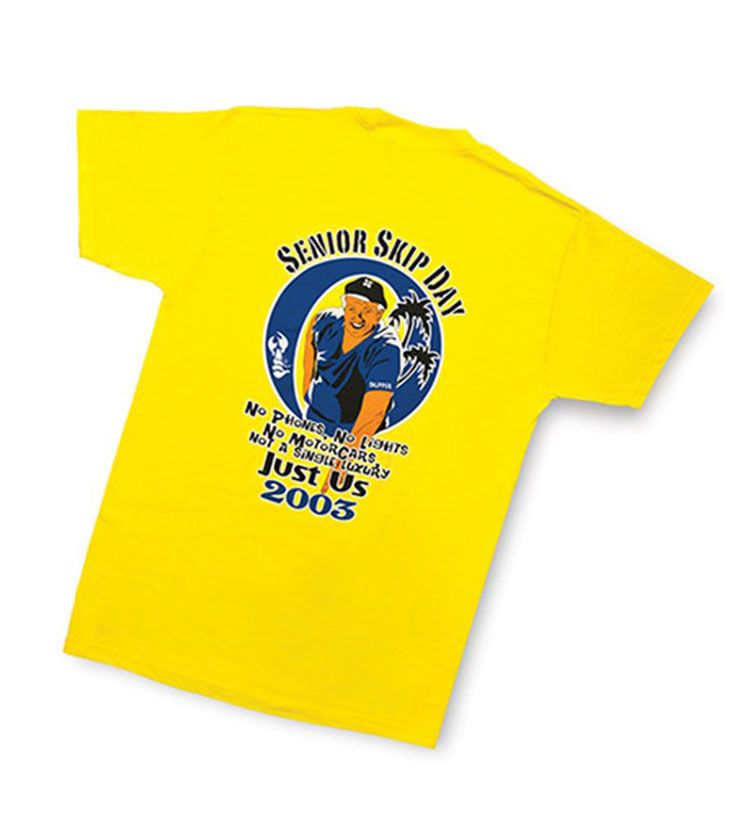 Celebrated on the year’s last scheduled class day for Punahou Academy students, Senior Skip Day is an outing where seniors can enjoy an informal get-together before finals and the formalities of baccalaureate and graduation begin. Today, the event is celebrated at “Kikila,” the White Estate, which is located in La‘ie across the street from world-class swimming opportunities at Pounders Beach.

The class of 1963 was the first to enjoy Kikila. Class dean, Tom Metcalf, remembers that the Whites initially offered their home because their son, Robert E. White III, was a class member. The hospitality experience must have been a good one because, since 1966, a Skip Day at the White Estate has been a graduation memory of every Punahou alumnus.

In his oral history, Metcalf fondly remembers his many skip days at the White Estate: from swimming to tennis, a pool and a big field for volleyball and other games, “It’s just fantastic.”

Today’s Skip Day is a highly orchestrated affair that includes chaperones, buses and catered food. It follows the tradition of class beach excursion days that have been enjoyed by generations of Punahou students of all grade levels.

But the seniors-only Skip Day picnic is a unique event – an institution that first appeared on the Punahou School calendar in 1948. Its name has roots that lie in a jolly escapade where, on November 5, 1940, 80 students decided to head for the beach rather than the rigors of academia.

The day was, as recalled by Bill Morris ’41 in his oral history, “a wonderful time. And the waves were good and the water was clean. It was just a nifty day.”

The impetus for the escapade lay in the nature of the day itself: an Election Day when every school in the territory had the day off except for Punahou. Thinking this a terrible injustice, Morris explained how the notion was sparked:

“We got the idea: The Declaration of Independence. … We the undersigned do declare it unfair and on and on and on. And a place for signatures. I drew it up in mechanical drawing class. I got a nice piece of paper. Declaration of Independence up here; we the undersigned down there and, of course, ‘Punahou.’ I think 83 people signed that thing. It was a big deal.”

On Election Day the signers declared their independence. Eighteen cars filled with boys and girls who “hauled out” to Makapu‘u (girls numbered but five or six in the group). Given the size of the contingent, it wasn’t long before the absence was noted and emissaries were dispatched to secure the students return.

Eddie Ching ’41, co-captain of the football team, was the first who attempted to convince the group to return. The response? Morris recounted that “Ching had to run for his life. We would have thrown him in the water.”

Next at bat were Mary Hodge and Student Body President Cline Mann. Mann brought a message that caught their attention: if they didn’t get back to school pronto, Punahou was going to forfeit the game with Farrington that weekend.

A quick look up and down the beach revealed that more than half the football team was counted in the group so the threat was real. An article in the Nov. 12, 1940 edition of “Ka Punahou” reads:

Then their whole attitude changed. There was a mad dash for cars and a hurried change of clothes. Some of the boys didn’t even take time to remove their bathing suits. They put their pants on over them and took off for town. On the way in to town the boys began to contemplate what school they wanted to go to next. They even went so far as to learn the alma maters of several of the other schools. The whole bunch stopped at the Blue Bird for a hurried bite of lunch and then returned to school.
The group returned to Punahou sunburned, sandy-haired, barefoot and resigned to their fates. Individuals were immediately summoned to the offices of President Shephard or Principal Slade. While the two acknowledged that the whole matter was primarily a prank, they advised the students that mob rule made the episode more serious than an ordinary cut. Meetings of the faculty and the board of trustees settled their fate as reported by “Ka Punahou”:

The eighty boys and girls are to report to Bingham Hall at 8 o’clock, Friday, November 22. The session will last until 2:30. Some of the students, by the request of the teachers, will have classes, others will have assignments, and others will study. The school cafeteria is going to be closed, so the students will have to bring their own lunches. No excuse for absence from this session will be accepted except illness, certified to by an attending physician; but if absent, the student will have to come to school the next coming holiday. Violation on the students’ part in probation during the school year will mean suspension or withdrawal from school. An unexcused cut will be considered reason for terminating their probation. The entry of probation upon the permanent records will not be made if the students’ attitude and actions during the year show that such an entry would be unjust.
Nevertheless, remembering that “wonderful day” is something that Morris and his classmates were still talking about with a smile more than 74 years later.

It was no surprise that the original Skip Day was celebrated at Makapu‘u. The completion of the Kalaniana‘ole Highway simplified vehicular beach access and those who made the trek often had the beach to themselves. And, in the years before the 1946 tidal wave took much of its white glistening sand out to sea, it was a much grander version of today’s version.

For Bill Morris and his classmates, Makapu‘u was “magical”:

No weekend was complete without a trip to Makapu‘u. The water was so alive, the ocean colors so spectacular, and the waves – some easy, for beginners, and some, “bone-yard” or “kamikazes,” for the braver, more experienced souls. No bath house then, just a bare sand dune/parking lot. Those with the most P&V (vinegar) – Bob Silverman, John Bruckner, Mickey Beggs, Jerry Peacock, Henry Saltonstall, Don Austin, Stanley Mott-Smith, Bob Value, Jack Rainalter, and Joe Woolley, among others – would arrive by Model Ts, Model As, and Model Bs, plus fancier wheels that some of the more affluent had access to. Need to change? Open doors on the ocean side of the car and change between the doors; or go “buck nekkid” to a bunch of cat calls. After swimming, wrap a towel around you, wiggle your wet trunks off, and slide your dry trousers or shorts back up under the towel. Need to go lua? If just the gang was around, go right there (being cognizant of the stiff breeze). Or go in the ocean, alert to the shout of “warm water.” Scatter! The older guys – Fred Schaefer ’38, Bill Budge ’38, John Peacock ’40, and Peter Powlison ’40 – led the way. The first fins we saw were owned by Bill, Zander Budge’s older brother. He could catch waves so much easier because of them, and so we all had to get the green Churchill fins. Peter pulled out too late one day, was sucked onto the rocks, and got some serious gashes on his head. No wonder we headed for Makapu‘u on our “Cut School on Election Day 1940” when Punahou, alone, didn’t give the students a holiday. Magic Makapu‘u! (Morris writing in the Class of 1941 Notes, “Punahou Bulletin,” Winter 2005.)