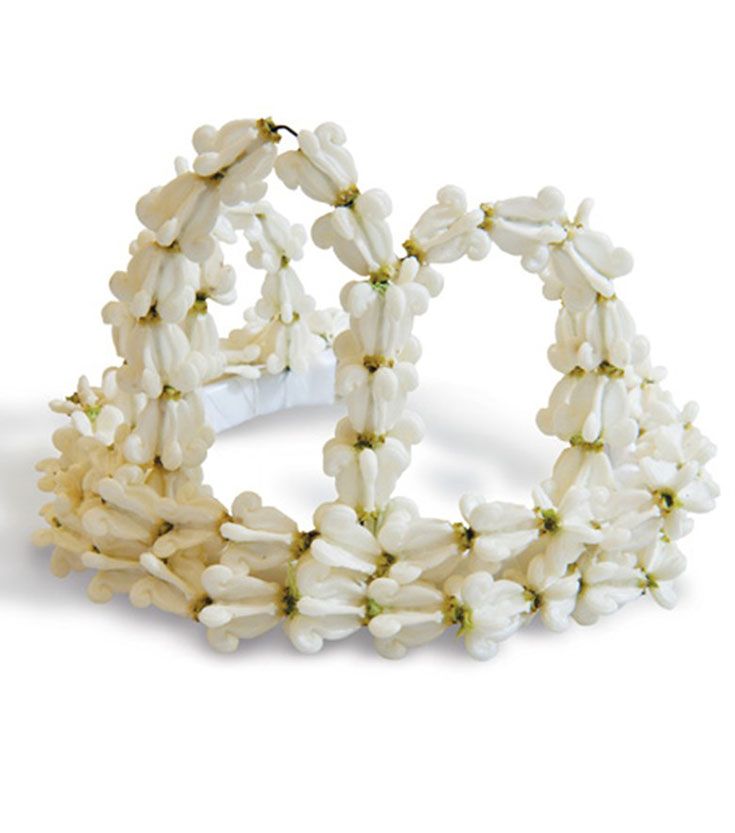 The May Day and Holoku programs are firmly rooted traditions at Punahou School, with many students from grades K – 12 participating each year.

Hawai‘i celebrated its first May Day on May 1, 1928, but May Day celebrations at Punahou date back to the early 1900s and featured English influences such as maypoles and medieval knights.

In the 1940s and 1950s, Punahou held a “Holoku Ball” at the Lily Pond. It featured a short hula performance followed by a ball. Some Hawaiian elements, such as kahili bearers and royal island princesses, were introduced, but these hula performances lacked the degree of Hawaiian culture and traditions that today’s programs contain. So how did the Holoku Pageant become what the Punahou community knows and loves today?

The authenticity of today’s Holoku and May Day programs was introduced by former social studies faculty David Eldredge ’49, who directed the first Holoku Pageant in 1965 – it was an elaborate performance with songs, music and dances that truly embodied Hawaiian culture.

“When I happened to see [the show] one year, I was extremely appalled at how very un-Hawaiian it turned out to be. It was like watching a 1930s, 1940s Hollywood-style Hawaiian South Sea type of program,” Eldredge commented in a documentary about Punahou’s Holoku tradition. “I went to see Walter Curtis and told him that if you really think that the Hawaiian pageant is something we should keep, then we should do it right.”

One of the Holoku traditions that many people look forward to is the presentation of the royal court. When the sound of the pu ‘ole ‘ole (conch shell) resonates throughout the beautifully decorated Hemmeter gym, the audience excitedly awaits the arrival of the the mo‘i wahine (royal queen) to officially begin the show.

Each year, there is a new queen to represent the role of the mo‘i wahine. The crowning of the queen pays homage to the ali‘i that once ruled the Hawaiian Islands. In keeping with Hawaiian values of respecting our past, the crowning is one way to honor the history and culture unique to Hawai‘i. The last crowned monarch of the Hawaiian Islands was Queen Lili‘uokalani, who represented her people with pride and loyalty.

The student queen works with the Holoku directors and family to fulfill her responsibilities; part of this process is the making of the crown. Typically either a wired flower crown or a basic haku lei will be used. The wired crown is tall and intricately designed with loops and peaks, and made with pikake or white crown flower. A haku lei can use any combination of white flowers.

Eldredge’s sister and longtime Punahou faculty Hattie Eldredge Phillips ’66 took over as director of the Holoku Pageant in 1997 when her brother retired, and she made many valuable contributions to the program. For example, Phillips decided that every student who auditioned for Holoku could participate in the program.

Another change was the creation of programs for different age groups (at one point, even Junior School students participated in the Holoku Pageant).

“I can clearly remember the excitement as a Winne kid, performing at night, under the lights in the gym. It was the big time!” recalled Waileia Eldredge ’94, David Eldredge’s niece, of her own Holoku Pageant performances as an elementary school student.

Eventually Eldredge and Phillips decided that the Holoku Pageant would be reserved for the Academy students and Phillips would start the Junior School May Day program. Today, Holoku and May Day consist of four programs: the Holoku Pageant for the Academy, and separate May Day performances for students in grades K – 2, 3 – 5 and Case Middle School.

Phillips, known as “Aunty Hattie” to her students, began teaching first grade at Punahou in 1970. She later served as the K – 12 director of Hawaiian resources.

Phillips’ daughters, Leilehua Phillips ’95 Utu and Lauli‘a Phillips ’98 Ah Wong, have continued the legacy of Holoku and May Day as co-directors after their mother’s passing in 2010. Since then, they have used story-based themes to teach and share Hawaiian values, myths and legends.

“Each year is very different, as we try to incorporate new elements to enhance the program,” explained Ah Wong. “For example, we use student actors to help develop the story and Hawaiian language students to help with narration.”

Because of the hard work the directors, students and volunteers put into May Day and Holoku, the Punahou community is able to enjoy these special programs. They play an important role in sustaining Hawaiian culture at Punahou, creating memories that will also one day be remembered as a part of the School’s rich history.