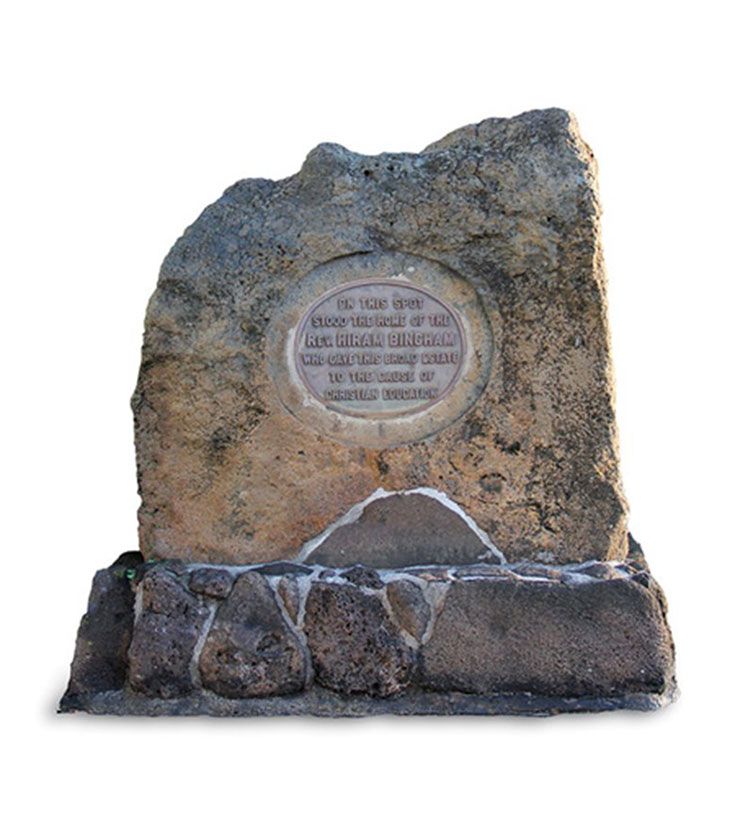 ON THIS SPOT
STOOD THE HOME OF THE
REV. HIRAM BINGHAM
WHO GAVE THIS BROAD ESTATE
TO THE CAUSE OF
CHRISTIAN EDUCATION 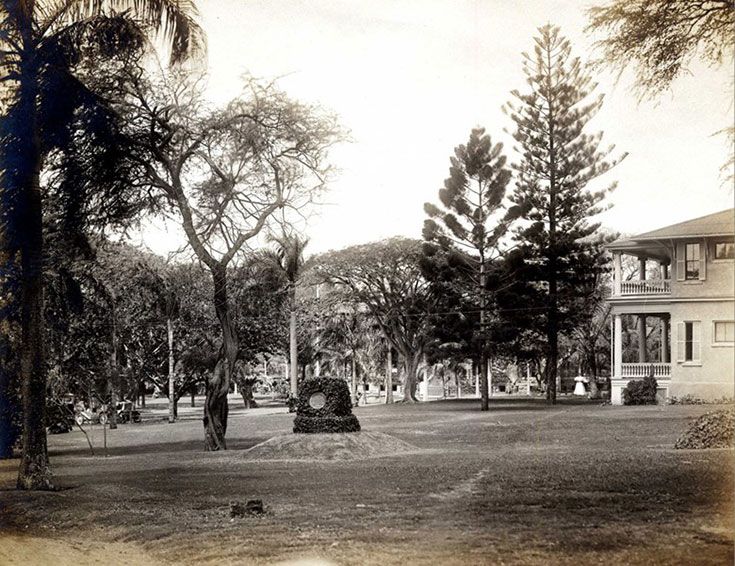 Mr. and Mrs. Bingham
Hiram Bingham (1789 – 1869) arrived in Honolulu on April 19, 1820. He was a member of the first company of missionaries to the Sandwich Islands under the aegis of the American Board of Commissioners for Foreign Missions. A prominent mission leader, he was Kawaiaha‘o Church’s first pastor, a prolific codifier of the written Hawaiian language, composer of Hawaiian hymns and royal advisor to ali‘i.

At the time of his arrival, the lands of Ka Punahou were in the care of Boki, the governor of O‘ahu, and his wife Liliha (whose grandfather, Kame‘eiamoku, received the lands as a gift from Kamehameha I). It was through the influence of Ka‘ahumanu, Kamehameha’s favorite wife and queen regent, that Bingham was granted the Punahou lands in 1829. The 224.7-acre parcel included Rocky Hill and stretched from the summit of Round Top to present day King Street. It was supplemented by fishponds, salt beds and coral flats at Kukuluaeo, a 77-acre tract that fronted Kewalo Basin.

Like other missionaries who had benefitted from the generosity of the Hawaiian ali‘i, Bingham managed the land togther with other mission members. As explained by fellow missionary Samuel Whitney on September 24, 1850, “The land could be received and immediately appropriated, as far as it was capable, to sustaining the missionary cause.”

At first, the Binghams lived in a grass home erected by Ka‘ahumanu beside a larger structure of her own. By 1831 they moved into a more permanent adobe cottage that stood beside a clump of hau trees. The building had two main rooms, a porch, a storeroom and a pantry. There was a separate cookhouse. It came to be known as the “old house” and during its final 20 years, it served as a carriage house. 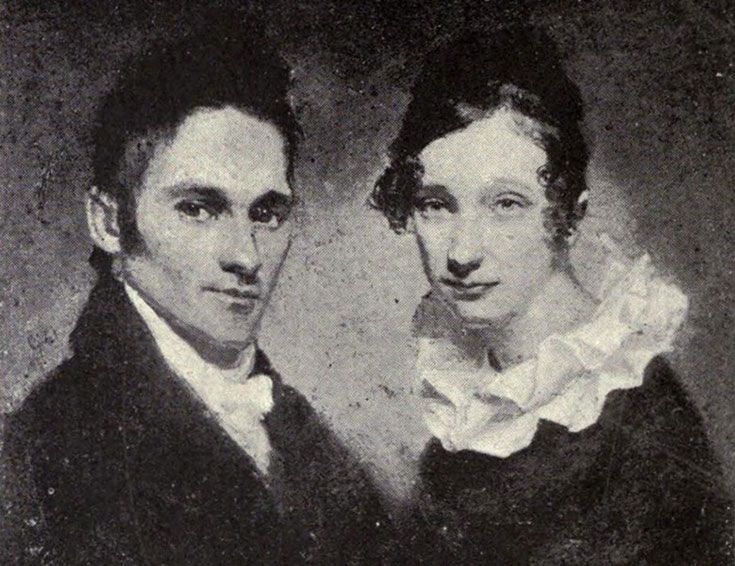 While at Punahou, the Binghams created for themselves “a quiet retreat from the noise and bustle of Honolulu.” A major accomplishment in this effort was the building of the southeast and Punahou Street walls to prevent cattle from wandering in and destroying property. Among the things they did was Sybil Bingham’s planting of the now world-famous night-blooming cereus near Punahou’s main entrance.

Because of its location on a parched plain, transforming the land was fraught with both physical and financial challenges. Writing to Laura Judd in 1845, Mrs. Bingham described her “monumental endeavor”:

The wall was brought around, the two great gates fixed in their places, the road worked through the center of the field, the nine or ten acres ploughed and stocked with cane, with no other aid from the Mission than four bibles and a few small books.
The planting of sugar cane and bananas among the taro patches transformed the land into a verdant oasis. Writing from Mt. Holyoke Female Seminary from which she graduated in 1853, Martha Chamberlain (1850) described the campus:

Climbing vines are trained on the posts of the verandahs … in some parts, and by leading them across from post to post by strings of twine, we have a natural curtain, which in the morning is covered with the beautiful blue blossoms and affords us at noon a cooling shade. Below the play ground is the little brook, and beyond that the boys’ farm. There was the corn field. Here the banana field. Yonder the beds of beets, carrots, turnips and radishes &c. And above the brook on this side is the mimosa grove. How often have we, the girls, eaten our dinners there, and played neath the cool shade and by the bubbling brook. … Back of the girls court grew a perfect little forest of pea bushes. … their over hanging branches formed a delightful shade – here many a pleasant morning has been spent in social chat and girlish frolic.
Much of the work to develop the grounds was done by mission volunteers. Sybil Bingham viewed this as appropriate, “regarding it, in anticipation at least, as the inheritance of the congregation.”

Creation of a School
Bingham’s goal for the land was for it to be a plantation for a parsonage and school. The school would be a boarding school – not for mission children, but for children of the ali‘i. Writing to the American Board of Commissioners for Foreign Missions in 1836, Bingham and others detailed their logic for this choice:

The reasons for such a school were: the great need of systematic and daily instruction for the children and youth of Honolulu and vicinity, particularly for the children of the chiefs resident here that are soon to sway the nation, and who are constantly exerting an influence which cannot fail to be prejudicial to a wide extent so long as they are permitted to pursue an unrestrained course. Honolulu being the capital of the nation it seemed peculiarly proper that a school should be established here or in its immediate neighborhood.
But constant financial difficulties delayed the fulfillment of this goal. In the meantime, Mr. and Mrs. Amos S. Cooke opened The Chiefs’ Children’s School (later known as the Royal School) in 1839. According to Benjamin Wist in his article “A Century of Public Education in Hawai‘i,” the missionaries had also opened schools for both the Hawaiian children and adults:

The missionary education system reached the peak of its development in the year 1832, when there were more than 53,000 pupils enrolled in 900 schools. In other words, approximately 40 per cent of the total Hawaiian population was in attendance in the missionary-promoted schools. By this time 85,000 individuals were able to read. It should be borne in mind that few of the pupils were children. For instance, in 1829 only one-tenth of the enrollment in the schools on Oahu came from the younger group.
By 1840 there was immense pressure that a local school be available for the mission children. Missionaries were being lost as parents returned to the U.S. continent in order to give their children an education of the same standards they themselves had received. In order to staunch this exodus, a unanimous vote was made at the General Meeting in 1840 to undertake the “experiment” of a boarding school for the mission’s children. Because extensive work had been done to prepare the grounds for a school, “it seemed proper that its location should be at Punahou, a pleasant spot of ground already in the possession of the mission.” The Bingham children would not benefit from this project. Taking the remaining three of their seven children with them, in August of that same year the Binghams left the Islands and the mission that had brought them there, never to return. 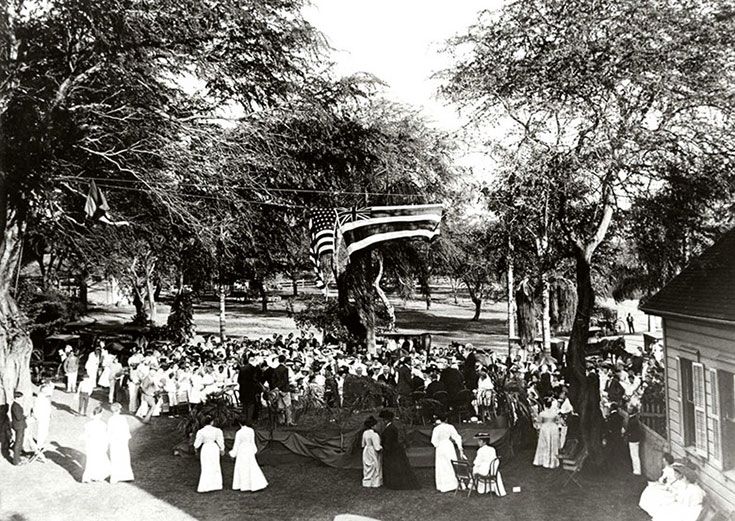 An Enduring Legacy
Although the Binghams were gone, they and their work at Punahou were not forgotten. Two campus buildings (built in 1883 and 1959) have been named for Hiram Bingham and, on April 19, 1905 – 82 years from the day the Binghams arrived in Honolulu – a stone marking the southern corner of their former adobe home site was dedicated.

This was the ceremony scene was described in the May 1905 issue of The Friend:

Above the veiled stone the college colors floated, looking very beautiful against the foliage of the royal palms and kiawe, and upon a stand behind the stone were chairs arranged for descendants of the missionaries who were to take part in the unveiling, and for the trustees of the college. In front, upon the shaded grass, chairs were placed for spectators, and these filled up rapidly. By 4 o’clock, the time set for the beginning of the ceremonies, every chair was occupied, and there was a fringe of men and women and college boys and girls behind the chairs, and still behind these a row of carriages filled with interested spectators.
Speakers that day included The Reverend O. H. Gulick (1848), Lorrin A. Thurston Esq. (1875), Judge Sanford B. Dole (1864), The Reverend Hiram Bingham II, the Honorable P. C. Jones and The Reverend S. E. Bishop. All extolled the work of Reverend Bingham and the example that he set for others to follow:

Hiram Bingham laid a foundation as solid as the grand mountains which look down upon us; a foundation which will last as long as the trade winds blow across Manoa and the surf beats on the beach at Waikiki. The generation which is still passing, has begun well the superstructure. Punahou has been, and is, the center of a radiating influence which tends to the uplifting of Hawaii and the right living of its people. (Thurston)
When Boki gave Punahou to Mr. Bingham he gave it to the right man … this gift, passed over by Mr. Bingham to the cause of education, has been a liberal endowment of the institution which has been a prominent reason of its successful growth. (Dole)
It was Bingham’s son who unveiled the monument while asking those in attendance to “call to mind the labors of love which my dear father put forth in this city for the redemption of Hawai‘i, and his parting gift, Punahou.” 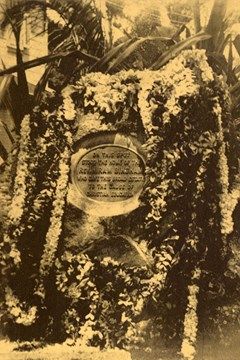 At that point he stepped to the flag-covered tablet and untied a cord holding the flags in place. A system of pulleys then raised both the American and the Hawaiian flags, together with the two flags of the Punahou colors which floated to the sides.

Immediately afterwards, the stone was dedicated by Mrs. Lydia B. Coan and Misses Mary Kluegel (1901), Claire Kelly (1900), Margaret C. Thurston (1914), Jane L. Winne (1903), Catharine W. Goodale (1905), and Helen Alexander (1903), all descendants of missionaries in the Pioneer company. Finally, the stone was garlanded with numerous lei of maile and gardenia.

“Unveiling Ceremonies In Memory of the Pioneer Missionary Rev. Hiram Bingham.” The Friend, May 1905
Back