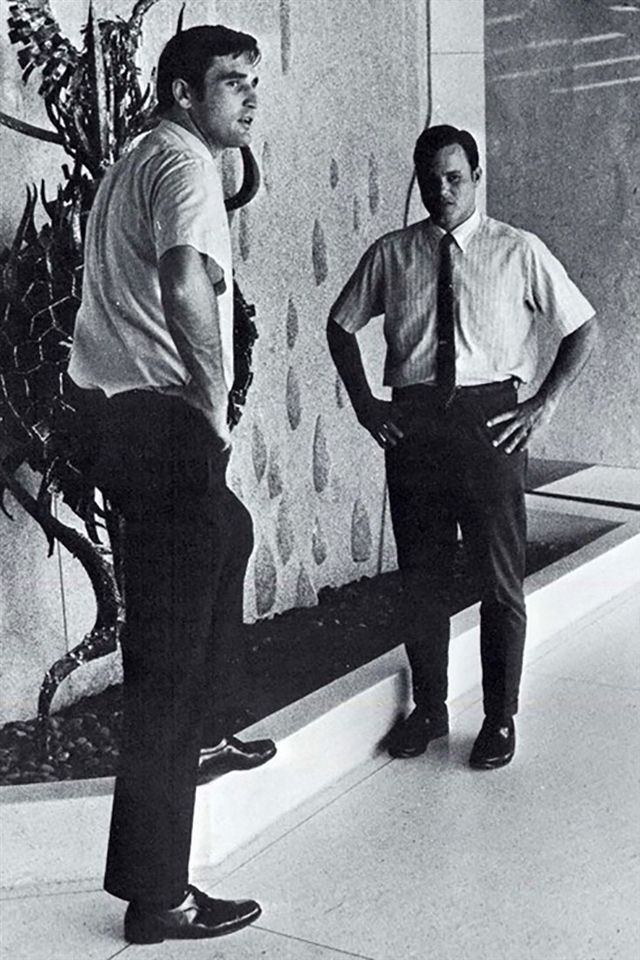 The daily schedule of a school is the heartbeat that courses through its day. For decades after Punahou’s founding, bells rang at standard intervals to announce the passage between classes, each one homogeneously timed to coincide with the next. It was a timetable that caused Healy to observe: “As goes the master schedule, so goes the school and the effectiveness of the learning program.”

With the emergence of learning theories that stressed “discovery learning,” “individualized instruction” and “team teaching” in the 1960s and 1970s, educators began to recognize that a school’s schedule limited opportunities to foster relationships between teachers and students. Former Dean of Administration Paul Wysard ’54 expressed his frustrations with the traditional schedule:

“Why should the teacher teach the same thing five times a day? When I taught American or European History in the early 1960s, you would have five classes a day. Say you would have a film that you’re going to show on the Civil War. You show the film five times. It’s not very stimulating to the teacher. The kids don’t know any different.” 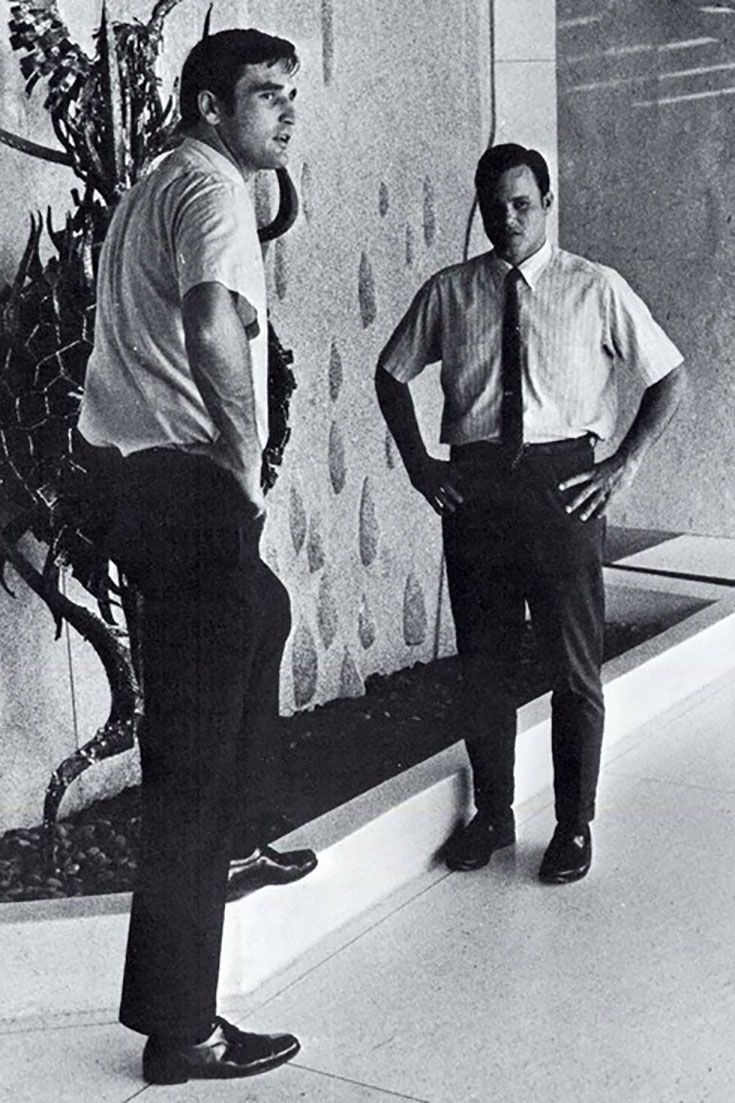 With the growth of the Academy student population to 1,600 by the mid-1960s, producing the traditional schedule was becoming geometrically more complex as facilities, course offerings and faculty numbers multiplied. It took two administrators three full weeks to produce an effective master schedule. Clearly, implementing a schedule that offered greater flexibility and matched the demands of modern pedagogy represented a serious challenge.

The Modular Experiment
The modular, variable, or flexible, schedule has its roots in the 1960s. Computer technology was becoming increasingly affordable and educators were experimenting with it to enhance school services, including schedules.

But what schedule would be followed? Since the late 1800s, school days had been organized around the Carnegie Unit: 50-minute class periods taught by teachers who specialized in single subjects. Computers could schedule time in smaller modules that aligned with the specific instructional demands of different subjects. Various schemes were spawned that used teacher teams, rotating teams, and fluid block scheduling throughout the school year. Some schools put these plans into action.

Kailua High School experimented with the modular schedule from September 1967 to May 1974 and found that, while tangible benefits like improved standardized test scores could not be measured, intangible benefits were evident. School principal Flora Takekawa noted that, “Relationships improved, students felt good about school, teachers felt good, there was more cooperation.”

Yuriko Wellington ’74 visited Kailua High School in December 1972 and thought that Punahou could “learn a lot from the ways that they employ the modular schedule.” She was impressed with Kailua’s use of resource centers and the availability of ample study space, counseling and art shops.

But these benefits came at a cost. “Modular scheduling was expensive, since it required the hiring of additional teachers. During the 1972 – 1973 school year, it cost $429,944 – all in salaries – above Kailua High’s normal budget.” In 1973 Kailua’s modular scheduling budget was cut significantly and the project ended soon afterwards.

Selling the Schedule
Several years before Wellington, Healy had also visited Kailua High School and also liked what he saw. “We decided to try it,” he said, even though the faculty were not convinced. To win support for the experiment Healy had to convince Academy teachers that scheduling, like learning, is not one act but many acts:

“Physics teachers want the economy of a single large group lecture once a week, but they also need to provide each student with almost individual guidance during a lab period. English teachers no longer lecture and even classes of 25 … frustrate their attempts to teach the skills of meaningful discussion. Math teachers seek permission to provide individual help for some students, and social studies teachers want small groups to utilize the educational value of simulations and games; the demands on our schedule are endless.”

He also had to learn how computers could facilitate the production of the schedule:

“Everything you did was with punch cards. The computer that designed the variable schedule was located in New Jersey. I used to go to the mainland for almost a month and actually construct this thing almost by hand. Every night we would run it in New Jersey and see how many conflicts we had … you’d come back with 170 conflicts and they all had to be resolved by hand. Now, as computers have gotten more sophisticated … the whole process might take a total of two weeks. It used to take 12 weeks.”

Given the number of modular options available, trial runs were necessary. The first was held in December 1969. Classes met every day for 80-minute periods. The odd number of periods in the day allowed for an extra one that was used for individual and small-group help, films, speakers, Chapel, driver’s education and sophomore health class.

A three-week follow-up trial began in March 1970, introducing additional flexibility. Days were divided into one of three schemes: 42-minute blocks, 60-minute blocks, and 80-minute blocks. Ka Punahou polled 133 students and found that 95 favored, 24 were against, and 14 had no opinion regarding the trial.

Paul Wysard considered the experiment a “sound research tool that provided good experience for other moves toward realignment of our school day.” Healy summarized his view regarding the scheduling challenge in his 1969 – 1970 Report of the Principal:

“Faced with constant demands relating to new theories of how teachers teach best and how students learn best … administrators have but a few options. We can sit tight, fail to capitalize on teacher enthusiasm and lose some of our best teachers; we can increase staff, possibly tremendously; or we can rethink our master schedule. Convinced that as goes the master schedule, so goes the school and the effectiveness of the learning program, Punahou has chosen the latter course. The experiment may be the single most important curricular innovation anticipated in this decade in the Academy.” 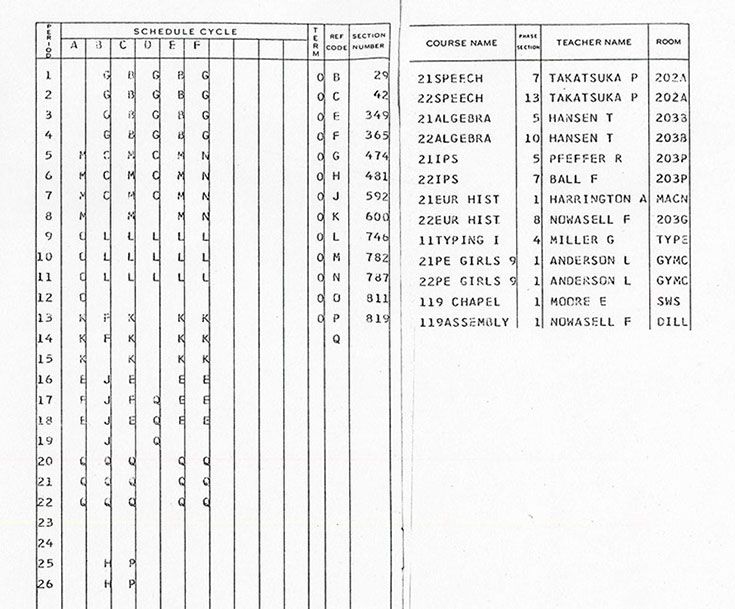 The Academy Goes Modular
It was time to fully implement the new schedule in the second semester of 1971. Ka Punahou tried to prepare the students for the change:

“Next semester the Punahou Academy will undergo a most radical change as it switches to a variable schedule. … The variable schedule will run on a six-day cycle. Days will be designated as A, B, C, D, E and F rather than Monday, Tuesday etc. Each day consists of 26 15-minute mods. A bell at 7:55 AM will herald the commencement of each new day.”

Accompanying the article was a sample schedule with the warning that “students and faculty will confront an immense intellectual challenge as they attempt to decipher their charts and schedules.”

In response to concerns about student free time, mini-courses were offered through which students could explore interests as diverse as pollution, Pacific fishing and knitting. 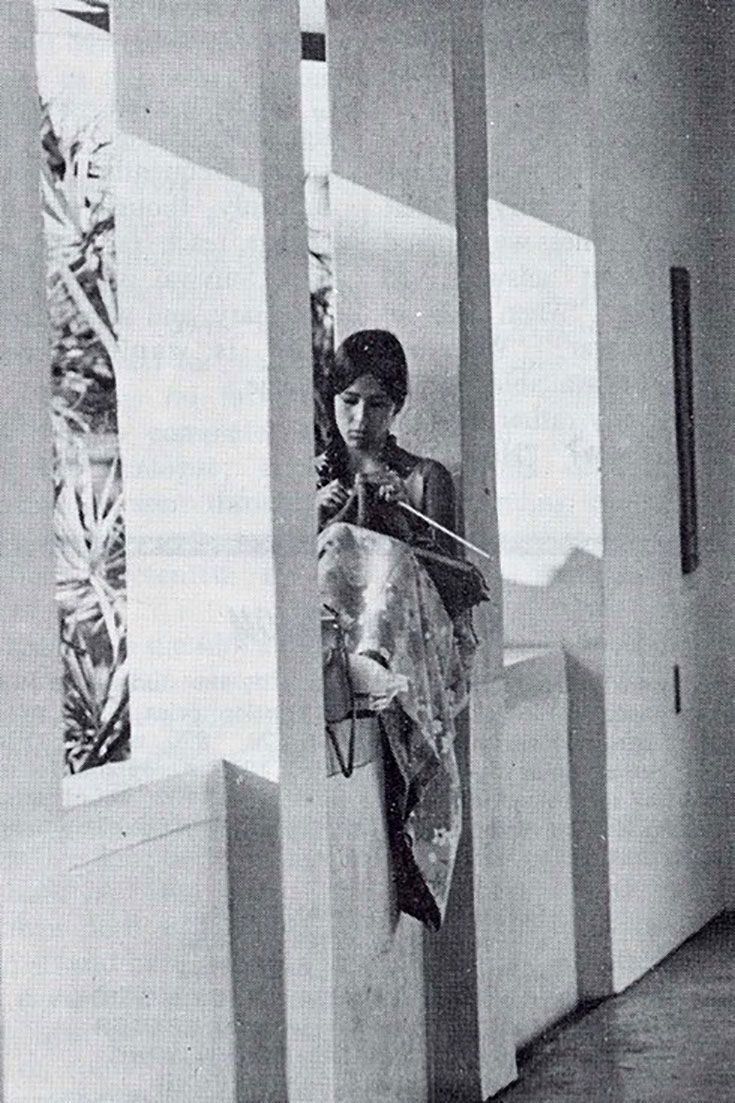 About 700 concerned parents assembled in March to hear from faculty and administrators regarding the schedule. During the meeting, Healy laid a number of rumors to rest: student violations or drug use had not increased, school costs had not increased, and while the schedule resembled what Kailua High School was using, differences between the schools made further comparisons irrelevant. Suggestions were offered for making best use of unscheduled time and parents were educated about policies for students leaving campus.

The deans noted that some students were challenged by the change. In the words of then-Sophomore Dean James Doole, “In general the better students thrived and the poorer students had even greater difficulty. Our challenge is to identify early those who are having problems adjusting and to provide the structure and the guidance which will enable them to profit from the system.”

The faculty also had to adjust to the increase in unscheduled time. With a change in a teacher’s average schedule density from 85 to 55 percent, Science Department Chair Harold Lee pointed out that this time was ideal for individual student conferences as well as preparing for laboratory experiments. Overall faculty support was at 70 percent in favor of the new schedule by year’s end. 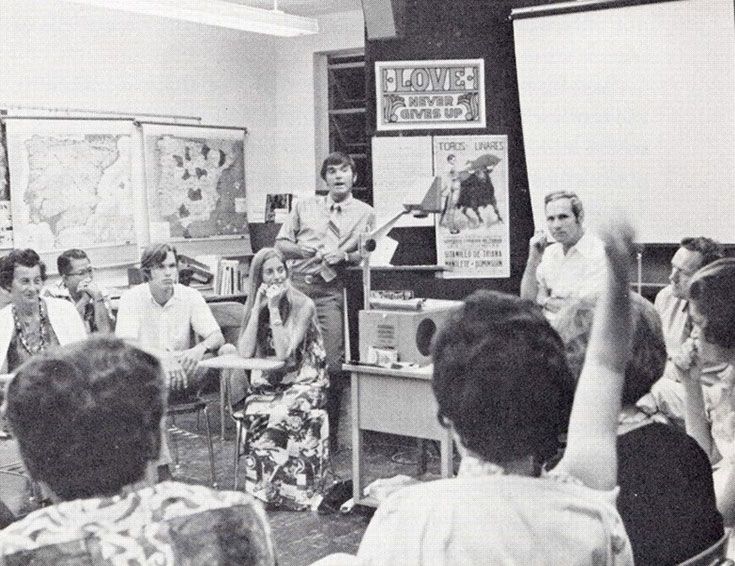 The Whole Campus Follows
The 1975 the Western Association of Schools and Colleges’ accreditation review of Punahou found that students “unanimously agreed that the greatest asset of Punahou is its modular schedule. It is felt that the freedom it offers in the way of course selection and in the usage of time is something no other school offers.” Nonetheless, while enthusiasm for the schedule was high, problems were noted with regard to “omissions and numerous overlaps.”

The major overlap was in facility usage between the Academy and Junior School. How could the swimming pool be reserved for a fifth-grade PE class every Tuesday when “Tuesday” did not appear on the Academy schedule? Chapel, personnel, assembly, gym and playing field availability posed similar coordination challenges.

The answer was to put all grades on a six-day schedule. While not a modular schedule per se, the six-day cycle would standardize the timing of daily activity campus-wide. Bishop Hall adopted the cycle day schedule in September 1976. Castle Hall followed soon after. Former sixth-grade supervisor Stanley Kay noted that, “After a hectic beginning everything fell into place with a minimum of problems. Our students particularly enjoyed the added dimensions of longer music and double PE. Since each week was a different schedule, the teachers tended not to feel in a rut as with the standard five-day week.”

In the Academy, the modular schedule also spurred a steady growth in elective courses and more flexibility in how teachers structured their classes. Its impact would eventually be felt in the design of the physical facilities, as newer buildings intentionally incorporated spaces for unscheduled time. The Mamiya Science Center, which opened in 1999, was the first of many facilities during President Jim Scott’s ’70 administration built around more flexible uses of instructional space – a direct outcome of the flexibility in teaching encouraged by the modular schedule. 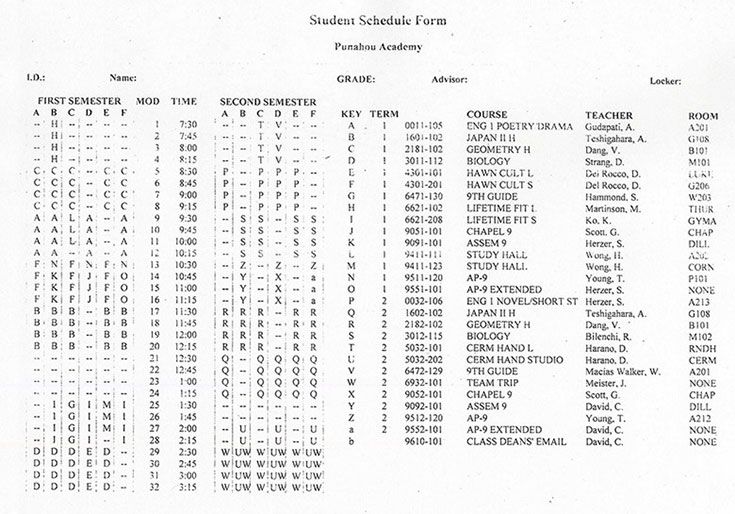