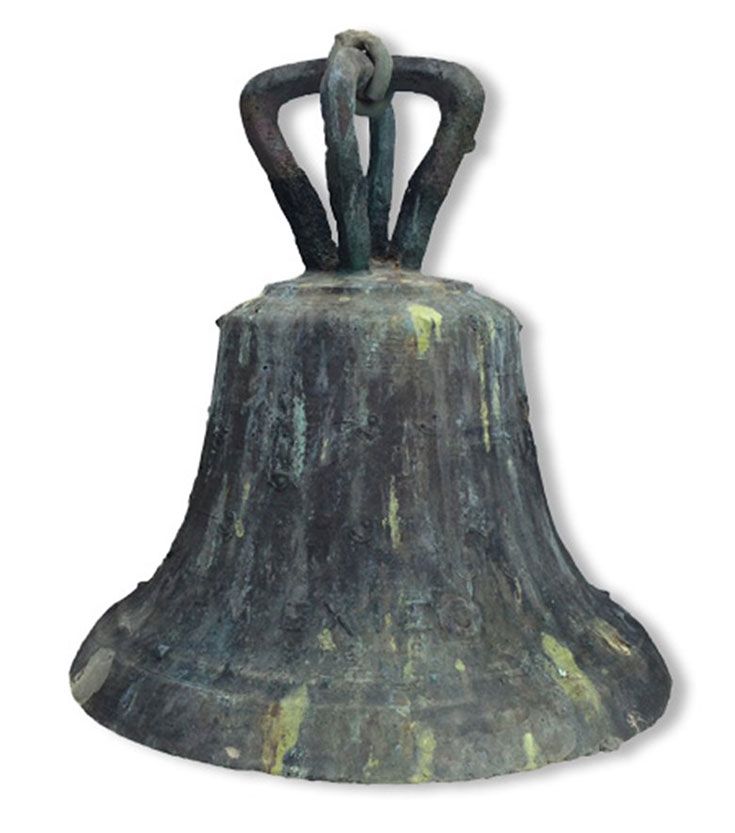 Submitted by David Shideler ’73 and written by Catherine Black ’94

The Winne Units bell has echoed through the memories of generations of Punahou Junior School students, but few know the story behind this campus icon. With its connections to Hawai‘i architect Vladimir Ossipoff and its international origin, the instrument will live on in the new neighborhood for children in grades 2 – 5 as a reminder of the Mary Persis Winne Units, where it has hung for over half-a-century.

When they were completed in 1955, the Mary Persis Winne Units ­– designed by the celebrated architect Vladimir Ossipoff – were a paragon of modernity. This is why Punahou’s 14th president, John Fox, chose to add a “nostalgic touch” by putting out a call to the community for a traditional bell. An article in the Honolulu Advertiser that year noted that:

“The redesigned façade and entry of Punahou’s third and final elementary school unit has launched one of the most intensive searches in the school’s history. The object is an old-fashioned school bell, symbol of little red school house days, which will rest on top of the lava rock wall fronting the unit.”

A first bell, donated by Punahou parent Dr. Howard Liljestrand*, originally came from a ship and was later used at a plantation. It was placed above the main entrance but considered too large and it did not “have a good tone.” While Fox was in Mexico scouting for Spanish language teachers, he discovered the current bell in a pawn shop and bought it for $75 (a close look at the bell reveals the word “Mexico” in relief). It took seven months to arrive by ship. A 1958 letter from Business Manager Charles Eberly to Dr. Liljestrand explained that: “Today we tried it out and it is superior to what we now have at Winne. It rings instead of clangs.”

Eberly went on to inquire whether Liljestrand would be interested in contributing to the total costs of installing the new instrument (approximately $200), given his interest in providing a bell for the new elementary school. Liljestrand accepted, and the original bell was returned to him. The Mexican bell was vigorously rung every morning at 8 a.m. by former Junior School Principal Vic Johnson for many years, earning him the nickname “Dr. Bell Ringer.” After the deconstruction of the Winne Units, the bell will be incorporated into the design of the new facilities for grades 2 – 5.

*An interesting footnote to this story is the famous Tantalus home designed by Ossipoff for Howard and Betty Liljestrand, which was completed in 1952. Recognized as one of the Ossipoff’s most beautiful works and an outstanding example of mid-century Hawaiian modern architecture, the Liljestrand House has been featured in numerous publications and listed on the Hawaii State and the United States National Registers of Historic Places. In 1989, Liljestrand noted that “the original bell is still here in my yard on Tantalus.”