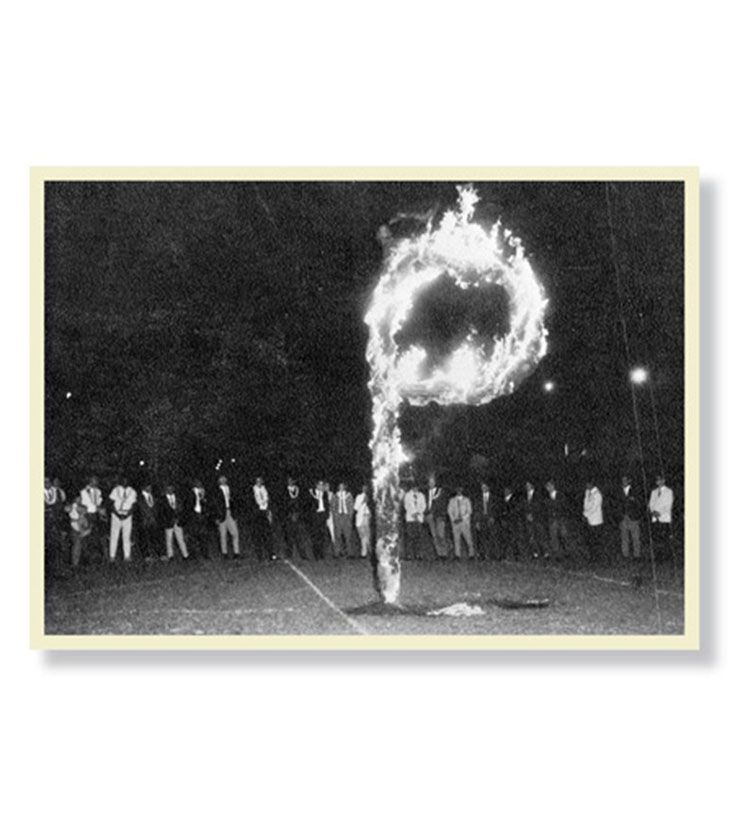 The night sky was lit up by the Flaming “P” and the cheerleaders led the band and a spirited crowd of over 2,000 students, alumni, parents and athletes in the singing of “O‘ahu a,” followed by a rousing rendition of “Strawberry Shortcake.” This is now a familiar and anticipated campus tradition, but for some of us, it was hard to believe that over 40 years had passed since the very first few Flaming “P” ceremonies.
The first Flaming “P” lit up Middle Field in the Fall of 1966. Student and Rally Committee Chairperson Dana Vivas-Tambay, Class of 1967 wanted to create an exciting pre-game event for Punahou students, faculty, staff and families.

Without any tools or knowledge and full of youthful energy and enthusiasm, Rally and Pep Club members gathered chicken wire, metal posts and newspapers from home. The students struggled for hours attempting to construct a large letter “P” when Physical Plant Administrator, Jack Stubbart magically appeared and rescued the project. He volunteered to work and finish it overnight so the students could go home and get some rest. The next morning, when students appeared on campus, the large letter “P” was set-up on Middle Field, ready to be doused with kerosene and lit on fire at that night’s Pep Rally.

In November of 1967, the Flaming “P” happened under very different circumstances, though its purpose has always been the same: to promote the Punahou School spirit. That fall, what had started out as a promising potential championship football season quickly became the worst season in memory. Midway through the season, over half of the varsity team as well as several junior varsity players were suspended for the remainder of the season for disciplinary reasons. The varsity football team finished the season with only 20 players and a dismal 2 win – 7 loss record.

The Flaming “P” that year was the result of collaboration between two members of the Class of 1968, Donna Lee Sandler Harris, the Pep Club’s special events chairperson, and Laurie Connable, Pep Club president. As the leader of the Pep Club, Laurie worked with her committee and faculty advisors Marilyn Blaisdell ’48 Ane and Bob Torrey to bolster school spirit. A student march led by Punahou President John Fox, the Punahou trustees and the marching band from campus to the old Honolulu Stadium helped improve people’s morale as the team played number two-ranked Farrington High School – its first game since the suspensions. Punahou held its own before succumbing to Farrington 28 – 14.

After the last game of that difficult season, several hundred students, family members, faculty and 20 football players gathered on Middle Field. As the “P” was set afire, each player was presented with flower lei. While no one can remember if “O‘ahu a” was sung, “Strawberry Shortcake” definitely did not close the program. What I do remember is that the evening was a sense of spirits rekindled after watching the Flaming “P” illuminate the night sky.
Back