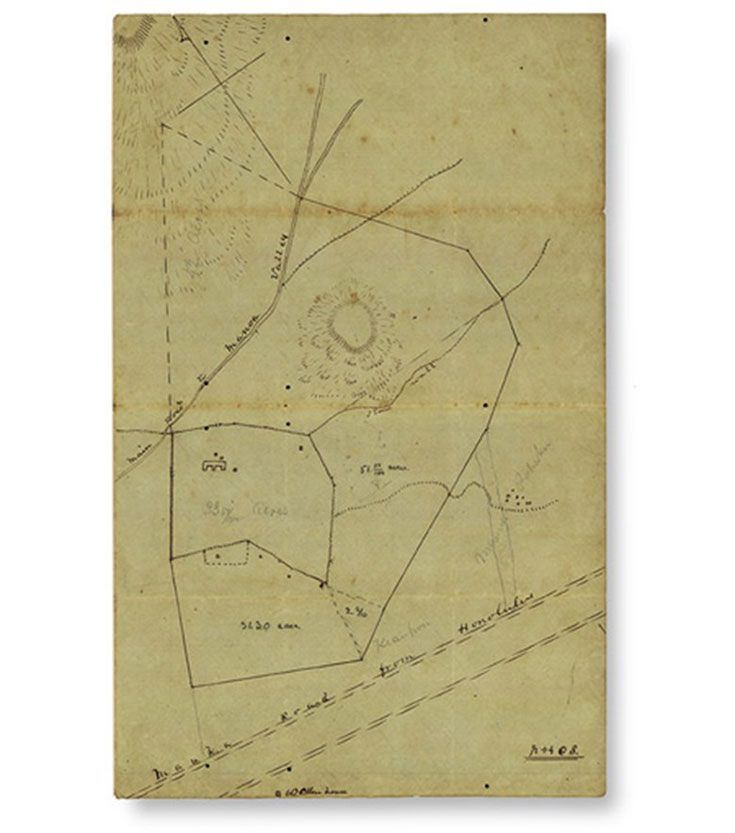 This map represents the first official survey of the lands of Ka Punahou. It was drawn for the Sandwich Island Mission during The Great Mahele – the first effort to catalog and assign ownership of land in Hawai‘i. The map formed part of one of the first legally binding documents that would support the mission’s claim to 224.65 acres of land in the area known as “Punahou,” a claim that provided the foundation – along with the educational vision and hard work of the missionaries themselves – for Punahou School.

The lands of Ka Punahou, named for the spring at the foot of Pu‘u o Manoa (Rocky Hill), were originally part of a gift from Kamehameha I to one of his favorite chiefs. Following the Battle of Nu‘uanu in 1795, Kamehameha rewarded his most loyal chiefs with land. The most valued and coveted pieces of land contained wai or water, and he gave the lands of Moanalua and Ka Punahou to his most trusted chief – Kame‘eiamoku.

Just before departing on a failed sandalwood expedition to the New Hebrides in 1829, Boki granted the lands of Ka Punahou – which included an area of salt flats and fishing grounds near the shore – to the Rev. Hiram Bingham and the Sandwich Island Mission (the local extension of the American Board of Commissioners for Foreign Missions). He may have done this despite the protests of his wife but influenced by the powerful Queen Regent Ka‘ahumanu, Kamehameha I’s favorite wife and a political rival of Liliha. The Queen Regent Ka‘ahumanu was a powerful supporter of the Binghams, and she often visited them at Ka Punahou, where she had a thatched house built for herself near the spring in 1830.

Because the concept of private property did not exist in Hawai‘i until the mid-19th century, the Binghams and the Sandwich Island Mission did not initially pursue or require legal title to the lands of Ka Punahou. Missionary families who occupied tracts of land “given” by the reigning ali‘i at the time in order to carry out their evangelical work did so with the tacit permission of the Hawaiian government.

In 1845 the Land Commission was created by Kamehameha III to investigate and award land claims, and the following year, Daniel Dole and William Harrison Rice (Punahou’s first principal and one of its earliest teachers) presented the first official claim to:

…that tract of land known as Punahou; both Mauka and makai; to be used for the purposes for which it was granted.

That portion of said land which lies Mauka of the Waikiki road is said to be bounded nearly as follows: – Commence by the bridge which crosses the street near Allens house, and running inland to near the top of Ualakaa [Round Top] – thence East into the Valley to near a certain rocky knowl pointed out by the Natives as the corner; thence toward the Sea along a line running a short distance to the East of the part of said land which is enclosed and extending to the road which runs from Honolulu to Waikiki just mauka of Allens house – thence along said Road to place of beginning.

The boundaries of that part which lies on the Sea shore we cannot define so definitely, but presume there will be no difficulty in determining them; as it is commonly known as pertaining to Punahou. This part embraces fishing grounds, coral flats and salt beds.

The above land was given by Boki to Mr. Bingham, then a member of the above named Mission; and the grant was afterwards confirmed by Kaahumanu. …
In 1848, the Great Mahele (“great land division”) occurred, which would fundamentally alter the nature of land tenure and political economy in Hawai‘i by essentially dissolving a system of land tenure based on collective stewardship under chiefly control, and making the private ownership of property possible.

To comply with the procedure for defending use of the Punahou lands, the Sandwich Island Mission submitted Claim No. 387 to the Land Commission in 1849:

… for a certain land situated in the district of two distinct pieces; one known by the name of “Punahou” proper, and the other a sea land called “Kukuluaeo” – From the evidence submitted for the Board it appears that this land was given by Governor Boki about the year 1829, to Hiram Bingham, for the use of the Sandwich island Mission and that the same, with the exception of certain portions occupied by Kauhi, Wahineino and other natives, has been in the peacable possession of the said Mission from the date of such gift up to the present times.

… We do therefore award to the American Board of Commissioners for Foreign Missions, the aforesaid land of “Punahou” proper and “Kukuluaeo”, with the exception of those portions occupied by natives; – to have and to hold to them and to their successors, during the existence of the “Sandwich Islands Mission” that is to say: – so long as the Sandwich Islands Mission shall continue to exist, and labor to promote the Christian faith they profess…
What follows in the claim is a detailed summary of the boundaries and measurements of the lands in question, based on a survey by T. Metcalf in May, 1848. The total acreage of the Punahou lands was 224.65, including Pu‘u o Manoa (Rocky Hill), the slope of Ualaka‘a (Round Top) and extending to the present Central Union Church grounds. There were an additional 77 acres in the area known as Kukuluaeo, near what is now Kewalo Basin. This was the first officially recognized map of the lands of Ka Punahou.

Witnesses to this claim included the Hawaiian educator and political figure John Papa I‘i, a certain Ka‘auwai, and Hiram Bingham himself (writing from the East Coast, after his departure from Hawai‘i in 1840). In his testimony of March 23, 1849, I‘i noted that:

I am well acquainted with Punahou and its boundaries. It consists of two parts, one inland and the other a sea land. … This land was given to Mr. Bingham for the Sandwich Island Mission by Governor Boki in 1829. It was given upon the same terms as all their other lands were given to them, and the Grant was confirmed so far as silence proved it, for in truth she had a right to set aside the grant.

From that time to this the S.I. Mission have been the only possessors and Konohikis of the land. I was a witness to the gift. The title to the mission is perfectly clear.
Ka‘auwai’s testimony from the same date included the following:

I, Kaauwai sworn – I know this land I heard Boki say to Hoapili Kane concerning the gift of this land to the S.I. Mission that he had given it to Mr. Bingham. Boki’s wife made some objection to giving it to Mr. Bingham claiming it as hers as received from her father Hoapili Kane, but Hoapili Kane confirmed the gift and it was adjudged to be right and proper. From what I heard at the time of the boundaries, I should think Mr. Metcalf’s survey correct.

I was told that Punahou extended from the Road near to Allens, back to the top of Walakaa (sic); then the Northern boundary was said to run from the top of Ualakaa Eastward into the valley so far that the Eastern line would include much of the rocky hill near the spring in passing down the road near Allens then there was a large plat on the Sea Shore embracing fish ponds and salt beds and Coral flats.”
In response to Claim No. 387, on August 30, 1853, Kamehameha III signed Royal Patent No. 1600 to the American Board of Commissioners for Foreign Missions (ABCFM) granting “in Fee Simple unto Samuel N. Castle and Amos S. Cooke, agents of the said Board all those several parcels of land which are particularly described in the surveys appended to this Patent…”

The patent covered 4,147.70 acres of lands that the ABCFM laid claim to across the Hawaiian Islands, including the more-than-300 acres of land gifted by Boki to Hiram Bingham.

There was heated internal debate within the Sandwich Island Mission about whether the “Punahou lands” should be assigned in part to missionaries from the station in Honolulu (at that time, a considerable distance across the plain from Punahou) who needed pasture for their herds. Daniel Dole, Samuel Damon and others opposed this idea, arguing that the original land grant had been intended for the school. Nevertheless, at the General Meeting of 1851 it was voted by a bare majority to give the Honolulu Station part of the land of Punahou, and the ABCFM backed this decision.

In 1855, the government, at the Board’s request, canceled Royal Patent 1600 and issued four new patents: to Samuel N. Castle and Amos S. Cooke; Maria P. Chamberlain; Ephraim W. Clark; and Elizabeth Rogers, respectively, assigning to them different portions of the lands at Punahou (Castle and Cooke acquired 36.9 acres on Round Top; Mrs. Chamberlain’s 26.66 acres adjoined the Punahou School premises on the east; and Mrs. Roger’s 27.05 acres adjoined Mrs. Chamberlain’s). The remainder was included in a new Royal Patent No. 1958 to the ABCFM, totaling approximately 134.4 acres.

While the School obtained and sold many more parcels of land in Manoa in subsequent years, this map and its accompanying narrative allows us to trace the original gift of land that laid a foundation for Punahou School to grow from humble beginnings to the world-class educational institution it is today.