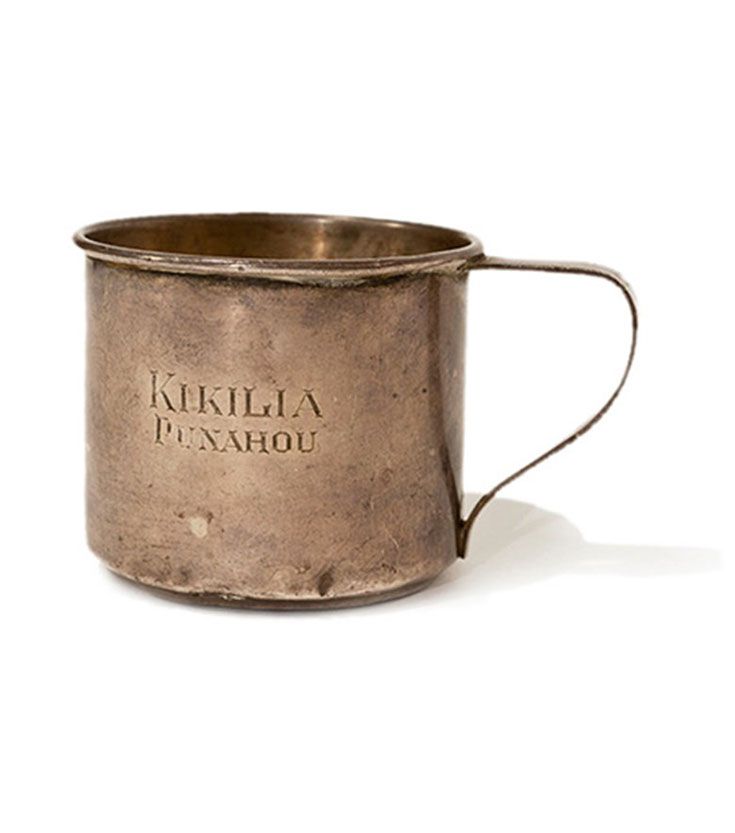 When Director of Advancement Initiatives Kikilia Fordham ’82 attended Paepae O He‘eia Kapunahou, a service and learning program for faculty and staff, she was asked to bring a treasure that represented her life to share with the group. It was a no-brainer. She brought her baby cup.

The tarnished silver cup with KIKILIA engraved in upper case and the word Punahou underneath has traveled with her for over 50 years. The daughter of Punahou teacher Henry (Hank) Fordham Jr., she received it when she was born.

Pauline Lo ’71 Bailey, director of human resources and co-curricular programs, says Punahou gives the cups to honor new babies of faculty and staff. “By engraving the cup, it distinguishes it from just some generic gift – it makes it precious (silver) and special (personalized),” she says.

Bestowing newborns with gifts of silver dates back to at least the Middle Ages and comes with wishes for good health and wealth.

At Punahou, families have been an integral part of the school community since its founding, when teachers and administrators lived on campus along with the boarding students.

Emily Dole, wife to the school’s first principal Daniel Dole, gave birth to two sons at Punahou shortly after arriving: George (1842 – 1912), who became a soldier in the Hawaiian Royal Guard and was appointed to the legislature of the Hawaiian Kingdom representing Kaua‘i, and Judge Sanford Dole (1844 – 1926), president of the short-lived Republic of Hawai‘i and first governor of the Territory of Hawai‘i.

Even long after its origins as a self-sustaining boarding school, Punahou retained its tradition of housing the president’s family in the lovely President’s Home constructed in 1907 on the slopes of Rocky Hill. But they weren’t the only family that enjoyed living on campus. From the late 1940s until the construction of Case Middle School in 2003, faculty were given the option to reside in over 20 cottages along Slade Drive and Piper’s Pali. This community was a neighborhood in its own right, and it gave rise to the “campus brats,” as the children of these teachers and administrators – including Fordham – affectionately call themselves to this day.

As a child, Fordham remembers seeing her cup sitting atop a shelf looking “shiny and pretty.” Her family pulled it down on special occasions like Christmas Eve, and it was her job to polish it up.

Around the age of six, she started taking the cup outside when she played house and pretended to make salad. It accumulated a dent or two after she banged it against the rocks.

Now the cup symbolizes for her a life deeply rooted at Punahou. In addition to being a faculty kid, alumna and employee of the school (first as director of alumni relations from 2006 – 2014 and now in her current position), she served on the Punahou Alumni Association board from 2003 – 2006 and sent three children to the school. Moreover, she grew up on campus – literally.

Her father was hired in 1961 as the band director and later started the school’s video production program. The family, which included older siblings Henry ’77, John ’80 and Helena Fordham ’81 Ishida, lived on campus, first at 62 Piper’s Pali (where Case Middle School’s Higgins Hall now stands) and then at 43 Piper’s Pali above Barwick playground near the dance pavilion.

Fordham says there were eight faculty “campus brats” in her class alone. Like her parents who were from New York, most of the campus families didn’t have relatives in the islands. So they all looked out for one another.

“This was our family,” she says. “All the faculty members became aunties and uncles to us, but we still called them Mr. and Mrs. since that’s what was appropriate at the time. But we were all hanai children.”

Fordham fondly recalls Sunday afternoons at Waterhouse pool and running around campus barefoot in her bathing suit bottom and tank top. “Having the school as our backyard was the healthiest and safest environment anyone could dream of,” she says. She and her siblings had the run of the place until their parents rang a big cowbell in their yard, signaling it was time to return home.

For him, the Winne Units were the perfect playground. “They were a maze with all their corridors and secret hiding places,” he recalls. “We played games like capture the flag and tag and learned how to get onto the roof. Later, we skateboarded through the halls until the security guards saw us and chased us out.”

Like Fordham, Martinson says his baby cup, which he has kept all these years, reminds him of his childhood growing up on campus. “It means that you’re rooted at Punahou and rooted in Punahou families.”

Martinson still gets together with the faculty kids he grew up with. And Fordham has brought her baby cup full circle: she keeps it in her office on campus.

“When I see the cup, I think of how I’ve really planted myself at Punahou,” she says. “It’s my lifeline. Everyday I think, ‘Do I need to move on? Have I had my fill?’ And I answer ‘uh-uh.’ It’s great.”