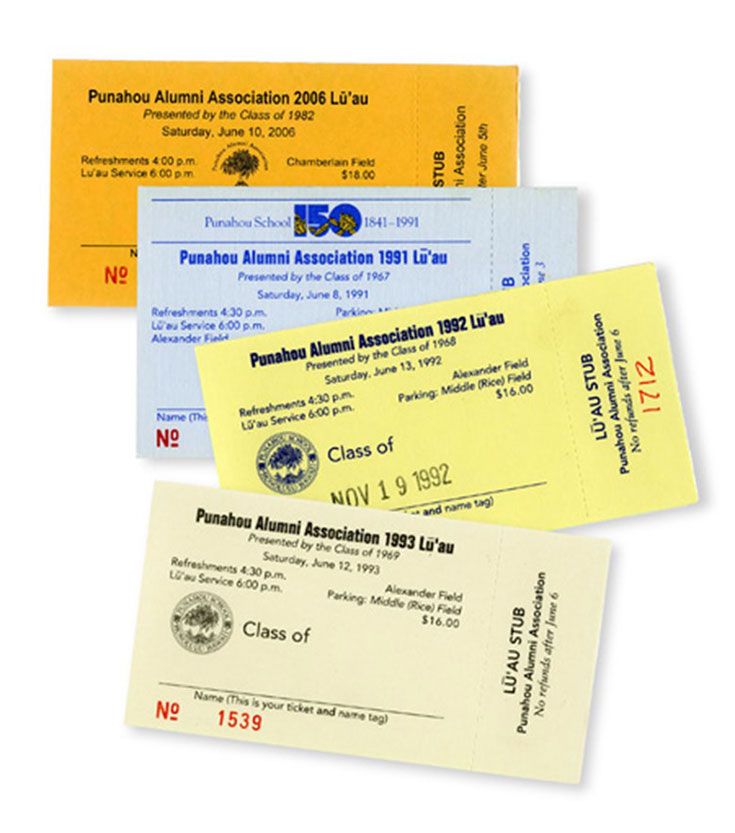 Punahou is well-known for its organized Alumni Lu‘au, which is a longstanding success because of the countless people who work together to make it unique and memorable each year. From Punahou, this includes staff from the office of Alumni Relations, Physical Plant, the Business and Advancement offices, members of the Academy and Dole Cafeteria staff. But without the thousands of alumni who return to campus to relive memories and rekindle friendships, the magic of Lu‘au would not exist.

In 1926, the Punahou Alumni Association (PAA) produced, with School support, the first organized Alumni Lu‘au. True to tradition, volunteers using old family recipes prepared all the food for the Lu‘au, many of which came from the Gay family, whose members were instrumental in producing this first event.

During Alumni Lu‘au in the 1950s, Charles “Fat” Guard ’37, brought in McCabe, Hamilton and Renny who were all stevedores to prepare the central dish of any lu‘au menu: kalua pig. After “Fat” retired, the pig was prepared off campus and brought to the cafeteria for shredding and serving. But more recently, another “Imu Gang” was formed by Scott May ’56, together with John Kamakana ’56, Michael A. “Buddy” Maguire ’58, and Punahou parents Larry Pang, Jimmy Hashimoto and Peter Holiona. In 1980, May’s 24th Reunion Class located the site of the old imu pit and once again, kalua pig was cooked on Punahou’s campus. May continues to share his mana‘o with the reunioning classes and under his guidance the Imu Gang today includes 13 members.

In 1964, PAA Board member, Mary Helen Gay ’45 Styan, proposed that the 24th Reunion Class provide the manpower for Lu‘au, beginning a new tradition. In 1982, the Class of ’63, celebrating their 24th year, designed a new imu and covered pavilion as their Class Gift to Punahou. In 2013, with the renovation of Alexander Field, the imu was expanded and moved to its current site, where the Imu Gang still oversees this essential aspect of Lu‘au to ensure safe and healthy food preparation and attention to protocol.

Preparing for their big year as “hosts” of Alumni Lu‘au, the 23rd Reunion Class now shadows the 24th Reunion Class, taking notes and learning how to create a successful event.

While the effort was a success, requests that this service not be included in the Lu‘au ticket price were noted, and in 1976, with support from the School and the PAA, the first request for a one-day liquor license was submitted. It’s interesting to note that this beer and wine service offered at the annual Alumni Lu‘au helps to keep the budget in the black.

The Alumni Lu‘au used to be held between Castle Hall and the original Dole Hall, on the Diamond Head side of campus. After the construction of the Winne Units in the 1950s, the event was moved to Alexander Field.

From 1982 – 1989, Lu‘au was held on Chamberlain Field. It was a lovely setting, but transporting the food from Dole Hall was difficult. Planning for the Sesquicentennial Celebration in 1991 presented the challenge of feeding 3,000 guests in a reasonable time frame, so with Director of Physical Plant Steve Piper’s ’68 support and guidance, Alexander Field was tested once more in 1990. Through the late 90’s and early 00’s, the Lu‘au returned to Chamberlain Field so that Alexander Field could be dedicated to athletic activities. 2009 marked the move to Rice Field and the center of campus, where the event is still held today.

Kane Fernandez ’54 was instrumental in providing the giant Lu‘au tent each year. In 1991, aware of the need to seat 3,000 guests for the School’s sesquicentennial celebration, he traveled far to find a special tent that was so large, it covered the entire football playing field! Kane gifted Punahou with the yellow and blue tent that is now used each year. His company, E.K. Fernandez, stores the poles and his men come to Punahou to assist Physical Plant each year with the setup.

Lu‘au’s program has changed over the years. The PAA had previously presented the “O” in Life Award to a surprised recipient at the end of the evening. In addition PAA honored the recipients of the PAA Senior Award, given annually since 1939, to a senior boy and girl who have distinguished themselves academically and made significant contributions to their community. These awards seemed lost amidst the noise at the end of the evening.

Since 1997, the “O” in Life has been announced prior to Lu‘au at a special luncheon at the President’s Home. In addition to honoring the newest recipient, past recipients, PAA Past Presidents, Punahou Trustees and other special guests gather for a formal presentation of this award. At Lu‘au, the PAA invites past recipients of the “O” in Life to attend the annual Lu‘au as guests, and prior to giving the award, recognizes past recipients present with lei. It is always a fine tribute to capture a photo of all these wonderful Punahou icons on the stage.

An important group of guests and those fondly known as “old-timers,” members of classes celebrating their 51st anniversary and older, are seated in a special section of the tent, together with Trustees and administrators.

During the program, the director of Alumni Relations welcomes the guests, introduces Punahou’s president, who shares some words of welcome and recognizes the Trustees and Trustees Emeritus present. The 24th Reunion Class chairs then recognize and cheer each of the reunioning classes by asking them to stand.

Entertainment traditionally featured a Hawaiian trio, which played music during the cocktail hour. In the early 1990s, with the formation of the Alumni Glee Club and their participation during the Lu‘au program, the School has begun to recognize special guests through song and dance. Their first performance during the 1994 Alumni Lu‘au was outstanding, and they honored Henrietta Smith Mann (1909), Trustee Emeritus and “O” in Life recipient, by singing her favorite songs. They then turned to renowned composer R. Alexander Anderson (1912), another past “O” in Life recipient, and sang some of his original songs. The hardest part of the Glee Club’s performance was singing songs of farewell to retiring Punahou President Roderick McPhee and his wife Sharon. A highlight was Sharon joining the group on stage in a hula that she’d been taught secretly by Hattie Eldredge ’66 Phillips to surprise her husband. Another surprise was a solo sung by the incoming President, Jim Scott ’70.

The first director of the Alumni Glee Club, Donald Yap ’49, was also the Director of Punahou’s Music School, and decided to arrange a Hawaiian song from the 25th Reunion Class’ high-school graduation. Classmates were provided with the words and music in advance and encouraged to accompany the Glee Club by dancing hula.

In 2009, the Oahu College Band was established and now entertains throughout Alumni Week, including leading the 50th class on their march from the President’s Home down to the Lu‘au grounds.

Student volunteers from the junior class serve the honored guests. By 2007, the number of served guests had grown to over 500. Today, more than 100 current Academy students join the ranks of Lu‘au’s hundreds of volunteer workers, without whom the event could not happen. Since the 24th Reunion Class had their own signature T-shirts, it seemed logical that the student servers also have their own apparel. Students have worn these T-shirts with pride since 1987. They are usually bright yellow and easily identifiable.

All volunteers enjoy a delicious preview of the Hawaiian food in Dole cafeteria prior to Lu‘au. Director of food services and cafeteria staff also provide invaluable support for the event. Marcia Barrett ’74 Wright, assigns staff members to oversee preparation of items on the menu, such as the mixing of poi, lomi salmon, chicken long rice, squid lu‘au and haupia. Wright depends on the Imu Gang to oversee the kalua pig preparation, and the 24th Reunion Class and Imu Gang work together to prepare delicious poke.

Volunteers from the Classes of 1951 – 1953 tear off the stubs on Lu‘au tickets for attendees going through the buffet lines. These wahine are affectionately called “Ticket Taking Aunties” and they have heard every story imaginable about “lost or forgotten at home tickets,” smiling all the while and handling the lines so well that serving is over in 40 minutes. In 2009, this group expanded to include some 1970s gals as well, and in 2013, iPad digital ticket scanners were introduced to the process.

The 24th Class has a traditional post-Lu‘au party on campus. Formerly at the imu, it is now usually held next to Alexander Hall. At this finale to an event they work so hard to organize, the class members provide their own food, drink and music and are responsible for cleaning the area after they leave.

The Alumni Lu‘au will always provide a special reason for coming home to Punahou.