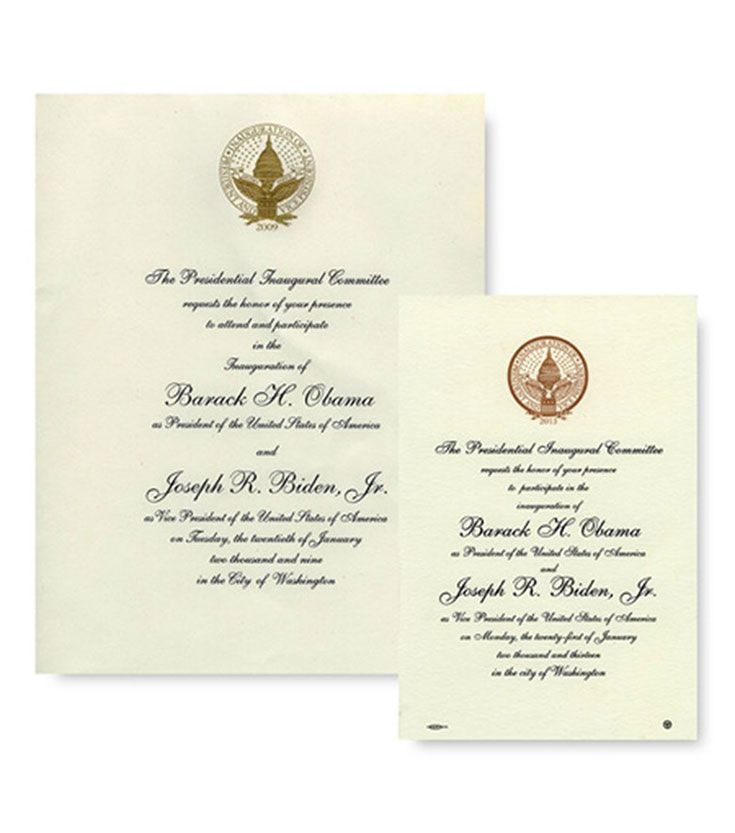 Invitations to the Presidential Inauguration for Barack Obama ’79 (2009)

In the predawn hours of Jan. 20, 2009, more than 1 million people filled the streets of Washington, D.C., to witness the inauguration of the 44th U.S. President, Barack Obama ’79. The immediate vicinity of the U.S. Capitol had been blocked to traffic, so crowds coursed toward the heart of the city.

Punahou students, faculty, staff and alumni were among those making the journey. They included Paula Kurashige, Obama’s former class dean and Eric Kusunoki, his high-school homeroom teacher, who joined the hordes trekking to the Capitol entrances, where their color-coded tickets would allow them to stand within 200 yards of the swearing-in ceremony.

Once past security, Kurashige and Kusunoki dashed to the blue section, arriving just in time to see Obama enter the stage. They watched the JumboTron as their former student rose to take the presidential oath of office. “There was a palpable energy around us, yet a kind of reverence,” noted Kurashige. “People were really listening while he was being sworn in.”

With his left hand resting on Abraham Lincoln’s bible, Obama raised his right hand and repeated the words, “I, Barack Hussein Obama, do solemnly swear ...”

Kurashige recalled feeling a tumult of emotions. “I thought about all the people who supported him throughout his life, but who could not be there,” she said. “I also felt a sense of pride, not only because he was from Punahou and Hawai‘i, but because he was being honored by so many people.”

When President Obama concluded the oath with a firm “So help me God,” the crowd that filled the Mall erupted into a roar. People whooped, pumped their fists and hugged their neighbors. Some stood quietly, tears in their eyes.

The ceremony, which drew an estimated 1.8 million people, was the focus of a weeklong flurry of activities and events. Punahou alumni, faculty and staff, parents and students attended the swearing-in ceremony, and the Punahou Marching Band, accompanied by JROTC cadets and cheerleaders, held the honor of civilian lead in the Inaugural Parade.

Punahou gatherings in the nation’s capital included alumni celebrations and a reception at the home of Punahou Trustee Steve Case ’76. On the School campus, students watched a live broadcast of President Obama’s inaugural speech and took part in a K – 5 parade and pep rally. The celebrations highlighted the journey of a former Punahou student known as Barry.

Barack Obama II was born on August 4, 1961, at Kapi‘olani Medical Center for Women and Children in Honolulu. His father was a Kenyan economist and his mother, a shy Kansas-born student named Ann Dunham. The couple had met while studying at the University of Hawai‘I – Manoa. When Obama was two years old, his father left to pursue a Ph.D. at Harvard, and the marriage collapsed. It would be eight years before the young boy would see his father again. 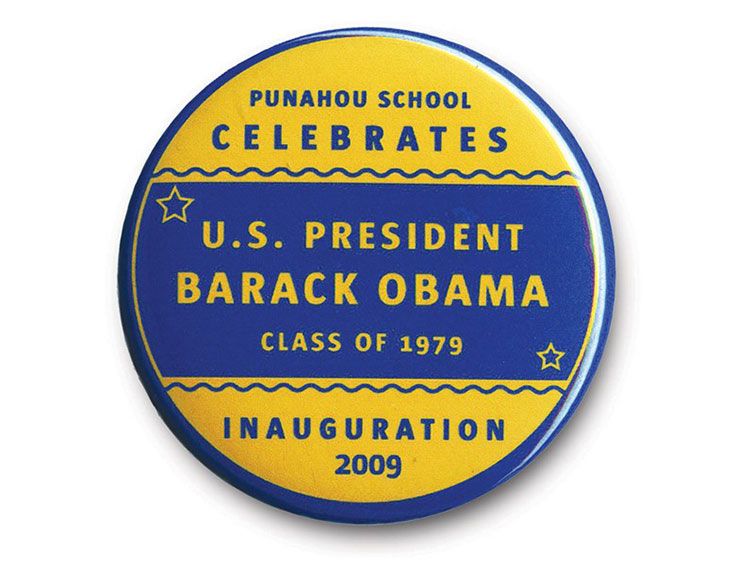 In fall 1971, Obama walked into Mabel Hefty’s fifth-grade class on the top floor of Castle Hall, one of only a handful of new students that year – the more common entry point being in fourth grade.

During a 2004 speech to Punahou students, he described his initial days at school: “One of the challenges for a 10-year-old boy coming to a new place is to figure out how you fit in. And it was a challenge for me, partly because I was one of the few African Americans in the School, partly because I was new and a lot of the students had been together since kindergarten.”

Teacher Mabel Hefty played an important role in this process. She had just completed a sabbatical teaching in Kenya and sought to nurture Obama’s interest in his father’s homeland, sometimes pulling Obama aside after class to tell him stories about her experiences in Kenya.

In May 2011, President Obama hosted the National and State Teachers of the Year Award at the White House, and cited the late Hefty as an important influence.

“When I walked into Ms. Hefty’s classroom for the first time, I was a new kid who had been living overseas for a few years, had a funny name nobody could pronounce. But she didn’t let me withdraw into myself. She helped me believe that I had something special to say. She made me feel special. She reinforced the sense of empathy and thoughtfulness that my mother and my grandparents had tried hard to instill in me – and that’s a lesson that I still carry with me as President. Ms. Hefty is no longer with us, but I often think about her and how much of a difference she made in my life.”

Obama soon entered the Academy at Punahou where he juggled new demands and choices: working a part-time job at the neighborhood Baskin-Robbins; singing with the chorale in freshman and sophomore years; playing basketball; and writing for the school literary magazine “Ka Wai Ola.” Yearbook photos show Obama progressing from a sandaled, sunny ninth grader to a svelte teen sporting a wide-lapelled suit and stylish Afro.

“He was all boy,” remembered Bob Torrey, Obama’s U.S. History teacher. “He was rascally and had lots of pizzazz – the kind of kid teachers love to have in their classes. He paid attention, but he was not what I would call an intellectual student.”

With close friends outside the classroom, however, Obama showed another dimension. “He had a real intellectual bent, his mom being from the academic world,” said classmate Greg Orme ’79, noting Ann Soetoro’s Ph.D. in anthropology. “He had a worldly view. He would talk about people in Pakistan and was a lot more aware of Middle East politics than anybody I knew. He was following conflicts around the world and talked about it all the time.”

Obama’s love of books, a shared family passion, surfaced during more private moments. Orme recalled that after the friends finished basketball practice in the evening, they would head back to Obama’s grandparents’ two-bedroom apartment. “It was Toot (Obama’s grandmother) and Gramps in this small apartment and us two six-footers. We’d raid the refrigerator, and then go to his room. He’d put on his earphones; he liked to listen to Stevie Wonder and jazz, like Grover Washington. So he’d have the earphones on and read his books.”

Obama also possessed the ability to cross high school’s complex social lines. “He was the kind of guy who could walk into a room and navigate the cliques,” said basketball teammate Dan Hale ’81. “My biggest impression of him was the way he could communicate with people. You always felt confident around him, no matter what group you belonged to.” His friends were an eclectic bunch. In a class bursting with athletic stars, Obama was not considered a big man on campus. According to his homeroom teacher Eric Kusunoki: “He was just a normal kid, like everyone else.”

Except he wasn’t quite like anyone else. Obama writes of those years: “I was engaged in a fitful interior struggle. I was trying to raise myself to be a black man in America, and beyond the given of my appearance, no one around me seemed to know exactly what that meant.”

Basketball was one place where he could forget these inner conflicts and Obama threw himself into the game. “He was what I would call a ‘Basketball Jones,’” said Chris McLachlin ’64 who coached the lanky teen during his senior year on the varsity team, which won the state championship. “That’s a person who lives, eats, and sleeps with their basketball: they dribble it to school, they dribble it between classes, they shoot baskets on Middle Field during lunch. And Obama had that real love and passion for the game.”

While not a starter, “He was a leader on the court,” said teammate Alan Lum ’80. “He would call people on it if they were doing something wrong. He would question coaches. A lot of things he did, he did for the right reason; a lot of questions he asked I was thinking in my mind, but he was strong and confident enough to ask them. I respected him for that.”

At the Neal Blaisdell Center in June, Obama graduated with 411 classmates from the Punahou Class of 1979. Orme recalled the two friends standing next to one another, barely able to see over the stacks of lei around their necks. At that moment, amid the jubilation, neither one could have imagined how differently their paths would unfold.

Like many children from Hawai‘i, Obama left the Islands to absorb the experiences that would allow him to claim his full identity and purpose. “He already had that restlessness, he already had this sense of wanting to burst forth to his full potential,” said half-sister Maya Soetoro-Ng ’88.

Obama’s trajectory from then on is well-known: involvement in the anti-apartheid movement as an undergraduate student at Columbia University; three-and-a-half years as a community organizer in Chicago, working with black churches to improve conditions in the poverty-stricken neighborhoods of the South Side; the first black president of Harvard Law Review; a return to Chicago where he organized a 1992 voter registration drive that put 100,000 new voters on the rolls; civil rights attorney; teacher of constitutional law at the University of Chicago Law School; election to the Illinois State Senate in 1996 and U.S. Senate in 2004, becoming the only sitting black member of that institution.

In a 1999 article written for the Punahou School alumni magazine, Obama expressed how his formative years in Hawai‘i continued to influence his work in the political field.

“I believe that the carefree childhood I experienced in Hawai‘i, and the wonderful education I received at Punahou, should not be left to the luck of the draw, but should rather be every child’s birthright,” he wrote. He went on to note that Hawai‘i’s “spirit of tolerance” helped to inspire his own ambition to help shape a “country in which we can appreciate differences of race and religion and ethnicity, while still insisting on our common humanity.”

At Benjamin Banneker Academic High School in Washington, D.C., Obama spoke to students in 2011 about an inspiring eighth-grade ethics class he took at Punahou and how it shaped his sense of purpose.

“I still remember that ethics class, all these years later. I remember the way it made me think. I remember being asked questions like: What matters in life? Or, what does it mean to treat other people with dignity and respect? What does it mean to live in a diverse nation, where not everybody looks like you do, or thinks like you do, or comes from the same neighborhood as you do? How do we figure out how to get along?

“Each of these questions led to new questions. And I didn’t always know the right answers, but those discussions and that process of discovery – those things have lasted. Those things are still with me today. Every day, I’m thinking about those same issues as I try to lead this nation.”

In December 2004, a few weeks before he was sworn in to the U.S. Senate, Obama addressed a packed audience of Punahou students at Thurston Chapel, highlighting the values he learned at Punahou. “There was something about this place and this school that embraced me, gave me support, gave me encouragement and allowed me to grow and to prosper. I’m extraordinarily grateful to this school for the wonderful education that it gave me.”