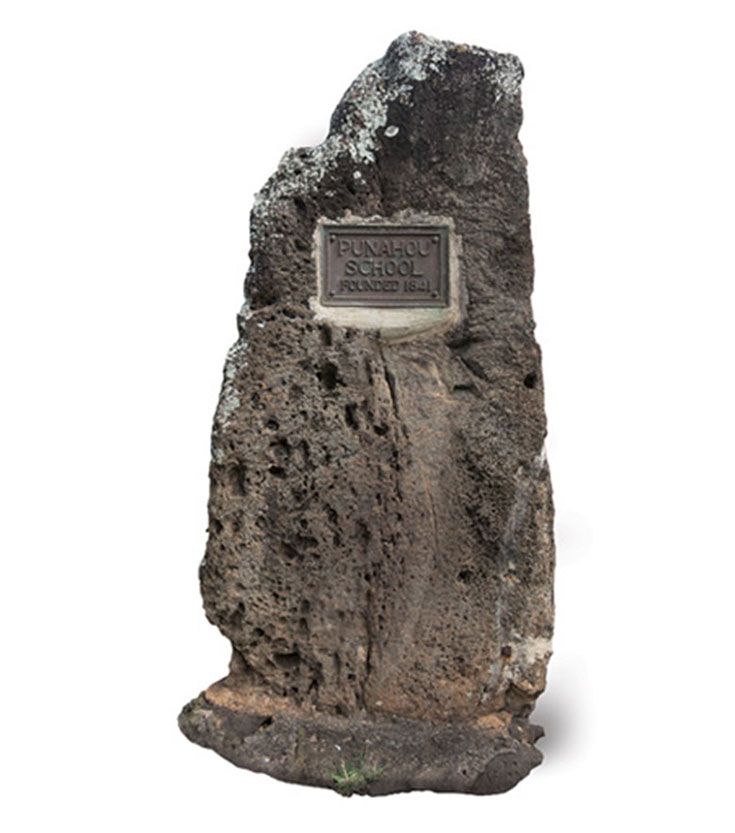 Entering the gates of Punahou an iconic plaque attached to a large stone reads “Punahou School, Founded 1841.” The story for this object belongs not to the plaque but to the sacred stone on which it stands, Pohakuloa.

In the 1830s Queen Ka‘ahumanu ordered that a wall be built from Punchbowl to Punahou to keep cattle out and to help delineate the lands for the parsonage where her friend Hiram Bingham and his family lived. According to missionary accounts, she also ordered two large pohaku (stones) to form a gateway through the wall to serve as the entrance.

The bigger stone, Pohakuloa, would come from a property west of the road leading to Manoa Valley. It was believed that Pohakuloa had a kupua, a local deity, within and was revered for that reason. Shaped like a “mammoth taro leaf,” the sacred stone was believed to have powers of fertility and was often sought out by expectant mothers to impart wisdom and strength to their children – a fitting blessing for education.

In some accounts, Pohakuloa stood over 10 feet above ground and two feet below. When it came time to move the stone to the entrance of Kapunahou, it would not budge. A kahuna was consulted, who stated that, “This is not a stone, it is a man. He is not to be forced, but coax him and he will go.” King Kamehameha III was summoned to coax him to move. The builders prepared an elaborate lu‘au feast for him with special foods and everyone was invited.

In an issue of the missionary newspaper The Friend from March, 1924, Ethel Damon (1901) wrote “The young King then seated himself upon the apex of the rock, and gave the word of command, when rock, King and all were lifted upon the shoulders of the hulumanus – numerous as ants tugging at a kernel of corn – and carried down to its place.”

For the 75th anniversary pageant of the founding of Punahou School in 1916, this dramatic scene was enacted on Alexander Field. The Friend noted that some older Hawaiians appreciated the reverence of the pageant, but raised their concern and dissatisfaction with Pohakuloa’s removal. For more than 20 years, Pohakuloa stood guard at the Punahou gate. Sometime between 1854 – 1859 Pohakuloa, too large to move, was sadly dismantled in order to widen the road.

In a fond childhood recollection, Dr. Albert Francis Judd (1860) wrote, “This rock was about 12 feet high … Often I have climbed to its top and eaten my lunch from my tin-pail thereon.” Broken up by blasts and hammers, Pohakuloa’s pieces today make up the wall enclosing the lot below the lower gate. The stone standing at the School’s entrance today may be either a small piece that remains, or the second of the two pohaku originally placed at the Punahou gates.

The late Glen Grant, Hawaiian historian, author and folklorist, wrote a slightly different version of Pohakuloa’s story in “The Obake Files, Ghostly Encounters in Supernatural Hawai‘i.” In this version, the powerful chief Paki wrapped his arms around Pohakuloa and moved it to its Punahou location. A few years after his removal, the stone was split in two, with the other half taken to Kapi?olani Maternity Home. When the maternity home moved, it then became the property of the Japanese consulate for a few years. When the Japanese consulate left Beretania Street that other half went missing.

While only fragments of Pohakuloa remain today, it is one of the stories that link Punahou to the ali‘i and legends of its Hawaiian history.