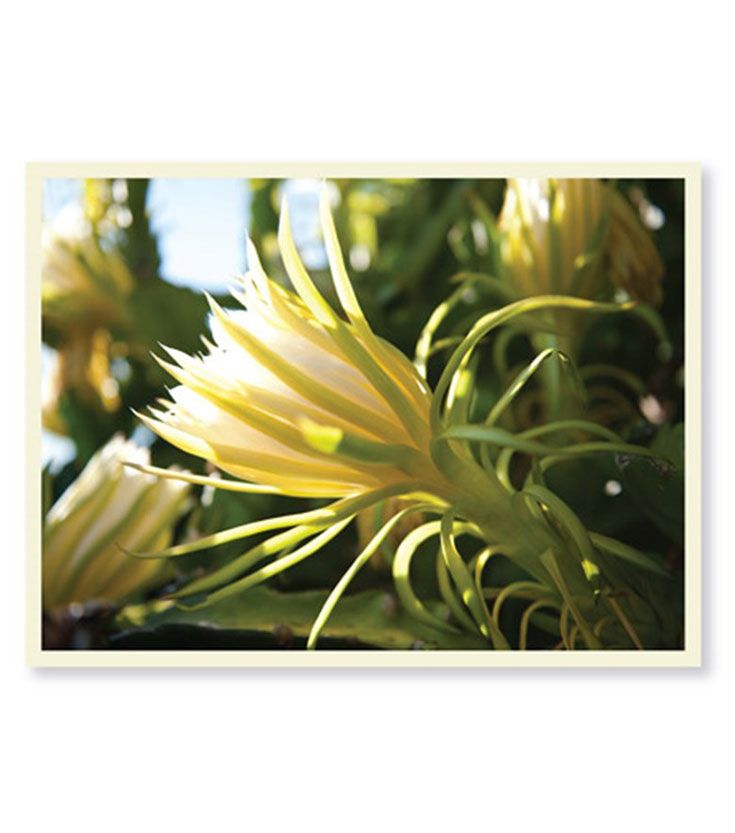 For most of the year, the hedge atop Punahou’s rock walls appears wild, ragged, even menacing with its tangled vines and cactus spikes. But on summer nights, it unfurls a surprising beauty – large, creamy white blossoms with yellow centers. And more intriguing, these fragrant flowers open just once or twice before wilting.

Ephemeral, exquisite, hardy and imposing, the night-blooming cereus (Hylocereus undatus) has inspired generations at Punahou to care for and protect it. With the esteemed hala tree, it is an enduring symbol of the school. One of its common names is, in fact, panini o kapunahou or Punahou cactus.

The hedge, however, predates the school. In 1829, missionaries Reverend Hiram Bingham and his wife Sybil were invited to live on the lands of Kapunahou, so named for the freshwater spring. They were close friends of the reigning queen regent, Ka‘ahumanu, who in 1831 ordered the construction of the area’s first rock walls to prevent cattle from wandering onto the mauka portion of the property. In 1836 the wall along Punahou Street was built, and when Mrs. Bingham was gifted an enigmatic cactus from a traveler who had passed through Mexico, she planted it along this wall near Punahou’s main entrance.

In 1840, the Binghams left Hawai‘i to return to New England, and the property became a school for the children of missionaries. Over the next several decades, Punahou School and its night-blooming cereus grew in size and reputation.

In the 1890s, school officials extended the hedge along Wilder Avenue as far as the Alexander Street gate, quadrupling its size. In the first decade of the 1900s, the hedge was extended to its current length of 300 meters, stretching along the full perimeter of Wilder and Punahou Street.

The community quickly took notice of the curious plant; the flowers only opened in the evening, taking several hours to reach full bloom, and wilted after dawn. During the flowering season, which runs from June to October, visitors came from across Honolulu to glimpse the fleeting blossoms. They often welcome returning students and faculty at the beginning of each academic year with the dramatic impression of a lei encircling campus. Over the years, cuttings were taken as souvenirs and it is believed that many of O‘ahu’s night-blooming cereus plants originated from Punahou’s walls.

The school itself has proudly guarded its famed hedge. In 1924, when the city proposed widening Punahou Street, school authorities bemoaned the loss of property below Alexander Field as it could destroy one of the oldest parts of the hedge. So officials permitted the school to supervise careful transplanting of the cereus, and to everyone’s relief, the hedge thrived in its new location.

During World War II, the United States Army Corps of Engineers commandeered the campus and erected a heavy barbed wire fence on the lava rock walls, in the process injuring the plant. Wrote Punahou President Dr. Oscar F. Shepard: “For two or three days, it seemed as if the Pacific War were a small event compared to the partial destruction of the cereus hedge.”

Seeing the delicate cereus blossoms boosted morale beyond Punahou’s walls. During the war, students picked the buds and delivered them to the bedsides of servicemen at Tripler Hospital – a poetic reminder that life continued to bloom in the midst of adversity.

And throughout the years, students, faculty and staff have incorporated the iconic flowers into school paraphernalia such as Oahuan covers, carnival gear and graduation attire. Cereus blossoms were even added to the Punahou seal for its centennial year, underscoring the plant’s historic and symbolic significance. Original music was created for the 1941 centennial celebrations, including “Lovely Night Blooming Cereus” by the hapa haole music composer Robert Alexander Anderson (1912), most famous for his “Lovely Hula Hands.”

The cactus’s enchanting nature is known world-over as evidenced by some of its many names: Cinderella plant, belle of the night, princess of the night, queen of the night and moon flower. American poet laureate Robert Hayden described its evanescent blooms as a “lunar presence, foredoomed, already dying with a plangency older than human cries.”

However, what observers might not know is that several months after the flowers droop, they grow into the succulent fruit called by various names: pitayaha, pitaya, strawberry pear or dragon fruit. With red or yellow bracteoles on the outside tipped in green, the flesh is either white or beet red with small black seeds. Mildly sweet like a blend between a kiwi and a pear, it is widely-eaten in Southeast Asia, and has recently become popular in the U.S. as it is low in calories and rich in antioxidants.

Local residents can often be spotted around campus in the early morning searching for the coveted fruit. Said one picker who wished to remain anonymous, it’s worth braving the tall walls and spiky scrub as Punahou’s vine-ripened dragon fruits are better than the ones you can buy in stores.