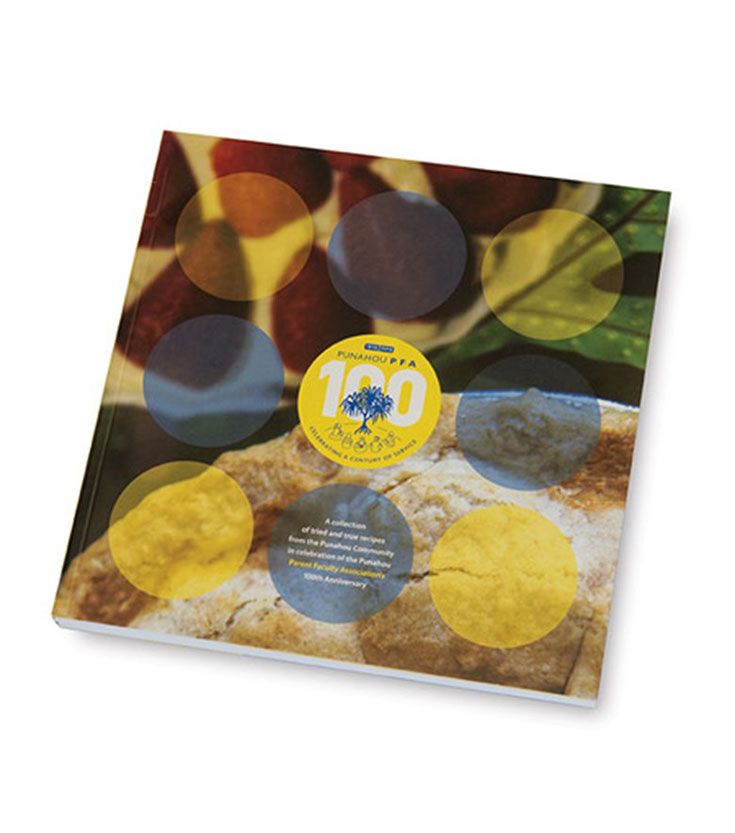 On Nov. 21, 2015, the PFA held a gala in Mamiya Science Center to celebrate its 100th anniversary. Among the many elements that commemorated the organization’s longstanding support of Punahou School and its families was this cookbook. Its recipes are reminiscent of room parent celebrations, bake sales, sports practices and the many other occasions that bring Punahou families closer to their children’s experience. In addition to Punahou favorites like Carnival malasadas, Caramel Cuts and Mango Chutney, one recipe that has become associated with the PFA in recent years is the “Wendy Cake” on page 179. Originally a parent recipe that longtime PFA Coordinator Wendy Bazemore obtained and modified, this rich chocolate bundt cake has been a staple of PFA gatherings for decades – like Wendy herself, to whom the cookbook was dedicated.

The first meeting of the Association of the Mothers of Punahou was attended by over 200 women, and reiterated the goal of providing a venue for conversation between school and home. Among the thorny questions its early members addressed were the width of a school girl’s hair ribbon and the closing time of school dances. In 1916, a guest speaker was invited from Vassar College, initiating a tradition of parent education lectures that continues to this day.

In 1918, the organization changed its name to The Punahou Mothers Association and the following year, it raised a scholarship fund supported by the sale of students’ handiwork. The association also played a key role in encouraging girls’ athletics. In 1922, teachers and fathers were invited to join the organization and it was renamed Punahou Parent Teachers Association, the first PTA in Hawai‘i to be affiliated with the national organization of the same name. From 1941 to 1951, the organization was known as Punahou Lokahi to represent unity, helpfulness and cooperation. It assumed its current name in 1981.

From the group’s earliest days, funded primarily by member dues, the PFA’s financial support of the School has been significant. It includes donations to fund scholarships; provide instruments for Punahou’s first band and, later, uniforms; and participation in various fundraising campaigns. In 1949, Punahou Lokahi opened a Thrift Shop in the basement of Pauahi Hall; it was moved to Slade Drive in 1976 and became a mainstay of campus life for the thousands of students, families and faculty. Graduating seniors often received assistance for their Commencement attire from the Thrift Shop. At its height, the Thrift Shop made as much as $50,000 – $70,000 per year, and its funds supported a number of Punahou building campaigns, the annual fund, and many educational programs throughout the years.

The organization’s Hospitality Committee in the early 1900s played a key role in making sure new mainland teachers felt welcomed upon their arrival to Hawai‘i and Punahou School. In the 1960s, the committee prepared “Aloha Kits” of new dishes, boxes of food and fresh flowers for newly arrived faculty families. Today, the Hospitality Committee continues to welcome parents, faculty and staff at all PFA events by preparing for monthly meetings and coordinating a team of volunteer parents who provide home baked desserts each month. In 1991, the “Buddy Program” was established, which welcomes approximately 500 new families into Punahou School every year.

Carnival became a part of the Punahou tradition in 1932 when the first “Oahuan Campus Day” was hosted by Academy students to raise money for the yearbook. In 1946, the PTA joined forces with the School to coordinate volunteers and solicit donations of sandwiches and candy for the Carnival. In the 1970s, themed fabric was added to the Carnival tradition and the PFA coordinated its manufacturing and distribution for the junior class. Today, there are five PFA Carnival Divisions that bring together 225 Parent Booth Chairs each year, along with 4,500 other volunteers.

In 1956, Parent Education became a formal committee and a tradition of collaborating with Punahou School to bring in national and internationally known speakers began. Notable speakers over the years have included recognized experts on children and family development Dr. Rob Evans, Dr. Michael Thompson, Mary Gordon, Dr. Madeline Levine, Alan November, Dr. Catherine Steiner-Adair and others. In keeping with its long standing commitment to parent enrichment, the PFA commemorated its centennial by gifting the school $100,000 for a speaker endowment fund to perpetuate the spirit of enrichment and learning for Punahou parents, faculty and staff.

At its inception, the Punahou Mothers’ Association included mothers of children in kindergarten through grade 12 on its Executive Committee. Today, each grade has a representative on the PFA Board, which oversees the nearly 400 parents who volunteer each year. Room, Team, and Advisory Period Parents support the classroom by communicating with other parents on behalf of the PFA; coordinating chaperoning and driving for outside activities; coordinating classroom snacks and special meals; assisting with admissions and open houses; serving as ushers for school programs and assisting with classroom activities.

In 2000, with the closure of Slade Drive to make way for Case Middle School, the Thrift Store was also closed and the PFA redirected its support to focus on service, which has been an integral part of the organization from its early days. In addition to the room parent structure, Carnival volunteerism, campus tours and support for new parents. Assistance with senior year activities such as Commencement and Baccalaureate has expanded over the years to include an important parent volunteer component, including measuring and fitting the entire senior class for their graduation attire; serving a pizza dinner at their last Oahuan signing; assembling the beautiful decorations at Baccalaureate and Commencement; and planning and chaperoning the graduation party. Parent volunteers also provide significant support to the School’s admissions and registration process.

At its centennial, the PFA chose to restructure its membership from a dues-paying model to one that includes all currently enrolled Punahou families, faculty and staff. The current PFA Structure includes 19 volunteers on the PFA Board, 70 volunteers on the PFA Leadership Team, 34 volunteer driven committees, 400 Room/Team/Advisory Parents, and hundreds more volunteers supporting school events. For 100 years, this volunteer organization and the many women and men who actively participated in it, have contributed countless hours of time, attention and service to Punahou and the lives of students.