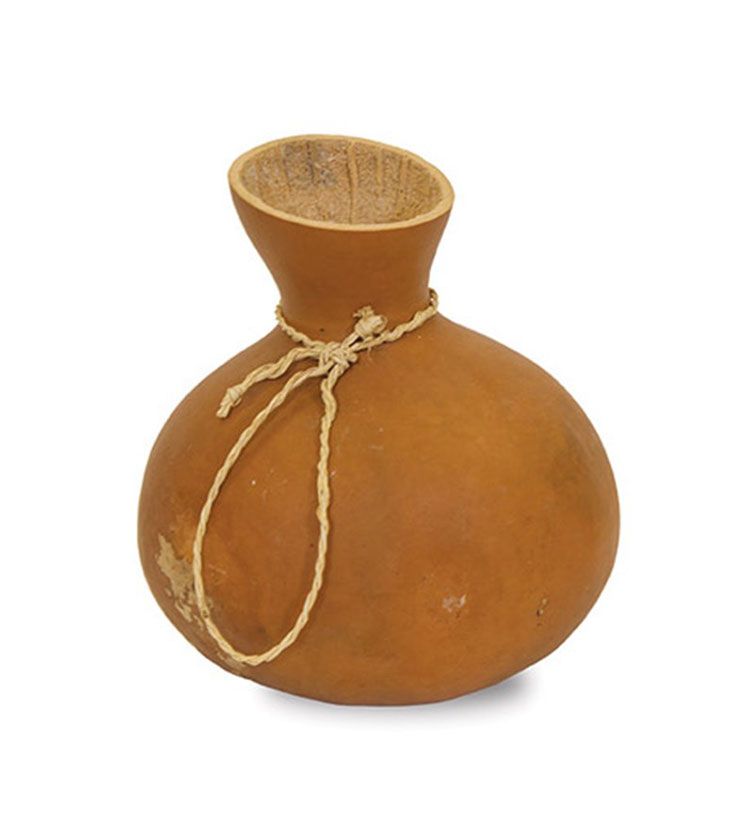 This ‘ipu or Hawaiian musical gourd was made by Zoe Dare-Attanasio ’06 in the 1996 – 1997 school year and it is still displayed in her family’s living room along with other childhood art. Dare-Attanasio remembers that year as being especially significant for the third-grade Hawaiian Studies program, because of a pueo (owl) that had died in the Lily Pond the summer before, heralding a period of new life for the spring.

“All the adults were taking it so seriously, our class T-shirt that year even had the pueo on it,” Dare-Attanasio recalls. “There was a sacred feeling about it all, like we weren’t talking about Hawaiian culture as something in the faraway past. The mythology and significance of these events and this culture were very much present.”

Dare-Attanasio experienced the ‘ipu-making as “one of the highlights of third grade. We all got to pick out our own gourd and then our teacher’s son, who was back from college, helped us saw off the top. We sanded and stained them, and we made the kaula (cord) out of raffia, braiding it around our toe. Finally, we used the ‘ipu in our May Day performance.” As a third-grade after-school care teacher a few years ago, she was transported back to her elementary years when she heard the children singing the same mele, Hawaiian songs, that she had learned 20 years ago.

Third-grade students often take home reminders of their learning about life in old Hawai‘i, whether it’s their May Day ‘ipu, the ‘ohe kapala (stamp) they carve out of rubber to decorate kapa (fabric), or the lauhala headbands they wear during the Third-Grade Lu‘au.

“Realizing the significance of the place that we’re in is so important,” says Dare-Attanasio. “Hawai‘i has been so westernized and it’s easy to feel divorced from what it really is. I think that what I learned in third grade really did shape me. You could feel the aloha in an experience as community-based as the lu‘au. I remember learning about a lot of the practices that almost died out and thinking that these are things we shouldn’t let go of.”

In 1921, Hiram Bingham III – then a professor at Yale University – established a contest with cash prizes for student-made “Things Hawaiian,” including arts, crafts and essays about Hawaiian culture. Students wishing to enter the contest could call upon Mrs. Niiaulaukea, a direct descendant of O‘ahu’s former governor Boki (husband to Liliha, from whom the lands of Ka Punahou passed to Reverend Hiram Bingham), and Keahi Luahine, an expert at making feather capes, lei and other Hawaiian arts. Princess Kalanianaole awarded the prizes for the handiwork, which included a miniature Hawaiian home, a strip of kapa; single- and double-hulled canoes; a feather cape; a feather kahili; and a poi pounder.

Soon afterward, a Hawaiian Committee appointed by President Griffiths and the Mothers’ Association (a forerunner to the PFA) proposed that a Hawaiian culture elective course be included within the Academy History Department. They also proposed general assemblies with invited speakers, lessons in Hawaiian arts and crafts and the incorporation of Hawaiian cultural content in the elementary school curriculum.

In 1928, the elementary school organized a full-scale lu‘au. Its preparations included a hukilau, the gathering of sweet potatoes, preparation of laulau and poi, and buiding an imu. Each grade level from second to sixth had its own role in the event – for example, second-graders were responsible for gathering sweet potatoes on Round Top. Sixth- and third-graders were responsible for gathering taro and preparing poi; and fifth-grade boys made a trip into Palolo Valley to collect stones for the imu. The hukilau was arranged at Laie, and brought in 110 pounds of fresh fish. Afterwards, a Hawaiian garden was started under the supervision of Charles Judd, including wauke plats so that children could learn how to beat kapa the following year. Other Hawaiian trees and bushes were also planted the taro was carefully replanted in the Lily Pond.

Jane Winne (sister to Mary Persis Winne, longtime principal of Punahou’s elementary school) was a strong proponent of incorporating Hawaiian culture in the School’s curriculum during this period. She eventually became chair of the Hawaiian Studies Committee and worked closely with Mary Kawena Pukui to bring authentic sources of Hawaiian knowledge to Punahou’s children and teachers. During Punahou’s centennial year, Winne worked with elementary school teachers to develop a social studies curriculum that emphasized Hawai‘i, its history and culture, and its place in world affairs.

From a Hawaiian Garden to K – 12 Hawaiian Studies

Former Principal Duane Yee recalls that in the early 1970s, a group of teachers that included Lois Lucas, Pal Eldredge ’64, Mary Kane, Malia Ane ’72, Hattie Eldredge ’66 Phillips and Milt Kanehe ’60 spearheaded a grassroots effort to weave Hawaiian culture, history and practice into the backbone of the elementary curriculum. “It began with the garden,” says Yee – a Hawaiian garden filled with native and canoe plants that became the centerpiece of the Winne Units.

In 1973, attention turned to constructing a Hawaiian hale in the courtyard, funded by the Lawrence Newbold Brown ’69 Memorial Hawaiiana Fund and built by Kanehe’s class of 1960. These alumni spent weekends on Hawai‘i Island, gathering ‘ohi‘a wood and pili grass. They laid the lava rock foundation, brought in the expertise of Moke Kekuewa of the Kailua-Kona City of Refuge, and enlisted third- and fourth-graders to assist with thatching. The hale was later replaced by a larger halau structure.

That fall, Curriculum Coordinator Sig Ramler noted in the Punahou Bulletin that, “There is probably more emphasis on Hawaiian Studies at Punahou School at this time than at any period in Punahou’s history.” He mentioned the value of hands-on learning such as the building of the hale with Moku Kekuewa and fishing in the Lily Pond with traditional fish lures. Other features of the Hawaiian Studies curriculum included an eight-week module in second grade; an in-depth study of the pre-Cook era in third grade, together with learning Hawaiian games in PE; a fourth grade language arts program on the study of Hawaiian legends and the two-day trip to Hawai‘i Volcanoes National Park; sixth-grade experiences at Camp Timberline and 20th century issues in Hawai‘i; and two Academy semester courses on Hawaiian history and culture.

Today, Hawaiian Studies at Punahou are designed to expose all students from kindergarten through grade 12 to core values and concepts in Hawaiian culture, including an understanding of the School’s unique roots in island history.

A K – 12 director of Hawaiian Studies position was created in 2011 to further expand these curricular connections across campus. Malia Ane ’72 moved from her home of 30 years in the Winne Units to Kuaihelani Learning Center in Case Middle School. Drawing from her experience in the third grade, Ane has helped to develop the K – 12 Hawaiian Language Program, implement Punahou’s involvement in the Worldwide Voyage of Hokule‘a, and oversee the inclusion of Hawaiian culture across campus through mele, hula, oli, mo‘olelo, culture, values and history.

In addition to the focus on Hawaiian Studies in third grade (see below), other areas in which Hawaiian culture is intentionally incorporated into Punahou’s curriculum include outdoor education in seventh grade, when place-based learning forms the backdrop of several day camps, with visits to places such as Kualoa/Hakipu‘u and the Reppun Farm in Waiahole.

As far back as the 1860s, scholarships existed for Punahou students willing to study the Hawaiian language (with the expectation that they would go on to use it in missionary work), and many of Punahou’s earlier students spoke Hawaiian fluently. Today, Hawaiian language is offered from grades 7 – 12, and is taught through level five. Students in kindergarten through third grade can also learn Hawaiian through an after-school language immersion program that was instituted in the fall of 2014 and is one of only a handful on the island today.

Hawaiian Culture level I and II courses also give Academy students the opportunity to further explore topics ranging from ancient and modern history to hands-on learning experiences through community service and tending the land.

The annual May Day and Holoku program is one of the School’s most popular spring traditions, offering K – 12 students the opportunity to learn and perform mele, oli and hula. All students from kindergarten through grade 5 participate in the May Day program; participation is optional for Middle School and Academy students.

Other initiatives incorporate overarching Hawaiian Studies themes into multiple areas of the School. One example is Punahou’s participation is Hokule‘a’s 2013 – 2017 Worldwide Voyage – coordinated through the Hawaiian Studies program and the Gates Science Workshop to help classes integrate relevant content around the voyage’s themes of culture, aloha and malama honua (caring for the earth).

In third grade, Hawai‘i forms the baseline of all curricular disciplines – from science and math to music and visual arts. The third-grade curriculum encompasses topics such as island formation to the introduction of new flora and fauna, the arrival of early Polynesians and their society and culture. ‘Olelo Hawai‘i (Hawaiian language) is taught as well as traditional customs and practices.

Each spring for nearly four decades, a very special event takes place on the Punahou campus, the memories of which last a lifetime. The annual Third-Grade Lu‘au is the culmination of a year of studies in Hawaiian culture and language. But it’s the preparations that begin months before the event and the lessons learned that stay with students long after the feast is over.

Third-graders prepare by studying the lifestyles and values of the ancient Hawaiians. They take field trips to the lo‘i kalo (taro patch), heiau (temple) and loko i‘a (fishpond) to learn about the traditional Hawaiian ahupua‘a.

Preparations begin in the fall, with the planting of ‘uala (sweet potatoes) and kalo (taro) in the Hawaiian garden. By mid-March, the third-grade classrooms become a bustle of activity as each child gets to experience different facets of preparing a lu‘au. Students weave their own headbands and plates from lau hala; husk and shred the coconuts to make haupia; harvest, clean and pound kalo to make pa‘i‘ai and kulolo; prepare chicken laulau; dry and salt ahi; harvest and clean ‘uala.

Only the children attend the lu‘au itself, so many parents value the opportunities to volunteer during preparation by splitting coconut fronds, husking coconuts or manning the imu the night before the event. A team of students and kumu dig and prepare the imu pit in the afternoon. In the evening, the “imu dads” – one or two from each third-grade class – fill the pit with banana stumps and two 150-pound pigs, chicken laulau, sweet potatoes and kulolo. The food cooks overnight and the imu is opened the following morning. Before the children feast on the fruits of their labor, they gather in the Hawaiian garden to bless the food, pay respect to the land and their kupuna, and to join voices in mele and the chant “I Ku Mau Mau.”

Following the feast, students participate in traditional Makahiki games that they began learning in PE classes earlier in the year.