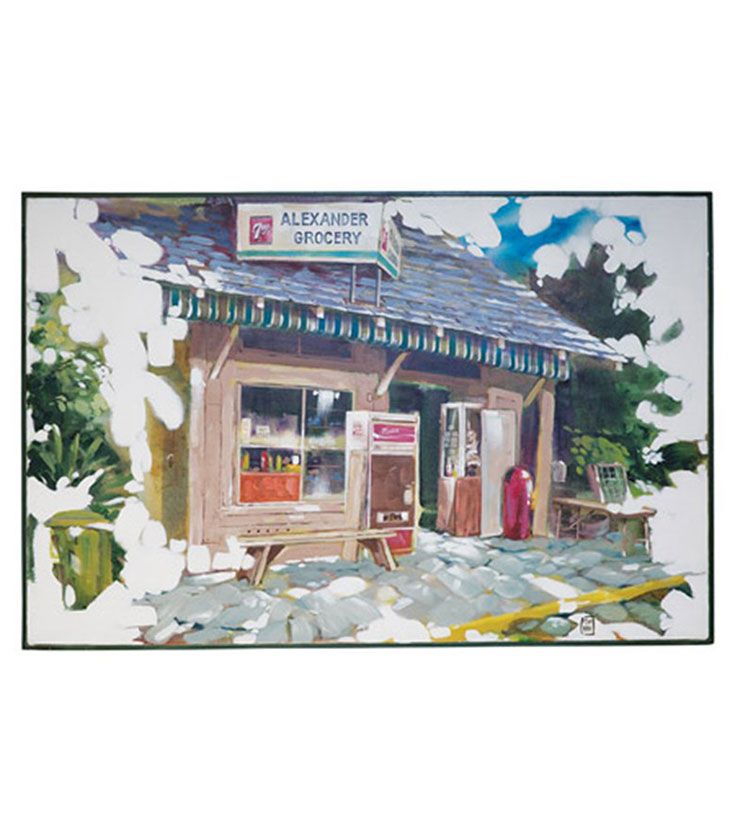 Object submitted by John Field ’72
Story by Lynne Gartley ’74 Meyer and Joyce Salmon
This painting of the Alexander Grocery, completed shortly after its closing, captures the quaint entrance to one of the most beloved off-campus destinations for thousands of Punahou students over the years. Whether known as “Alexander Grocery,” “Chinks,” “Chinx,” or “The Chink Store,” the pocket-sized neighborhood institution that stood at 1523 Alexander Street for 63 years is a ubiquitous memory for three generations of Punahou alumni. The shop first appeared around 1912, the first and only business on a small residential street where kiawe trees dominated and Judge William Whitney’s cow pasture was a local landmark.

Ah Seong Liu was the proprietor and his daughters and son, Dan Liu – Honolulu’s longest serving police chief – labored to sell “good lunches” to Punahou students for 15 cents. George Chun ’32 would continue the Lius’ efforts in 1947, when the store was deemed “off campus” because of its tolerance of smoking and gambling. But things would change under the helm of Albert T. and Esther Lau who took over in 1953. They ran a tight ship, a store that they would be comfortable having their own children patronize. In addition to selling hamburgers, shave ice, crack seed and manapua, they offered a priceless bonus: advice, encouragement, and a personal interest in the students who flocked through their doors.

The result was a place whose 1975 closing – the land had been sold and a 17-story condominium was to be built – was bemoaned by Samuel “Sammy” Amalu ’35 who wrote that, “The Chink Store will be amputated from the body of Punahou.” Thousands of Punahou and Maryknoll students filled Alexander Street to attend the May 27 “Last Hurrah Party.” Ho‘okupu were offered through song, paintings and a gilded shave ice trophy. The Laus were made honorary Punahou faculty members and were surprised by the appearance of their son Richard ’65 who flew in from Fresno, California. As a measure of their devotion, the Laus gifted their benches, shave ice machine, hamburger cooker (and Mrs. Lau’s recipe), glass showcase and the store sign to Punahou. Alas, in a melancholy twist, the sign would never cross Wilder Street. The Saturday before the memorable party it had been stolen from the store.