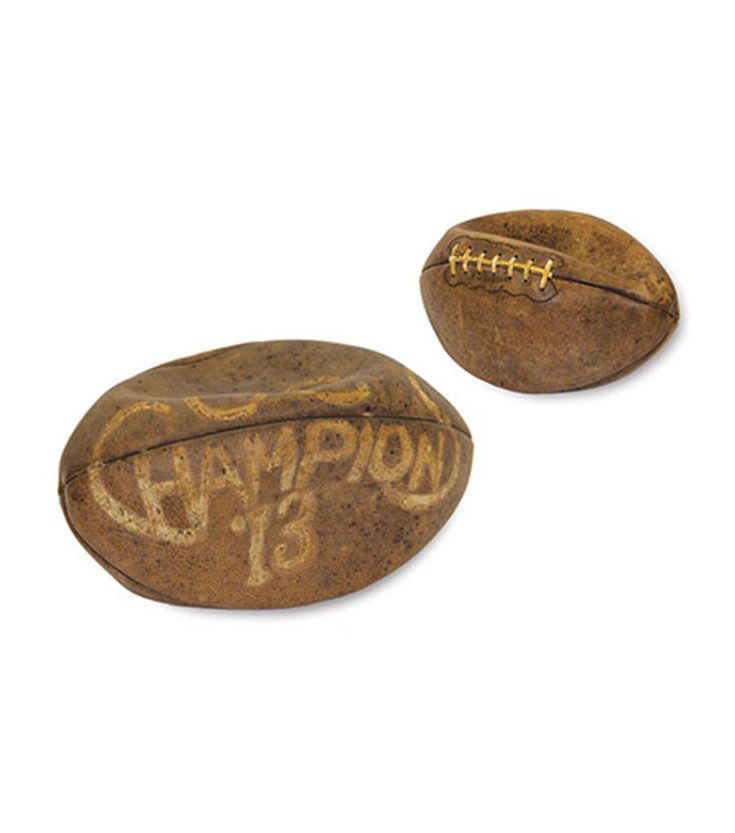 This football from 1913 marked Punahou’s fifth victorious ILH championship game over Kamehameha – its earliest rival. Played on Alexander Field before more than 500 spectators, it was considered without a doubt the best game of that season. Football was still a relatively new sport in Hawai‘i, after having being introduced at Punahou only a few decades earlier. Intercollegiate football rules were initially codified in 1873 on the U.S. continent, and in his book “First and Almost Firsts in Hawai‘i,” Robert Schmitt wrote, “Football appears to have been introduced around 1875, when (former president) Amasa Pratt bought a football for the boys at Punahou and taught them a form of association football.”

The School’s first football team was formed in 1890 by J.D. Wood, a Punahou teacher. It was made up of students and faculty members, and Wood helped to assemble a second team composed primarily of faculty from Kamehameha to provide Punahou with an opponent. For several years, Punahou took on all challengers, mostly community teams that played a few games each season.

In 1903, Kamehameha and Honolulu High School (now McKinley) began to play regular games with Punahou. These early teams frequently included recent graduates, and in some cases “seasonal” students to supplement the student players. Student players often faced opponents who were full-grown men – with only leather helmets for protection, if any headgear at all.

The ILH formally organized in 1909 and enacted eligibility rules to clarify student participation. Punahou won the first nine titles until Kamehameha broke the streak in 1918. McKinley won their first title in 1921 and St. Louis in 1926.

Punahou’s first games were usually played on Chamberlain Field – scarcely big enough for the players themselves, let alone the growing crowds – or on nearby Makiki Field. In response to the pressure for more space, Punahou’s board of trustees began to evaluate the possibility of a new athletic field and Arthur C. Alexander (1883), the board’s secretary, took a personal interest in the project. Fortunately, he was also an excellent engineer who would oversee many of Punahou’s campus improvements. He helped secure a $10,500 gift from his uncle Samuel T. Alexander, a founding partner of the Alexander & Baldwin corporation, for whom Alexander Field was named in 1908.

Until Kamehameha built its own field in 1915, practically every interscholastic football game in Honolulu was played on Alexander Field and for decades, it was the centerpiece of the ILH. Before the first Honolulu Stadium in Mo‘ili‘ili was erected in 1926, many of the Islands’ most memorable football games were played on it. Among them was the first University of Hawai‘i match: a 1909 showdown against McKinley High School in which the “College of Hawaii Fighting Deans” won 95 – 5. The first high school football game at the Honolulu Stadium was played between Punahou and McKinley on November 13, 1926.

In 1914, the ILH ruled that no “postgraduate” could participate in school games. This was understood as anyone who has received a diploma from Punahou, McKinley High School, or Mills Institute (now Mid-Pacific Institute); or anyone who had already played for the league for four years. This rule affected Punahou because, according to Coach Frank Midkiff in the 1914 Oahuan, “it will render every year some of Punahou’s players ineligible.” 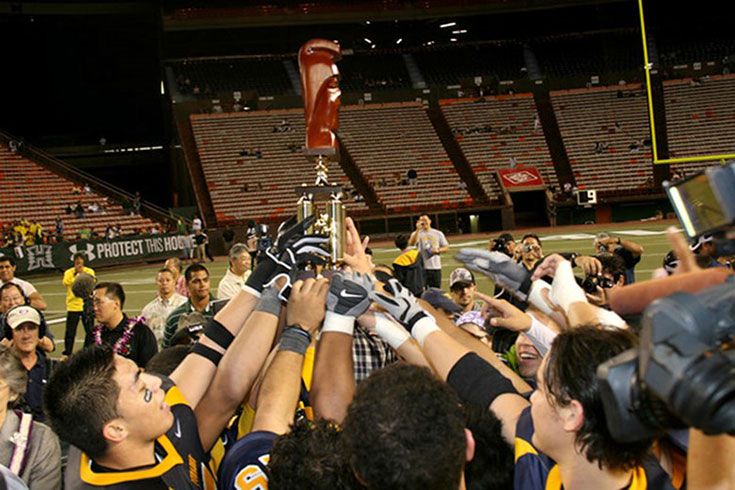 Different teams have stood out over the years, with each generation remembering its own star squads and players.

In 1953, halfback Al Harrington helped Punahou retake the ILH title after a 24-year drought and was named a prep football All-American player. In 1964, when high school football was one of the most popular sports in Hawai‘i, quarterback Charlie Wedemeyer was a standout prep All-American. He later played for Michigan State University and became a football coach at Los Gatos High School in San Jose, until he was diagnosed with Lou Gehrig’s disease, or ALS, and dedicated himself to educating the public about ALS. In 1992 he was awarded the President’s Trophy for Disabled American of the Year.

After the ILH and OIA split in 1970, Punahou no longer faced some of its traditional public school rivals, like Roosevelt and McKinley. The HHSAA initiated state championship play in 1999, with Punahou taking two victories (2008 and 2013), ranking third in overall Division I state championship appearances and wins, after Kahuku and St. Louis.

Many Punahou alumni have gone on to successful college and professional football careers, including: award-winning college football coach and NFL offensive coordinator Norm Chow ’64; Heisman Trophy finalist Manti Te‘o ’09; Mark Tuinei ’78, who played for the Dallas Cowboys, winning three Super Bowls and playing in two Pro Bowls; Pro Bowler and Super Bowler Mosi Tatupu ’74 played for many years with the Patriots and the Rams; Ray Schoenke ’59, who played for the Cowboys and Redskins over twelve years; Charley Ane ’49, a Pro Bowler and twice-NFL champion team captain with the Detroit Lions; his brothers, Herman Clark ’48 and Jim Clark ’48, played for the Chicago Bears and Washington Redskins, and his son, Kale ’71 is the current Punahou football coach, after a career in the NFL with the Packers and Chiefs.

Punahou’s long football tradition has forged intergenerational bonds and a sense of enduring pride for the Buff ’n Blue. Members of former Punahou football teams often come back to visit with current players and share how their experiences have forged lifetime friendships.