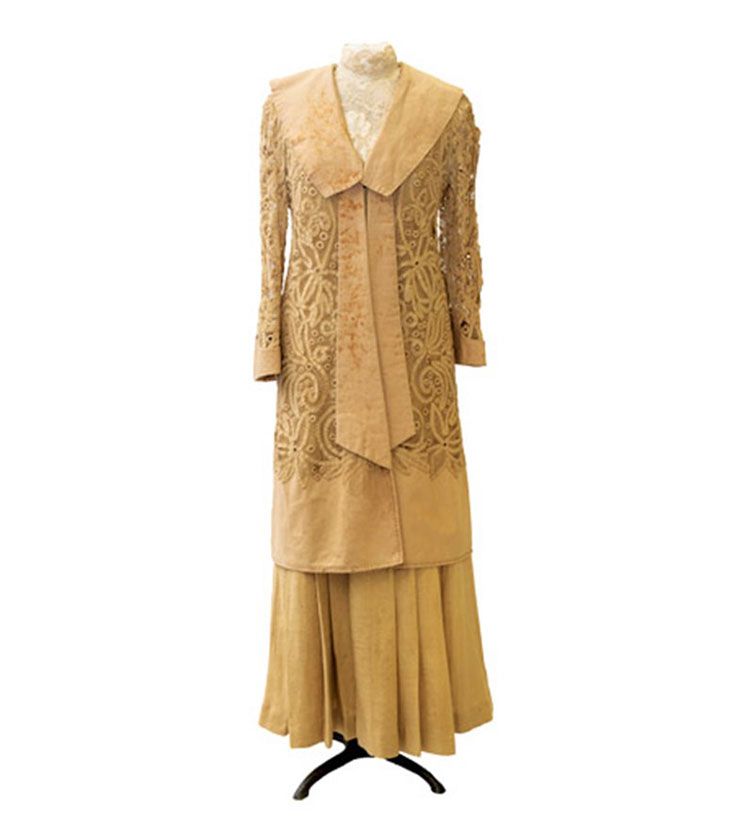 ﻿This dress from the early 1900s forms part of Dillingham Costume Shop’s treasure trove of stage costumes and props and has been used in numerous productions over the years, including a turn-of-the-century interpretation of Shakespeare’s “As You Like It” in 2000, when it was worn by Ricki Sears ’00 Dolan in the role of Antonia. One of the many essential elements of Punahou’s iconic art deco theatre, the Costume Shop helps to bring the magic of drama to life for hundreds of middle- and high-school students each year who perform on the Dillingham stage.

Though the Drama Department was officially formed in 1986, theatrical productions have been a part of Punahou curricular or co-curricular activities since the 19th century. In 1874, Punahou hosted an “annual exhibition” in Honolulu and under “Charade Entertainment” on the program, a group of girls draped in sheets represented the spirits of deceased authors while a male student recited verse.

The first class to graduate under President Griffiths in 1903 decided to put on a full play and selected “King Rene’s Daughter.” Its success was owed largely to Mr. James Castle (1873), who not only coached the players but also donated a lighting system for the Bishop Hall stage.

The Dramatic Club was organized as a result of an English class, which staged five scenes from “The Merchant of Venice” in 1906 and in the following years, various student clubs kept interest in theatre and performing arts high. In addition to the Dramatic Club’s production of “The Rivals” in 1907, two other plays were undertaken – “The Lady of the Lake” performed by the freshman class, and the elaborate May Festival, which included several dramatic episodes in its procession.

In the 1907 – 1908 school year, work in oral expression and dramatics was incorporated formally into the curriculum and the first teacher trained for this purpose was assigned. The following year, a notable production of “As You Like It” was staged outdoors. In 1913, an unusually large number of good singers inspired the selection of “The Chimes of Normandie” as a joint production of the Glee and Dramatic clubs. In 1921, dramatics entered a new period of growth under Miss Una Appleby, whose guidance over more than a decade enabled the program to flourish. She introduced a serious study of drama from historical and literary angles, significantly improving the quality of Damon speech contests that had been initiated in 1872

On the occasion of the School’s 75th anniversary in 1916, Walter Dilingham made a gift of $75,000 for a much-needed assembly hall. The intervention of World War I delayed construction, along with the post-war rise in costs. In 1925 it was decided that the building should contain an auditorium to support work in drama, although music studios, which were part of the original idea, would not be included. In 1927, the Dillingham family offered to pay the remaining amount needed, provided they were allowed to erect the building themselves. Dillingham Hall was dedicated in April 1929 with a fantasy production put on by Miss Appleby’s classes.

After superintendent of grounds Frank Barwick’s departure in 1921, students took an increasing responsibility for various aspects of theatre production beyond drama itself, with shop students from the J.B. Castle School of Manual Arts building an elaborate lighting system and cyclorama for the stage. Under Mr. Elroy Fulmer, who succeeded Miss Appleby in 1932, technical theatre continued to evolve as an important corollary to the study of drama.

Today, theatre and the performing arts are an integral part of the Punahou experience, beginning in kindergarten (Punahou introduced an integrated K – 12 theatre program in 2000). Punahou’s graduation requirements include two credits in the Visual and Performing Arts and the curricular theatre program currently offers nine Academy courses in theatre performance, design and production. Punahou also offers select theatre classes to non-Punahou students through After School and Summer School programs.

There are generally three or four main Dillingham Hall stage co-curricular productions every year. Academy and Middle School productions audition two months before a show opens, and any student can audition if their schedule permits. Other performing arts opportunities for students include Senior Variety Show, Drama Club one acts, Drama Workshop productions and several chapel dramatic presentations in the Junior School.
Back