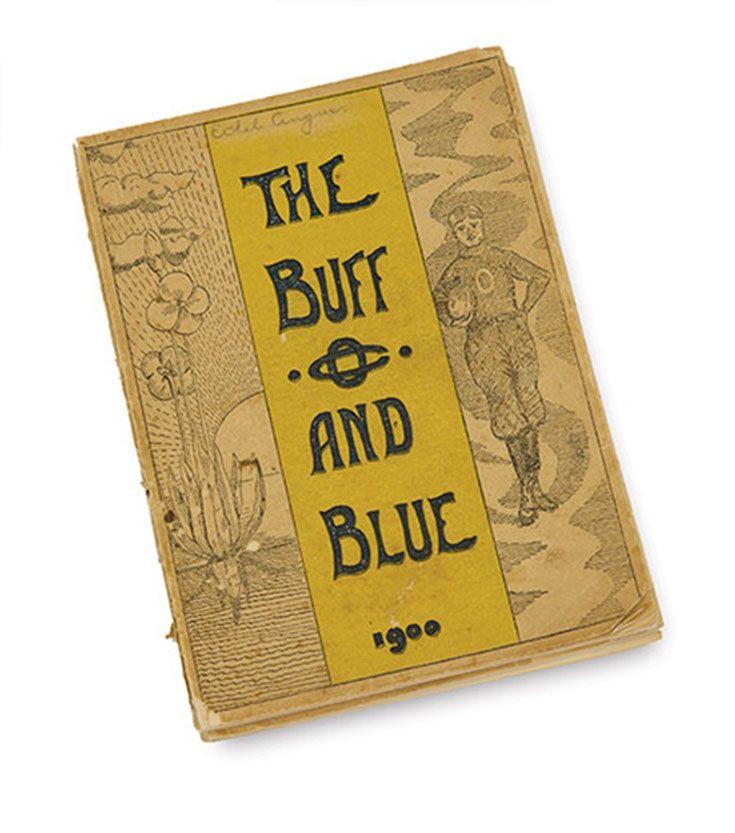 In 1900, the School’s first student-run publication. “The Buff and Blue” was published as a yearbook “to supply a ‘long-felt want’ in Oahu College,” noted its opening editorial. “What the college needs more than anything else is a good live paper – weekly or monthly – which would serve to unify the college spirit and to represent the real college life much better than catalogue or pamphlet ever could.”

In 1901, students decided to publish their own literary monthly with news, views and creative pieces reflecting the life of the school at the turn of the century. The Oahuan served essentially the same purpose as The Buff and Blue, but on a more regular basis, so the former was essentially incorporated into the latter after 1901.

Content in those early editions of the Oahuan was diverse, ranging from fiction pieces, editorials, “who’s who” lists of class and association leaders, sports reviews, jokes and historical essays, along with photographs, illustrations and an assortment of advertising for local businesses in the back pages. While the Oahuan was produced primarily by members of the senior class, in 1913, it was decided that the May issue each year would be published entirely by the junior class.

Each year, the Oahuan was dedicated to an administrator or faculty member, starting with then-President Frank Hosmer in 1900. Sometimes, exceptions highlighted world affairs or anniversary dates, such as the 1916 issue for the “Founders of Punahou” on the School’s 75th anniversary, the 1919 issue dedicated to World War I servicemen, and the 1942 and 1943 issues for the U.S. Armed Forces and “Alumni Serving in the Defense of our Country.” These dedications appear to have ceased in 1970.

The 1928 issue of the Oahuan was the last to feature student essays, as the publication increasingly became an annual or high school yearbook. During the Great Depression, students badly needed extra funds to print the publication and the first Punahou Carnival, building on the existing tradition of “Campus Days,” was organized. It raised $240 for the Oahuan and launched a tradition that would transcend the publication itself in scope and scale.

In the ensuing decades, the Oahuan continued to evolve, sometimes with a dash of controversy. In 1961, then-President John Fox wrote a letter to all faculty and staff and published a statement in the Honolulu Star-Bulletin apologizing for an issue that had gone to print with “objectionable features improperly inserted.” The features, which included substitutions of a chimpanzee face for an administrator and inappropriate – if humorous – photo captions, were inserted by the faculty yearbook sponsor after approval by Principal Walter Curtis. The teacher was fired and the School asked students to return the books on a voluntary basis.

Today, the Oahuan is a nationally recognized, award-winning publication due to its design, photography and overall production quality. It has been joined by a host of other student-run publications, including the monthly newspaper Ka Punahou, the literary magazine Ka Wai Ola in the Academy and the Case Middle School Courier in middle school.

Other publications have appeared and disappeared along the way, such as “Querencia” – an alternative literary magazine published in the 1990s and early 2000s, “Late Mail Poetry,” published by the poetry club of the same name that was led for many years by former English teacher Norman Hindley, and “Dimentia Praecox,” an underground newspaper published by a half-dozen members of the Class of 1967 and ?circulated to Academy students and faculty during late 1965 and early 1966.

Exemplifying the same spirit of entrepreneurial self-expression as the founding of the Oahuan 65 years earlier, “Dimentia Praecox was emblematic of a side of Punahou’s education rarely seen,” noted former Academy Dean Tom Metcalf. “It commented on Administration decisions affecting student life and did not have administrative approval, so naturally, it was banned. Dimentia Praecox, however, was a visible demonstration of what a Punahou education was supposed to be for the students –? an involvement in critical thinking and participation in student life. The paper itself did not advocate rebellion. It just pointed out that perhaps some decisions affecting student life and education could be more in tune with the times.”