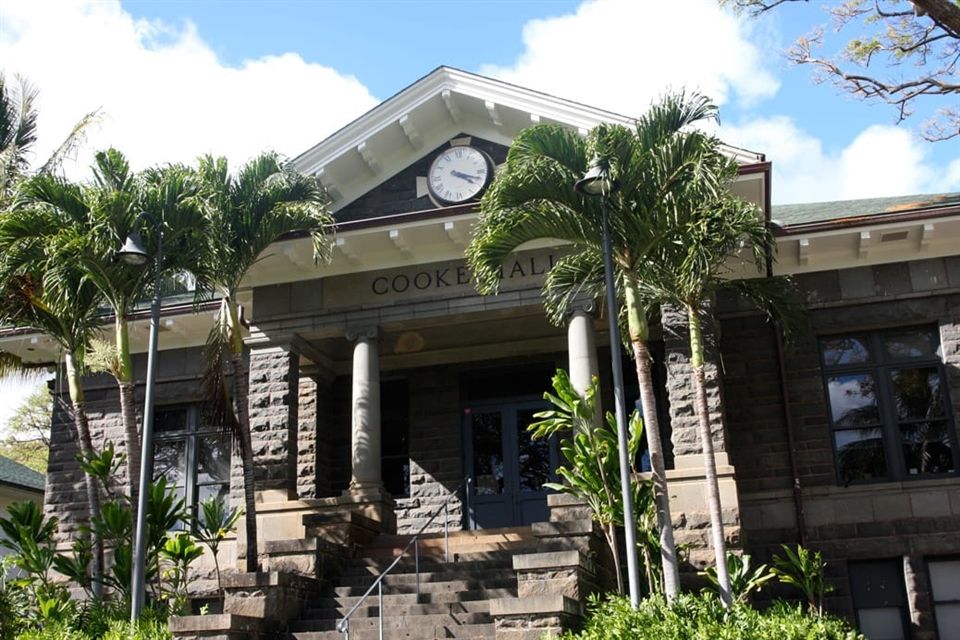 In 1903, a joint meeting of the Trustees and faculty, addressed the overriding concern over a shortage of books. This lead to the construction of Cooke Library in 1908, which opened in 1909 as Punahou's first dedicated library. In 1910, an annex in memory of Charles Montague Cooke was built to hold the art works of the Cooke family, which were moved in 1927 to the Honolulu Academy of Arts.
With the construction of a new Cooke Library in 1964, the original building was then renamed as Cooke Hall. Renovated in 1989 to provide office space, a beautiful stained glass ceiling was uncovered, believed to have been covered by the U.S. Army Corps of Engineers during World War II.

Charles Montague Cooke, son of Amos and Juliette Cooke, members of the Eighth Company of missionaries, was born at the Chiefs' Children's School in 1849. He worked for Lewers & Dickson beginning in 1877 and formed Lewers & Cooke when Mr. Dickson died.
Known as a leader in the organization and financing of sugar plantations, he also was a founder of the Bank of Hawaii. C. M. Cooke was Treasurer at Punahou from 1881 to 1891 and one of the original trustees of Bishop Estate.
Cooke's wife, Anna Charlotte Rice, daughter of William and Mary Rice, was born at Punahou and, with her husband, was well-known for her philanthropy. Together they founded the Aquarium in Waikiki and Mrs. Cooke founded the Honolulu Academy of Arts.
Back