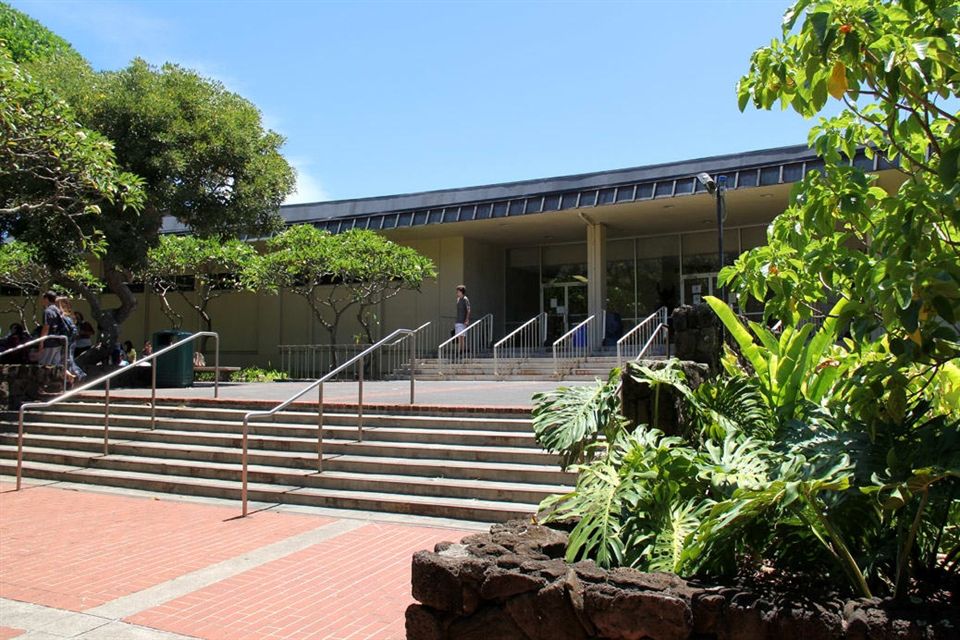 Completed in 1964, Cooke Library houses a variety of resources and learning spaces for Academy students, including the Cooke Learning Commons. It also contains the Punahou Archives, Lum Hawaiiana Room, Kirsch Gallery – an exhibit area for creative arts, the Roy and Estelle L. Kelley Educational Technology Center including the Technology Service Center and classrooms.
As faculty schoolwide build on the successes of flexible and unprogrammed spaces, Cooke Library has undergone a number of experiments in its internal spaces since 2015, adding areas like a video makery, an “unfinished theater” in Morita-Sony Center, a peer-to-peer learning center, a café, a restorative studio for activities like meditation and yoga, and an exhibit space.
The Academy Learning Commons will eventually structurally repurpose Cooke Library and reconnect grades 9 – 12 to the center of campus by creating innovative new spaces for study and collaboration. The architectural transformation of Cooke Library into the Academy Learning Commons is still in the planning stage.

Cooke Library was constructed in 1964, with funds from the long standing endowment of the Cooke family. The Cooke family's gift provided for the construction of the original Cooke Library in 1908, now known as Cooke Hall, as well as furnishings and books.

Charles Montague Cooke, son of Amos and Juliette Cooke, members of the Eighth Company of missionaries, was born at the Chiefs' Children's School in 1849. He worked for Lewers & Dickson beginning in 1877 and formed Lewers & Cooke when Mr. Dickson died.
Known as a leader in the organization and financing of sugar plantations, he also was a founder of the Bank of Hawaii. C. M. Cooke was Treasurer at Punahou from 1881 to 1891 and one of the original trustees of Bishop Estate.
Cooke's wife, Anna Charlotte Rice, daughter of William and Mary Rice, was born at Punahou and, with her husband, was well-known for her philanthropy. Together they founded the Aquarium in Waikiki and Mrs. Cooke founded the Academy of Arts.
Back