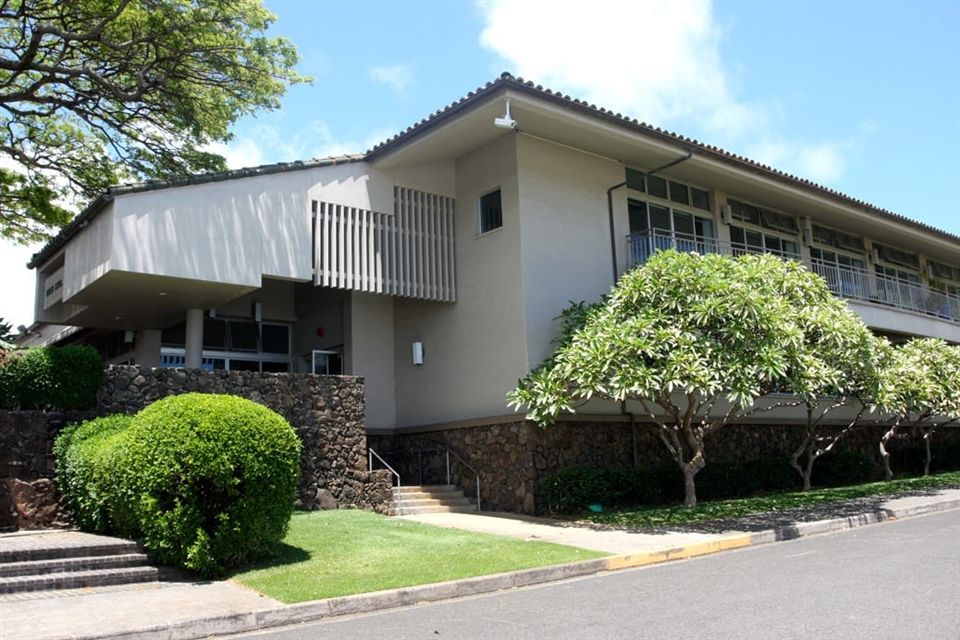 Dole Hall provides cafeteria, snack bar and dining facilities for all students, faculty and staff. It includes three cafeteria spaces, the intimate “Senior Dining Room” used by grades 1 – 3, the main cafeteria and the faculty dining room. The bookstore is also located in the building.

The first Dole Hall, a two-story coral structure, was built in 1848 to house Reverend Daniel and Emily Dole, as well as to accommodate girl boarders. Structurally, it formed a corner of the E-building (no longer standing), matched by Rice Hall on the ʻewa side. During major renovations from 1905 to 1907, both Dole and Rice Halls were demolished and the second Dole Hall was built, as a dining hall, next to Castle Hall.
The current Dole Hall is the third one. Construction was funded by money raised in memory of former students who served in World War I, World War II and the Korean War, and was completed in 1952 as part of Punahou’s Memorial Center. The building was renovated in the summer of 1986.
Reverend Daniel and Emily Dole
Reverend Daniel and Emily Dole arrived in Honolulu in 1841 as members of the Ninth Company of Missionaries. Their arrival and Mr. Dole’s acceptance of the position as principal of Punahou School signaled the founding of the long-awaited school.
From Mrs. Dole’s diary:
“In the beginning, we are to move to Punahou, that is a small plantation of about 30 acres, 2 miles from town…It has been occupied in raising sugar cane & taro or kalo and other vegetables for the supply of the mission. There is a cottage on the premises, built of dobies with thatched roof into which we shall move…After our settlement, the first object will be to urge onward the erection of the schoolhouse & dwelling house, for the further accommodation of the boarding school.”
Reverend Dole preached at the Seaman’s Chapel on Bethel Street while supervising the building and outfitting of the “E-building”. Once school began at Punahou, he oversaw the teaching and fieldwork, as well as running the small school. Mrs. Dole assisted both in the classroom and in the kitchen and boarding facilities. Mrs. Emily Dole passed away in 1844 and Reverend Dole subsequently married Mrs. Charlotte Knapp, widow and member of the Eighth Company. Reverend Dole resigned his position at Punahou in 1855 and moved to Kauai where he ran a church and school.