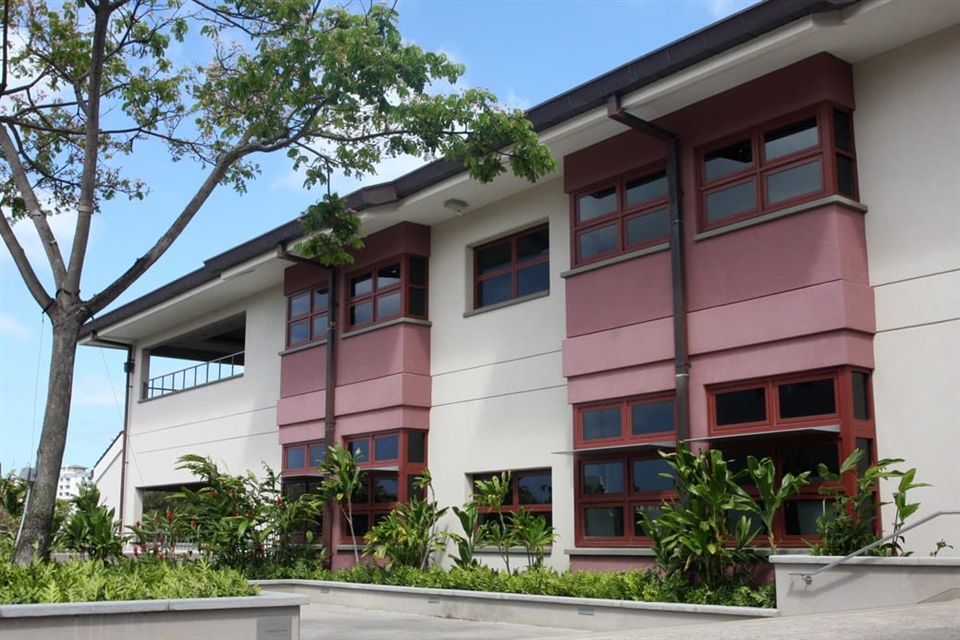 Dr. Edison and Sallie Miyawaki Family Hall is one of the 8th grade classroom buildings of the Case Middle School complex. The building houses two teams of roughly 90 students each and features 4 classrooms (English, math, social studies and science), as well as team space for gatherings and test taking.

Completed in 2005, this building honors the Miyawaki family for their generosity to Punahou.

Dr. Edison Miyawaki is the chairman, president, and CEO of Family Health I and II, which operate skilled-nursing facilities in Honolulu. He was educated at Loyola Marymount University in Los Angeles and the George Washington University School of Medicine in Washington, D.C.
Miyawaki became the first Japanese-American to purchase an ownership interest in a National Football League (NFL) franchise in the early 1990s. A partner-owner of the Cincinnati Bengals, he worked annually to bring the Pro Bowl to Hawaii and is an investor in the National Basketball Association's team the Boston Celtics.
On numerous boards, including Chaminade College, Bishop Museum, Loyola Marymount University and the Japanese-American National Museum in Los Angeles, he currently is board chair for the East West Center and is advisor to Shiseido Company and the Shiseido Social Welfare Foundation. He is an Overseas Board member of Harvard Medical School, Beth Israel Hospital and Deaconess Hospital. The Edison H. and Sallie Y. Miyawaki Gifts for Teaching in Neurology at Harvard Medical School is one of many of his major philanthropic projects.
Back