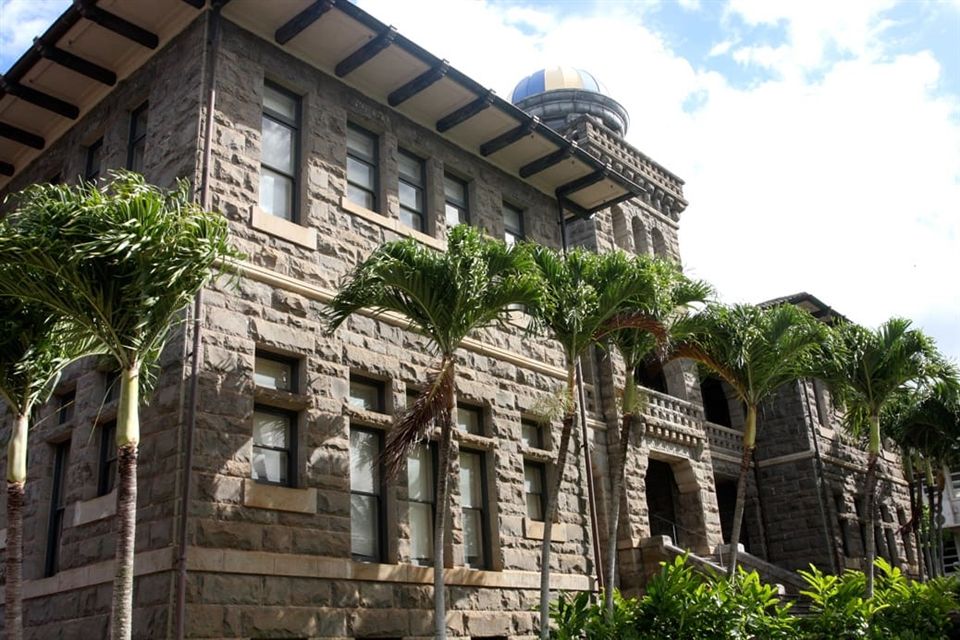 Easily recognized by its unique buff and blue dome, Pauahi Hall houses Academy English classrooms and faculty offices, and is the home of Ka Punahou (Academy newspaper) and the Oahuan (Academy yearbook).

After a $50,000 donation by Charles Reed Bishop, the foundation for Pauahi Hall was laid in 1894. Built with blue lava rocks from the entrance of Manoa Valley, it was completed in 1896. Mr. Bishop chose to name the Hall for his wife, Princess Bernice Pauahi Paki.
In its early years, Pauahi Hall featured classes, a library, and the school's main assembly room. Following the School's displacement from campus during World War II, Pauahi Hall housed classroom space, as well as the administrative offices, until the construction of the new (Sullivan) Administration Building in 1972. The building then underwent a reroofing in 1974, and a major interior renovation in 1990, reopening in 1991 as part of the Sesquicentennial.
Pauahi Hall is listed as a historic site on the National Register.

Charles Reed Bishop arrived in Honolulu in 1846, en route to Oregon, and stayed, beginning as a clerk in the government finance department for $1 a day. In 1850, he married Princess Bernice Pauahi Paki and was active as an advisor and member of the privy council to four kings and Queen Liliuokalani.
His gifts to Punahou both in service as a Trustee for 25 years (1867 – 1892) and in monetary support, made him one of Punahou's greatest benefactors.
From his earliest gift of $5,000 for Punahou's 40th anniversary fund and his "challenge gift" of $15,000 which funded the Bishop Hall of Science, Mr. Bishop's generosity was timely and significant. His gifts formed the basis of Punahou's endowment and provided for expansion of the physical plant.
His belief in the ideals of Punahou and the future of Hawaii fueled his commitment and generosity.

Born in 1831, Princess Bernice Pauahi Paki was described as a gifted and well-rounded pupil, and a favorite student of Mrs. Cooke. Paki married Charles Bishop at the age of 18.
The great granddaughter of King Kamehameha I, she refused her opportunity to become queen after Lot Kamehameha V. Her death in 1884 created the Bishop Estate trust and subsequently founded Kamehameha School.
Back