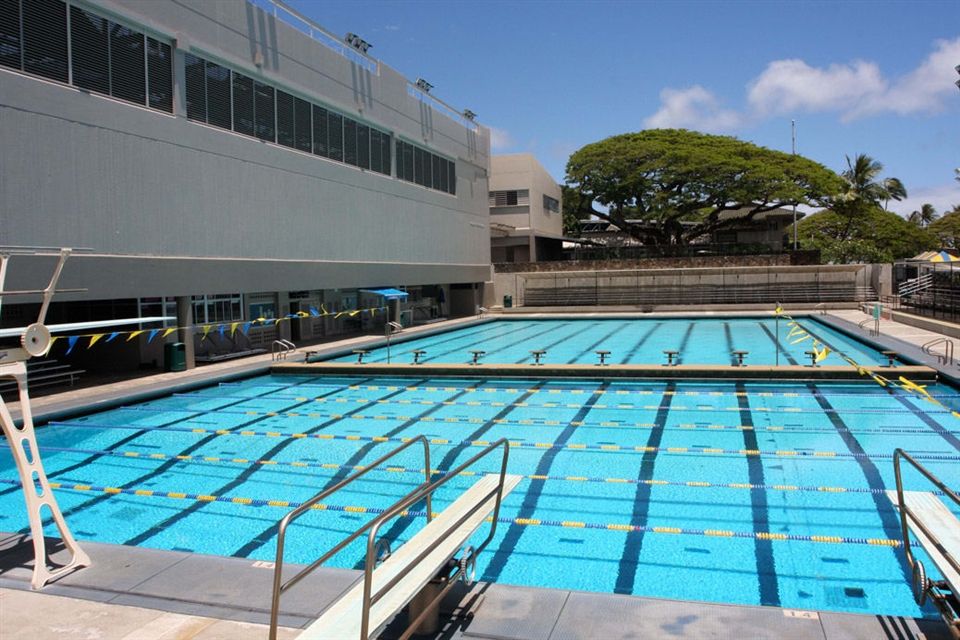 The C. Dudley Pratt Aquatic Center, at the ground level of Hemmeter Fieldhouse, is comprised of the Elizabeth P. Waterhouse Pool and the facilities that support the Punahou swimming program including the Harry Steiner Pool Office.
With a depth of at least 9 feet for its entire length, the Olympic-sized 50 meter by 25 yard Waterhouse Pool is the largest of any school in the state of Hawai'i (including the University of Hawai'i), at more than a million gallons.

The original 75 by 35 foot pool was dedicated in 1922 and named to honor the memory of student Elizabeth P. Waterhouse. The Dudley Pratt Aquatic Center and replacement pool were built in 1981 as part of a massive Physical Education and Athletics Complex renovation, and the new pool was designed to be "fast" and built at 50 meters by 25 yards to accommodate metric competition.
Upon its completion, Peter Powlison, former teacher, later Trustee, and legendary competitive swimmer dove into the new Waterhouse Pool and swam the first lap in front of a cheering Punahou crowd.

C. Dudley Pratt, of missionary descent, attended Yale University where he was an All-American swimmer. As a boy, he was an Eagle Scout, and after returning to Hawaii to practice law, he continued his support of the Boy Scouts, which bestowed on him numerous local and national scouting awards.
He was the father of the Red Cross Life Saving Program, a deacon and trustee of Central Union Church, and a trustee of Punahou School for thirty-five years. He devoted countless hours to Palama Settlement, the Honolulu Academy of Arts and the Amateur Athletic Union.
The business community knew him as "Mr. Rotary." He served as the President of the Rotary Club of Honolulu and as the Governor of the Rotary District for Hawaii. Professionally, he was recognized for his work in real property law, probate and estate planning. He served a term as president of the Hawaii State Bar Association.
In 1962, the Punahou Alumni Association awarded him their prestigious 'O' in Life Award.

Daughter of Trustee John Waterhouse, Elizabeth Pinder Waterhouse was killed in an automobile accident in 1920, two years before her scheduled graduation from Punahou.
Back