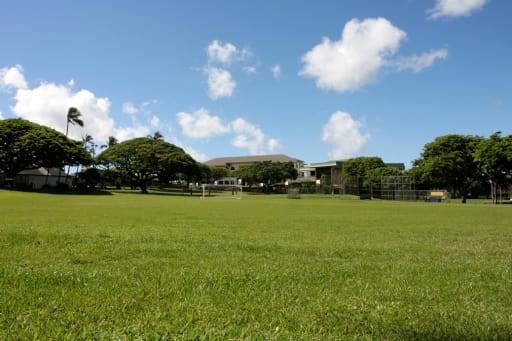 Central to the campus, Rice Field is primarily an open, multi-purpose field, featuring one softball diamond and three full outdoor basketball courts. The field is used for physical education curriculum and ILH athletics, and is a popular spot with Junior School students for free play. Rice Field is also home to events like the annual Sustainability Fair, Alumni Reunion Lu'au and Flaming P Ceremony.

Having spent much of its early life as farm land, tended by the students, this field began to take a shape most similar to its current one in the early 1900s. The name Rice was originally applied on campus to one of the original school buildings, in honor of two of the school's earliest faculty. Built in 1844, Rice Hall was a boarding facility and home to Mr. and Mrs. Rice, which was eventually demolished in 1907.
The second iteration of Rice Hall, also a dormitory, was demolished in 1950 to make way for construction of the Winne Units. Adjacent to that site, Rice Field, also known as "middle field ," was then chosen to continue to honor their name.

William and Mary Rice arrived in Hawaii in 1841, as members of the Ninth Company of missionaries, and were sent to Hana, Maui as schoolteachers. In 1844, they left Hana to teach at Punahou School. William became a trustee of the school in 1849 and was described as rooted in the practical and business side of education, providing an example of a noble, unselfish life. Mary was said to have taught lessons of priceless value, which could not be learned from books. The Rices moved their family to Kauai in 1854, where William managed the Lihue Sugar Plantation.
Back