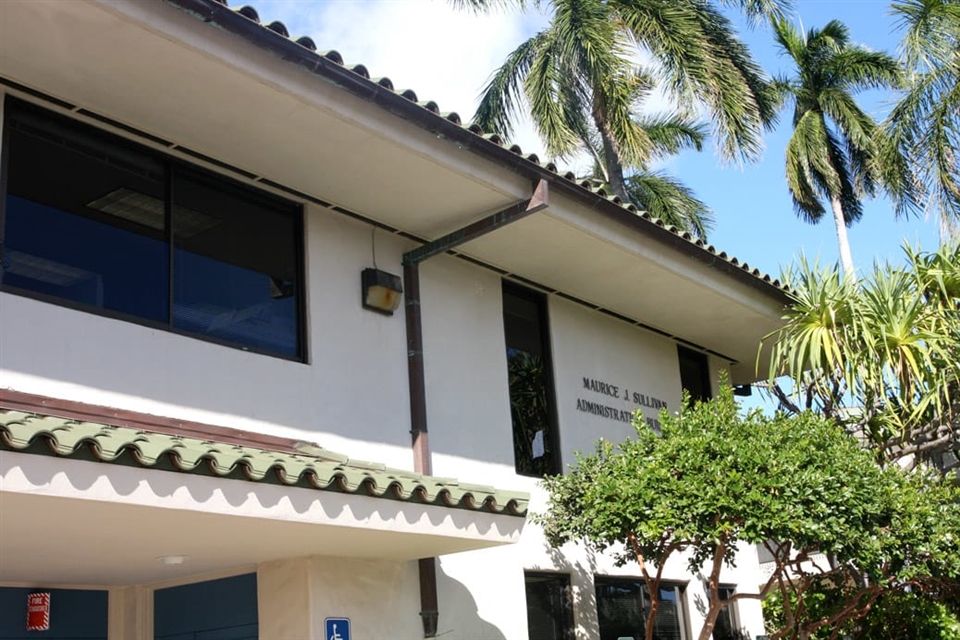 Following the School's displacement during World War II, the administrative offices were housed in Pauahi Hall. By 1970, the need for additional administrative space and the severe state of disrepair of Pauahi created the need for a new administration building. Completed in 1972 with funds raised in conjunction with the School's capital fund drive for the new Bishop Hall and Learning Center, the building would later be named to honor Trustee Maurice J. Sullivan.

Maurice Sullivan was born in Ireland and sailed to the United States at age 17. Drafted into the Army in World War II, he was sent to Hickam Field as a buyer for the officers' and enlisted men's messes. His buying rounds led him to become acquainted with the Lau Kun family, operators of the Lanikai Store. After his discharge he went to work for the family. He opened the first Foodland in 1948, Hawaii's first supermarket.
Sullivan went on to open more than 175 retail stores, including Food Pantry, and brought McDonald's to Hawaii, eventually operating more than 75 restaurants in Hawaii, Guam, Saipan and Ireland.
But he may have devoted as much energy and enthusiasm to charitable works as to business. The Boy Scouts of America-Aloha Council named him Distinguished Citizen of the Year in 1984. The American Red Cross-Hawaii Chapter named him Humanitarian of the Year in 1989. Sullivan served on many boards and fund-raising committees, and one of his favorite causes was St. Francis Hospital.
Sullivan served as a Punahou Trustee from 1977 to 1985, and his four children Kitty '75 Wo (Trustee), Jenai '77 Wall, Colleen '79 and Patrick '81 attended Punahou, along with three grandchildren.
Back