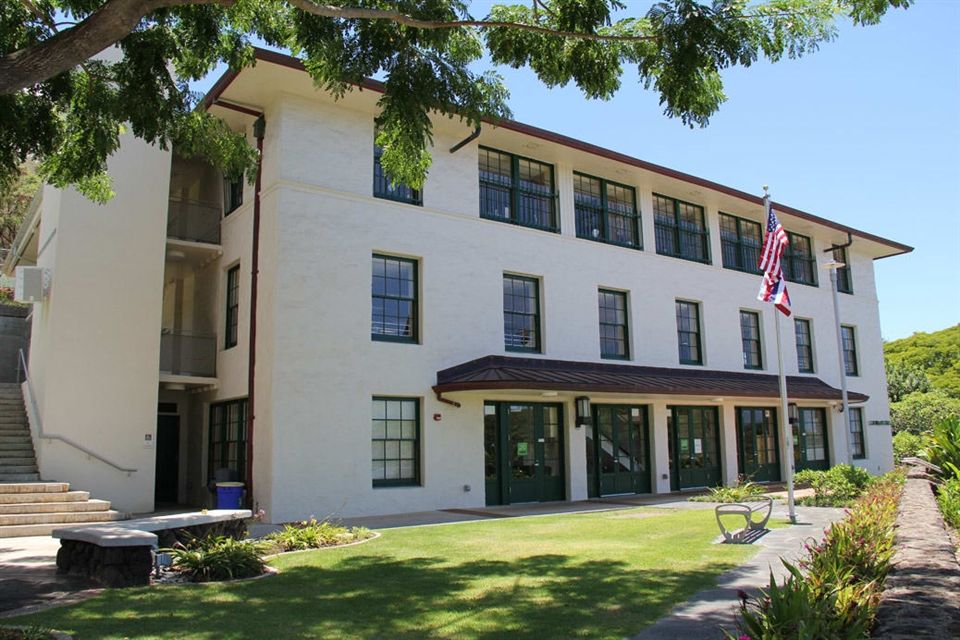 Moving the boys out of Dole Hall, Wilcox Hall was built in 1936 as a dormitory, equipped with a sun heater and furniture built in the Castle School of Manual Arts. With the onset of the war with Japan in 1941, the boys were evacuated as the U. S. Army Corps of Engineers set up office and residence on campus.
The boys returned in 1945, and Wilcox Hall remained a boys dormitory until 1961, when the boys’ boarding program was phased out. The girl boarders were then moved in from Castle Hall, until the entire boarding program ended 1963.
Newly remodeled in 1964, Wilcox Hall became home to Punahouʻs Kindergarten students, who moved from their former homes at Frear Hall (1961 – 1962) on Punahou Street and Winne Units (1962 – 1964). The classroom annex, Wilcox F, was later added in 1988.

In 2008, Wilcox Hall closed its doors for renovations, to become an arts and literacy creative learning center as part of the Omidyar K – 1 Neighborhood, which opened in the fall of 2010.
George Norton Wilcox
George Wilcox was born in 1839 in Hilo, the son of missionaries. He came to Punahou at the age of 10, graduating in 1860, and went on to graduate from Yale University in 1863. Returning to Hawaiʻi, he began sugar planting in Hanalei with his brother, Albert, eventually took over at Grove Farms.

He was made a Trustee of Punahou by royal decree in 1882 and held that position until 1901. He was an active public servant, involved in every legislature under the Kingdom and the Republic.
Beyond his significant gifts to Punahou to help build the original Bishop and Dillingham Halls, Wilcox contributed to The Salvation Army, the Boys’ and Girls’ Homes of the Salvation Army, Honolulu Military Academy, Mid-Pacific Institute, the YMCA and YWCA, and the Hawaiian Board of Missions.