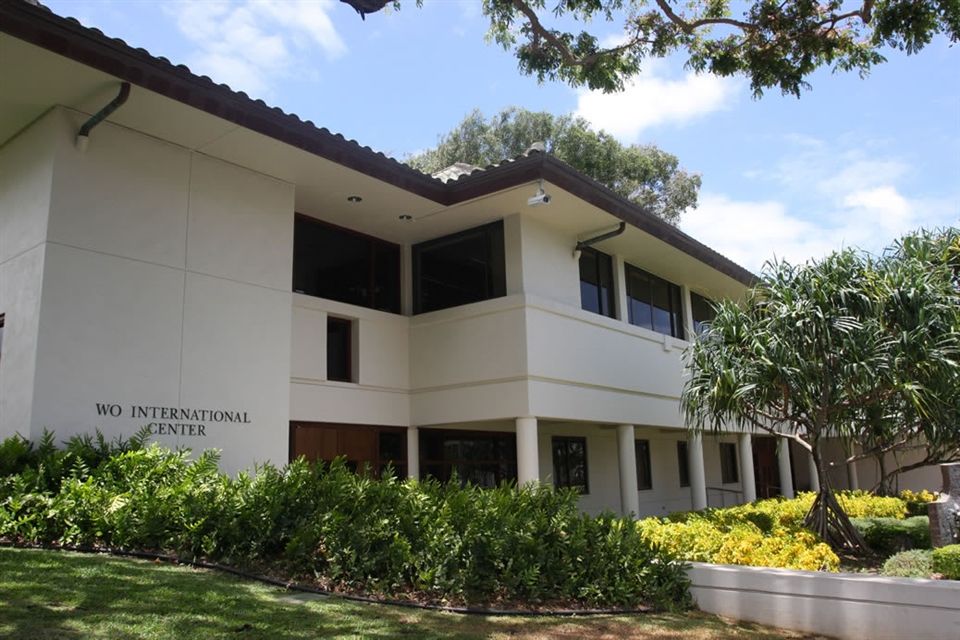 Wo International Center is the headquarters for student and faculty programs supporting the school's global education initiative. The center houses four classrooms, a telecommunication room, the 150-seat Luke Lecture Hall and conference spaces, as well as office space for Wo Center program administration and a portion of the Advancement Department.

Beginning in the 1960s, Punahou was home to an outreach organization known as the Foundation for Study in Hawaii and Abroad (FSHA). Led by long-time foreign language and curriculum expert Siegfried Ramler, FSHA brought foreign students to campus each summer to learn English, and sent Hawaii youngsters into the Pacific to learn French, Japanese and Mandarin Chinese.

With a generous gift from Jim '43 and Bob '41 Wo funding construction of a dedicated facility in 1993, FSHA agreed to disband and come under the umbrella of the Wo International Center.

The 150-seat Luke Lecture Hall, honors a major gift by K. J. Luke and his family.

Jim '43 and Bob '41 Wo are a team in many aspects of their lives. After working together to take over and transform the family business C. S. Wo and Sons, they continued their partnership in commitment to community organizations.

In addition to the Wo family's generosity, Jim also gave of himself as a Punahou Trustee from 1970 until 2001, serving in a number of leadership capacities.
The brothers' exposure to worldwide business led them to support global studies opportunities for students throughout Hawaii.
Back