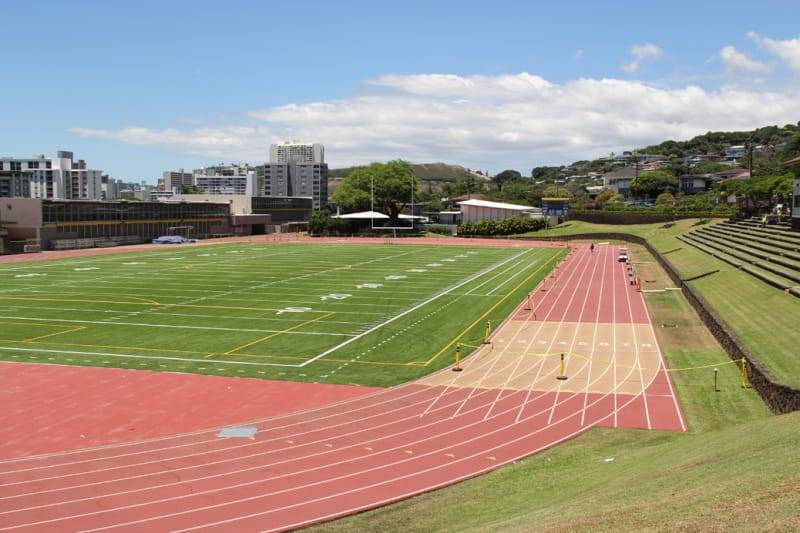 Originally built in 1907, the field honors Samuel T. Alexander and the support of both Alexander & Baldwin, Inc. and The Atherton Family Foundation. For several decades, the original field was considered to be the best all-around school athletic field in Honolulu. In 1931, the Interscholastic League ruled that the track would no longer be used for interscholastic meets because of its awkward length and poor positioning of the sprint lanes, and a new track was planned.
In 1983, as part of the massive Physical Education and Athletics Complex renovation, the field was fitted with subterranean drainage, leveled and planted with new grass. New stands were built in the hillside out of cement, lava rock and grass, and the previously dirt track receievd a new all-weather Mondo surface. The track was resurfaced in 1998, and again in 2010, with the latest Mondo surface.

Samuel Alexander was born in 1836 in what is now Hanalei, on the northern coast of Kaua'i. Among other schools, he attended Punahou various times between 1841 and 1859. In 1863, Alexander became manager of the Waihe'e sugar plantation near Wailuku, Maui.
Co-founder of Alexander & Baldwin, Inc., which became oen of the "Big Five" corporations to dominate the economy of the Territory of Hawai'i, he and partner Henry Baldwin became agents for nearly a dozen plantations.
Alexander, his eight siblings, his wife Martha Eliza Cooke, and their four children all attended Punahou. His brother William DeWitt Alexander was also a teacher and Trustee of Punahou.
Back