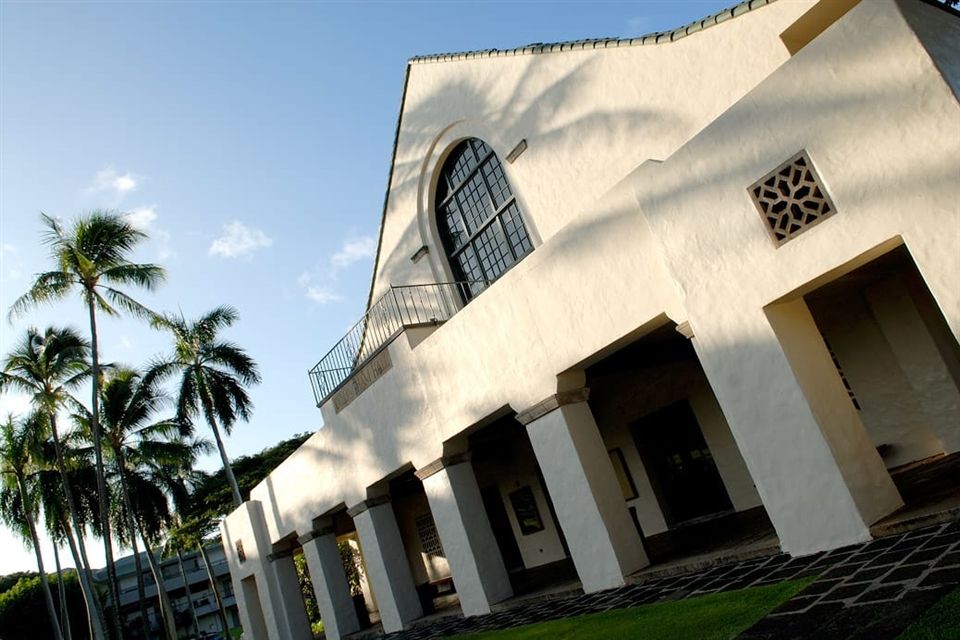 Dillingham Hall is the theater space for Punahou School, housing a 640-seat auditorium with a 32' proscenium orchestra pit, as well as an intimate drama workshop, a scene shop, a costume shop with over 10,000 costumes, and offices for the theater program. It is used by all grade levels for assemblies, as well as for dance and music programs.
The Box Office for Dillingham Hall is located in the Sullivan Administration Building, and is only operational during the ticket sale period for each production.

As a gift for the Jubilee Anniversary of Punahou in 1916, Mr. and Mrs. B. F. Dillingham gave $75,000 towards an assembly hall, to accommodate the growing student body and replace the inadequate auditorium in Pauahi Hall.
The hall was designed by Bertram G. Goodhue, but construction was delayed by the war (WWI). By the time building plans were finalized, construction costs had doubled. In 1927, the Dillingham family committed to covering the entire cost of the project as contracted to Dillingham & Co., and construction was then completed in 1929.
Dillingham Hall was completely renovated in 1994, designed by Hardy Holzman Pfeiffer, to add a scene shop, costume shop, drama workshop and air conditioning. With the theatre's original box office converted to light and sound facilities, a box office space was created in the adjoining Sullivan Administration Building.

Benjamin Franklin (Frank) Dillingham was born in Massachusetts in 1844 and left school to sail to San Francisco at the age of 14. Seven years later, still a sailor, he broke his leg in Hawaii and missed the return voyage of his ship.
In 1869, he married Emma Louise Smith, daughter of the Rev. Lowell Smith who had cared for him in the hospital. The same year, he bought out the hardware dealership of H. Dimond, where he had clerked for four years.
Dillingham & Co. was the forerunner of a great commercial success, but Frank Dillingham is better known for his vision of cultivating sugar in central Oahu and connecting the lands by railroad.
Back